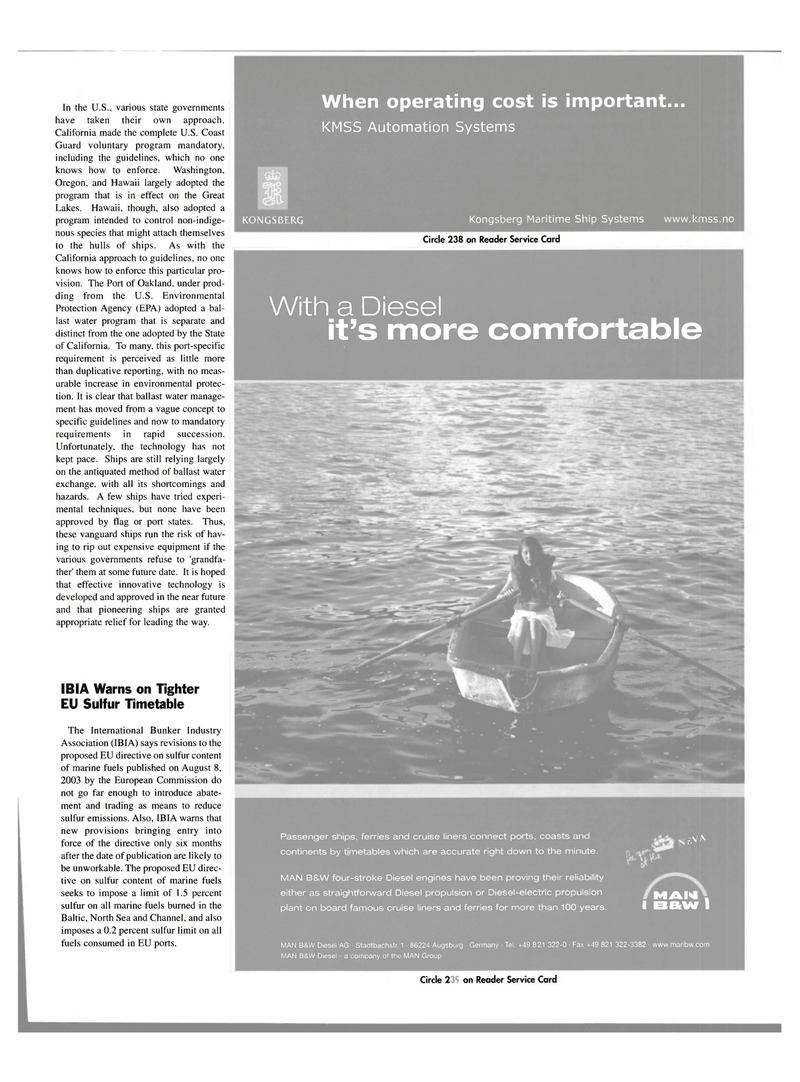 In the U.S., various state governments have taken their own approach.

California made the complete U.S. Coast

Guard voluntary program mandatory, including the guidelines, which no one knows how to enforce. Washington.

Oregon, and Hawaii largely adopted the program that is in effect on the Great

Lakes. Hawaii, though, also adopted a program intended to control non-indige- nous species that might attach themselves to the hulls of ships. As with the

California approach to guidelines, no one knows how to enforce this particular pro- vision. The Port of Oakland, under prod- ding from the U.S. Environmental

Protection Agency (EPA) adopted a bal- last water program that is separate and distinct from the one adopted by the State of California. To many, this port-specific requirement is perceived as little more than duplicative reporting, with no meas- urable increase in environmental protec- tion. It is clear that ballast water manage- ment has moved from a vague concept to specific guidelines and now to mandatory requirements in rapid succession.

Unfortunately, the technology has not kept pace. Ships are still relying largely on the antiquated method of ballast water exchange, with all its shortcomings and hazards. A few ships have tried experi- mental techniques, but none have been approved by flag or port states. Thus, these vanguard ships run the risk of hav- ing to rip out expensive equipment if the various governments refuse to 'grandfa- ther' them at some future date. It is hoped that effective innovative technology is developed and approved in the near future and that pioneering ships are granted appropriate relief for leading the way.

Association (IBIA) says revisions to the proposed EU directive on sulfur content of marine fuels published on August 8, 2003 by the European Commission do not go far enough to introduce abate- ment and trading as means to reduce sulfur emissions. Also, IBIA warns that new provisions bringing entry into force of the directive only six months after the date of publication are likely to be unworkable. The proposed EU direc- tive on sulfur content of marine fuels seeks to impose a limit of 1.5 percent sulfur on all marine fuels burned in the

Baltic, North Sea and Channel, and also imposes a 0.2 percent sulfur limit on all fuels consumed in EU ports.

When operating cost is important...

With a Diesel it's more comfortable

Passenger ships, ferries and cruise liners connect ports, coasts and continents by timetables which are accurate right down to the minute.

MAN B&W four-stroke Diesel engines have been proving their reliability either as straightforward Diesel propulsion or Diesel-electric propulsion plant on board famous cruise liners and ferries for more than 100 years. Ni 1

MAN B&W Diesel - a company of the MAN Group