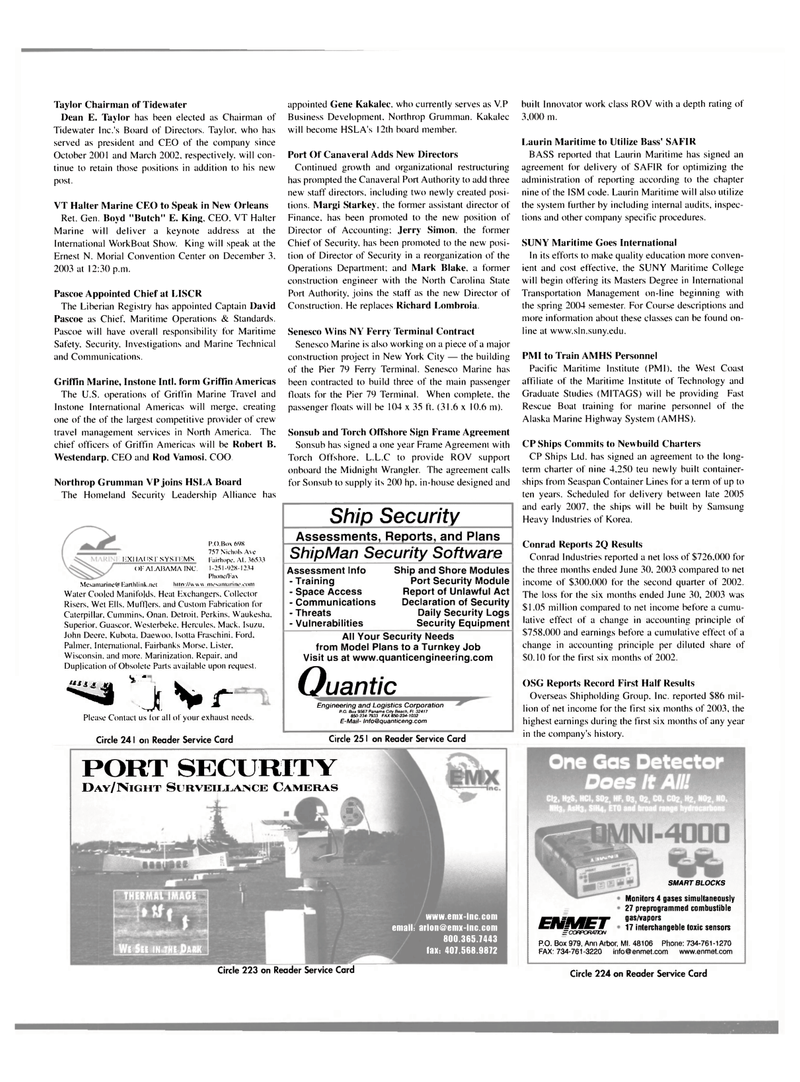 Dean E. Taylor has been elected as Chairman of

Tidewater Inc.'s Board of Directors. Taylor, who has served as president and CEO of the company since

October 2001 and March 2002, respectively, will con- tinue to retain those positions in addition to his new post.

Marine will deliver a keynote address at the

International WorkBoat Show. King will speak at the

Pascoe will have overall responsibility for Maritime

The U.S. operations of Griffin Marine Travel and

Instone International Americas will merge, creating one of the of the largest competitive provider of crew travel management services in North America. The chief officers of Griffin Americas will be Robert B.

The Homeland Security Leadership Alliance has

Wisconsin, and more. Marinization. Repair, and

Please Contact us tor all ot your exhaust needs.

Finance, has been promoted to the new position of

Chief of Security, has been promoted to the new posi- tion of Director of Security in a reorganization of the

Port Authority, joins the staff as the new Director of

Sonsub has signed a one year Frame Agreement with

Torch Offshore. L.L.C to provide ROV support onboard the Midnight Wrangler. The agreement calls for Sonsub to supply its 200 hp. in-house designed and built Innovator work class ROV with a depth rating of 3,000 m.

BASS reported that Laurin Maritime has signed an agreement for delivery of SAFIR for optimizing the administration of reporting according to the chapter nine of the ISM code. Laurin Maritime will also utilize the system further by including internal audits, inspec- tions and other company specific procedures.

In its efforts to make quality education more conven- ient and cost effective, the SUNY Maritime College will begin offering its Masters Degree in International

Transportation Management on-line beginning with the spring 2004 semester. For Course descriptions and more information about these classes can be found on- line at www.sln.suny.edu.

Rescue Boat training for marine personnel of the

CP Ships Ltd. has signed an agreement to the long- term charter of nine 4,250 teu newly built container- ships from Seaspan Container Lines for a term of up to ten years. Scheduled for delivery between late 2005 and early 2007, the ships will be built by Samsung

All Your Security Needs from Model Plans to a Turnkey Job