The United States, like all other nations, has required from its founding that manifests of imported cargo be filed with its Customs agency. Traditionally, the manifest was filed (or "presented") when the ship arrived in port. Official entry was not completed and cargo could not be unladed until the manifest was presented.

This process was drastically reworked following the horrific terrorist attacks of September 11, 2001. The U.S. Customs Service, since reorganized into the Bureau of Customs and Border Protection (CBP), demanded that the information be provided earlier and in greater detail.

24-Hour Rule On October 31, 2002, Customs promulgated the so-called "24-Hour Rule." This rule required carriers to present to Customs a copy of the vessel's manifest at least 24 hours prior to lading the cargo on the vessel in a foreign port if the vessel was bound for a U.S. port with that cargo on board. For vessels carrying bulk cargo or specially-designated break-bulk cargo, the manifest did not have to be presented to Customs until at least 24 hours prior to the vessel's arrival in its first U.S. port.

Cargo Listing The carrier is required to present an accurate and complete vessel cargo declaration.

A precise description of the cargo (or the Harmonized Tariff Schedule [HTS| numbers to the 6-digit level) must be included in the declaration.

Generic descriptions, such as 'freight of all kinds' (FAK), 'general cargo', and 'said to contain' (STC) will not be accepted. Likewise, general characterizations, such as 'chemicals' or 'foodstuffs' will be considered overbroad.

The carrier should not accept cargo from a shipper unless the description provided is consistent with the above requirements.

The numbers and quantities of cargo must be reported in the lowest external packaging unit. For example, if a container holds 10 pallets of an item with 20 cartons on each pallet, the cargo should be reported as 200 cartons.

For sealed containers, the seal number of the last person or company to load the container must be listed. Participants in the Customs-Trade Partnership Against Terrorism (C-TPAT) must affix seals to all loaded containers.

Consignee If there is a consignee of the cargo, that consignee must be identified. If there is no consignee (as when the shipment is 'to order'), the cargo owner or owner's representative must be listed.

Shipper The manifest is required to identify the shipper of the cargo. For this purpose the shipper was defined as "the shipper's complete name and address, or identification number, from all bills of lading." Carrier Prior to the 24-Hour Rule, entry was made and the manifest was presented by the master of the vessel. When the manifest had to be presented earlier than ves- sel arrival under the 24-Hour Rule, responsibility was placed by Customs on the "carrier." The problem was that Customs did not clearly define the term.

The agency states that the carrier is the owner, bareboat charterer, or other entity responsible for the vessel. This definition is not particularly helpful.

Obviously the owner and the bareboat charterer qualify - and they will retain the ultimate obligation. Experience and common sense show that this filing responsibility, though, can be delegated.

Ship managers routinely agree by contract to undertake Customs filings and related duties. There is also nothing to prevent a time, voyage, or slot charterer from agreeing to perform such filings.

A large shipping company that operates numerous vessels under its banner should likewise be able to assume this responsibility for all ships in its "fleet" if it so elects. In any event, the owner and bareboat charterer must bear in mind that they remain liable to CBP for completion of these tasks. A non-vesseloperating common carrier (NVOCC) is also a carrier for purposes of this regulation and is required to file its own report.

The 24-Hour Rule entered into effect on December 2, 2002. Whatever entity assumed the advance manifest reporting requirements of this rule became a carrier for Customs purposes. As noted above, though, the owner and bareboat charterer also retained responsibility for ensuring that the reports were made in a timely and accurate manner.

Presentation When the 24-Hour Rule was promulgated, carriers were provided a variety of methods for presenting the advance manifest to Customs. Presentation could be done by means of a courier, via facsimile (fax) transmission, or electronically by means of the Automated Manifest System (AMS). If AMS was utilized, the carrier was required to register with Customs and obtain an appropriate electronic interface, to have a Standard Carrier Alpha Code (SCAC), and to have access to an International Carrier Bond (ICB). If the carrier did not have and didn't want to acquire its own electronic interface, there are approved third parties that provide this service for a fee. Also, carriers were also allowed to utilize the ICB of their local port agent, rather than having to obtain their own bond.

The new rule, which came into effect on March 4, 2004, eliminates the other presentation options and mandates that all advance cargo manifests be presented electronically by means of the Automated Manifest System (AMS).

For bulk carriers, specially designated break-bulk carriers, and passenger vessels, enforcement has been delayed until April 2, 2004. AMS began in 1986 as an experiment and was intended to accelerate the flow of commerce. It is now being turned into a security tool, a task for which it was not designed and for which it is only partially suited. As noted above, carriers must register with the CBP and have appropriate telecommunications capability in order to par- ticipate in AMS. Alternatively, carriers may work through an Authorized Data Processing Service.

Standard Carrier Alpha Code - SCAC The cargo manifest must include the carrier's Standard Carrier Alpha Code (SCAC). While many carriers had acquired their own SCAC previously, it was voluntary in nature. It has now become mandatory under the rule. The SCAC can only be obtained from the National Motor Freight Traffic Association. The SCAC may be obtained by just about any entity engaged in the transportation business.

In the marine sector, an application may be submitted by a steamship agent, a steamship company, a barge line, a car ferry, a tug boat operation, or any other "company engaged in transportation by vessel over a body of water".

International Carrier Bond - ICB Previously, the carrier could, if so authorized, make use of the local port agent's international carrier bond (ICB) to ensure payment of any assessed duties, civil penalties, etc. Under the Advance Electronic Presentation Rule, the carrier must have its own ICB. The ICB must be obtained through a bonding company authorized to provide such bonds. The ICB can also be costly, but it can be used to cover a variety of Customs penalties, not just those directly related to this reporting requirement.

CBP regulation provides that the ICB binds the obligators, which means the principal and the surety. The principal is defined as the carrier. Thus, the entity that assumes the role of carrier for purposes of filing the advance cargo information via AMS is the entity that becomes the principal for purposes of the ICB. The regulation and the Customs Bond application form (CF 301) provide for either a single transaction bond or a continuous bond, at the applicants' option. CBP reserves the right, though, to place conditions on the bond or to require an increased amount.

The minimum amount for purposes of this regulation appears to be $50,000, but that is obviously subject to change.

The CF 301 should be submitted to the Customs Director for the U.S. port most frequently utilized by the carrier.

Normally, a carrier will want to obtain a continuous bond, which may be utilized by multiple vessels and for multiple port calls.

Consignee The consignee is the party to whom the cargo is to be delivered in the United States, with the exception of freight cargo remaining on board (FROB). In the case of cargo being shipped "to the order of (a named party)", the consignee is the named party. If there is any other commercial party listed in the bill of lading for delivery or contact purposes, the carrier must report this other commercial party's identity and contact information (address) in the "Notify Party" field of the electronic data transmission to CBP.

The extent of the carrier's information is generally limited to that found on the bill of lading. On February 23, 2004, CBP issued a Notice stating that is delaying indefinitely implementation of the change to the "shipper" element of the advance manifest filing requirement as provided for in its Advance Electronic Presentation Rule. The purpose of the indefinite delay is to allow CBP time to review a petition submitted by trade representatives challenging the definition of shipper. Until this issue is resolved. CBP will continue to enforce the requirements for the data element "shipper" as promulgated in the 24-Hour Rule.

Export Cargo Similar reporting requirements have been promulgated with regard to cargo to be exported from the United States by ship. The major difference is that the burden of filing the export report has been placed on the exporter, rather than the carrier. The duty placed on the carrier is limited to ensuring receipt from the exporter of the appropriate confirmation that the required reports have been made. CBP has yet to announce the date on which this export report requirement will come into effect.

Summary Under the combined effect of the 24- Hour Rule and the Advance Electronic Presentation Rule, the paperwork related to bringing cargo to the United States by vessel has become significantly more complicated. Implementation of these requirements has not been made any easier by the short deadlines imposed by CBP. As a result of those short deadlines, difficulties with issues such as assigning responsibility for acting as the carrier and identifying the shipper have generated problems that would have been avoidable if a more measured pace of regulatory development had been adopted. Further, CBP made minimal effort to educate the regulated community about the need for the SCAC and the ICB. Unfortunately, the industry is now in the unenviable position of having to adapt to the new rules in an artificially short time frame, with the agency making last minute changes as problems surface. Hopefully, changes coming with regard to the export process will prove more manageable. 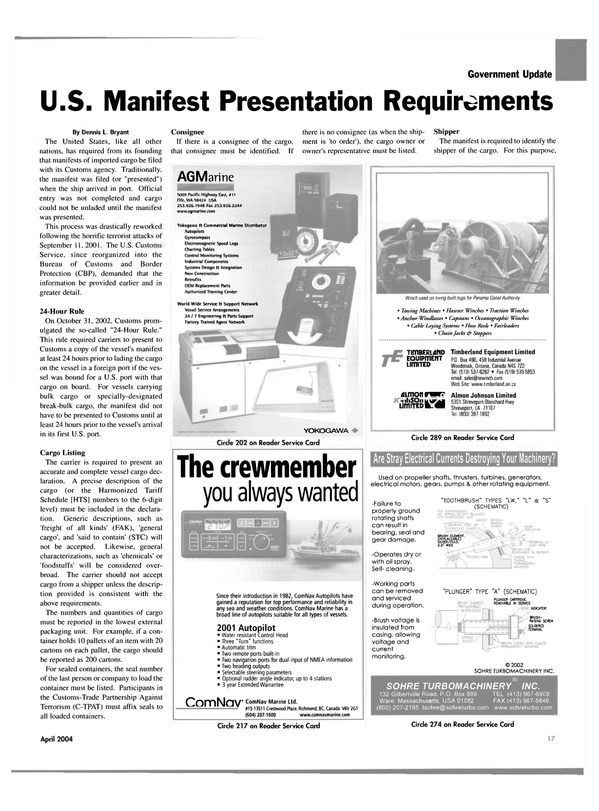 Other stories from April 2004 issue