Burger Boat's on a Binge

Wis., has emerged as a premier builder of U.S. megayachts, with a number of projects in the pipeline, most notably the Mirgab V (pronounced meergahb).

In fact, history was made when the company announced Mirgab V. as at 144-ft. (44 m), the Tri-Deck vessel is the largest single, new yacht construction project in its 141-year history: The project represents a quantum leap for the builder who just eight months before this contract was announced had launched the largest Burger ever, the 127-ft. Tri-deck for Mr. and Mrs. Charles Walgreen, Jr.

"There has been an unprecedented amount of interest in larger vessels and securing this very special project validates our commitment to this vital segment of the market." said David Ross.

President & CEO of Burger Boat Company. In order to accommodate the larger range of yachts, the company built new facilities in the form of a state-of-the-art, 42,000-sq.-ft. worldclass manufacturing complex, which was completed in July 2004. Mirgab V was commissioned by the Alshaya family, a well-known and highly respected Kuwaiti family who has owned several yachts and plans to base the vessel in the Mediterranean on the French Riviera. Mirgab V will be ABS certified and will be Burger's first fully MCA compliant yacht which will further elevate the company's impressive reputation for quality construction.

Mirgab V will have several very unique features including side deck bulwarks that fold down into a verandah.

an integral swim platform that converts to a grand stairway to the sea, a pneumatic circular elevator that raises three deck levels, seven staterooms in the owner's party and five in the crew's area. Delivery is scheduled for the summer of 2006. 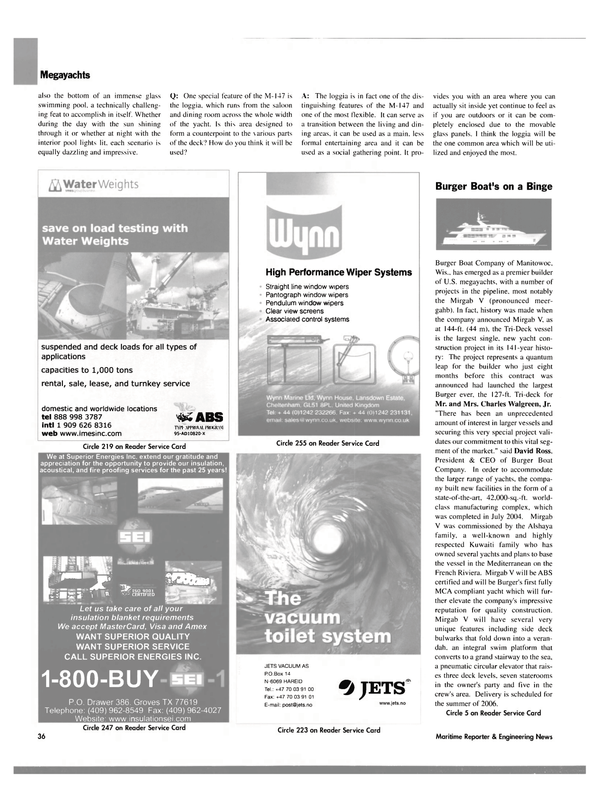 Read Burger Boat's on a Binge in Pdf, Flash or Html5 edition of October 2004 Maritime Reporter