The total value of the contracts is approximately $325 million Canadian.

While the order confirms the German yard's prowess, it has sparked a fair amount of controversy, particularly from Canadian shipbuilders.

We have contended all along that BC shipyards and their workers have been denied the opportunity to present a very competitive, risk-free bid package that would include acceptable delivery schedules at a guaranteed price.

Over the past 40 years, the BC ferry system has grown from two vessels and a couple hundred employees to over 30 vessels and 3200 employees. BC Ferry Services arguably sets the standard for world-class ferry systems. The ironic part of the current strategy of this management and this Board is that they are abandoning the very assets and people that helped them reach world prominence over those 40 years.

We wish to tlumk our workers, the Shipyard GeneraI Workers Federation and the many Members of the BC Legislative Assembly (MLA's) and Members of Parliament (MP's) for their efforts in presenting the industry's case to the public of British Columbia and to BC Ferry Services Inc.

We certainly wish BC Ferries success in their current endeavor; the consequences of failure would certainly have cm adverse impact on the transportation system that British Columbian citizens have become accustomed to. We stand ready to play a role in the future success of BC Ferries and the success of this Province as a whole.

The first new Super C-class vessel is scheduled to leave Flensburger Shipyard in October 2007, the second in January 2008 and the third in May 2008. 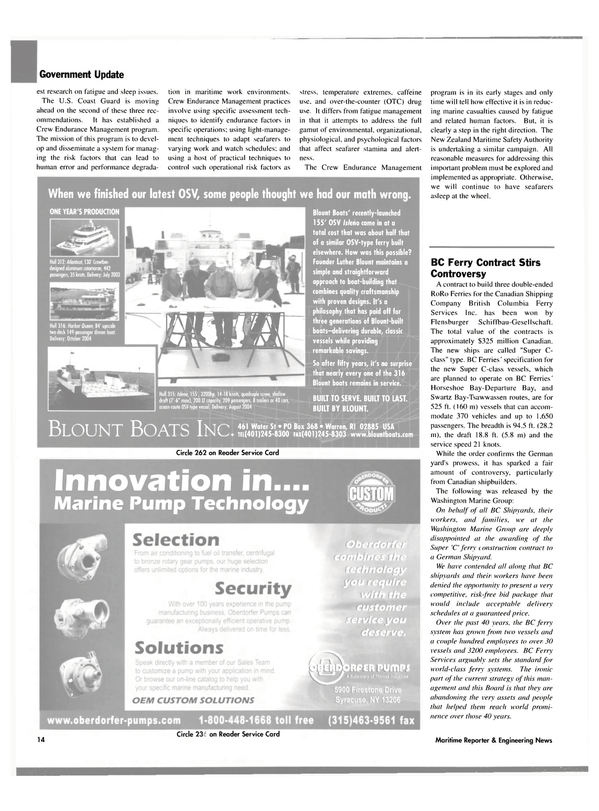