National Steel and Shipbuilding Company (NASSCO) has begun construction on the second ship in the TAKE program, a new class of combat logistics force ships designated the Lewis and Clark class. Mrs. DeAnne Sutton, wife of U.S. Navy Commander George Sutton of the NAVSEA Program Office, made the first cut on the ship's first steel plate to signify the start of construction.

The U.S. Navy has awarded NASSCO contracts for six new dry cargo/ammuni- tion ships for a total contract value of SI.87 billion. The T-AKE contract includes options for an additional six ships, eventually creating a 12-ship fleet of new combat logistics force ships. If all the options are exercised, the 12-ship program would have a total value of $3.7 billion and become the largest contract in NASSCO's history. The first TAKE.

which has been under construction at NASSCO for a year, will be named the Lewis and Clark.

This ship, the second T-AKE. is to be named the Sacagawea in honor of the Shoshone Indian woman who acted as guide and interpreter for Lewis and Clark on their expedition into the Northwest region of the United States from 1804-1806. 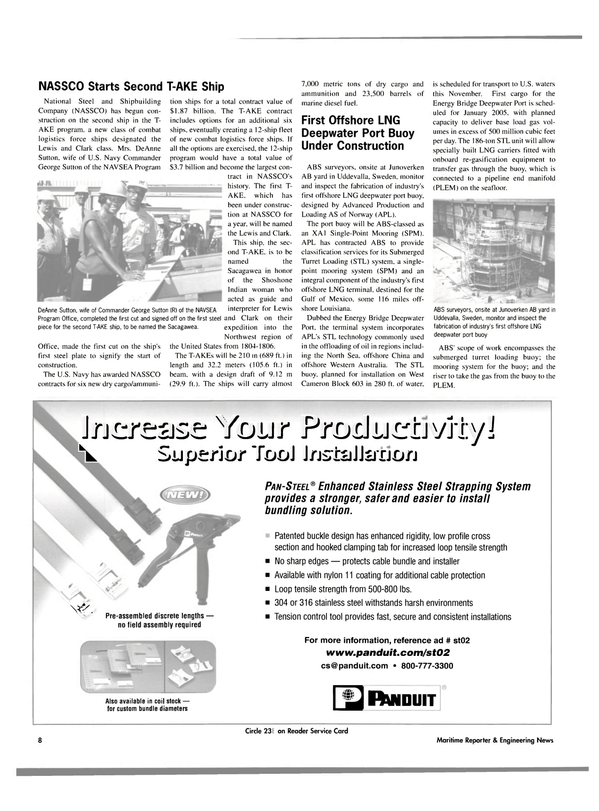