The MV Union Manta, operated hy the URS Towage & Salvage Union, Ltd., is designed to assist offshore lifting platforms in the construction of oil drilling rigs, oil and gas production plants, storage spars, and other related at-sea construction. The vessel was delivered on March 21, 2003, and currently operates throughout the Gulf of Mexico. The vessel is fitted with three large winches used for the handling and positioning of offshore platform mooring anchors Main power is supplied by two 10,000 hp diesel en gines, producing 'pull power' of 205 tons. This makes he Union Manta one of the world's largest and most powerful Anchor- Handling Towing Tugs.

In addition to these power features, the vessel is equipped for stand-alone remole operated vehicles (ROV) and survey jobs. The vessel is outfitted to accommodate up to 37 persons including a dedicated full-time crew of 15 and as many as 22 additional subcontractors.

On board there are engineering specialists who operate the ROVs, which are small, unmanned submarines equipped with cameras and robot arms for operation down to depths of 6,000 ft. The ROVs are used to inspect existing pipelines, conduct pre-lay sea floor inspections, and position and fit pipeline protective covers on the seabed.

We also want our surveyors on board to have access to the Internet if needed to run their applications," said Gert Bogaerts of URS' ICT department.

"We also needed a way to manage these computer systems from our head-office. There are no IT person- nel present on board of the vessel, so the IT department must have 24/7 access in case of a problem. Because of this, we needed a stable system which is 'always online' with highly reliable mail delivery." Bogaerts noted.

The owners of the Union Manta conducted a thorough evaluation of at-sea communications systems to find the best solution that delivers constant and reliable communications for the transfer of massive amounts of online data that is suited for a relatively small number of users.

"Marlink's Fleet F77 Mobile Packet Data Service (MPDS), via Inmarsat is the solution we chose to install and use aboard the Union Manta." "For use on our newly-built Union Manta we were seeking a system that gives us the possibility to provide a business network on board while giving us the opportunity to provide a reliable mail system to both our crew and the surveyors," Bogaerts said. "Therefore, we decided to install a Windows 2003 server running MS Exchange Server with four client PCs. For the future, we are considering running other applications on this network with a real-time connection to our head-office in Antwerp. Belgium." "To make this connection possible we opted in the first place for the Inmarsat Fleet F77 system from Thrane & Thrane. After the ship had been operational for about three months, we decided to add a second Fleet F77 system. This time, we chose the Nera System. This was done to provide a backup system in case the first unit is out of order.

"The Inmarsat Fleet F77 MPDS system, with service from Marlink. gives us a very easy solution for aroundthe- clock online communications. We can exchange emails whenever we want and we can contact the ship's computers for maintenance/troubleshooting from our head office using a VPN tunnel. The UDI connection may be faster but we prefer to have an 'always on' system." Bogaerts concluded. 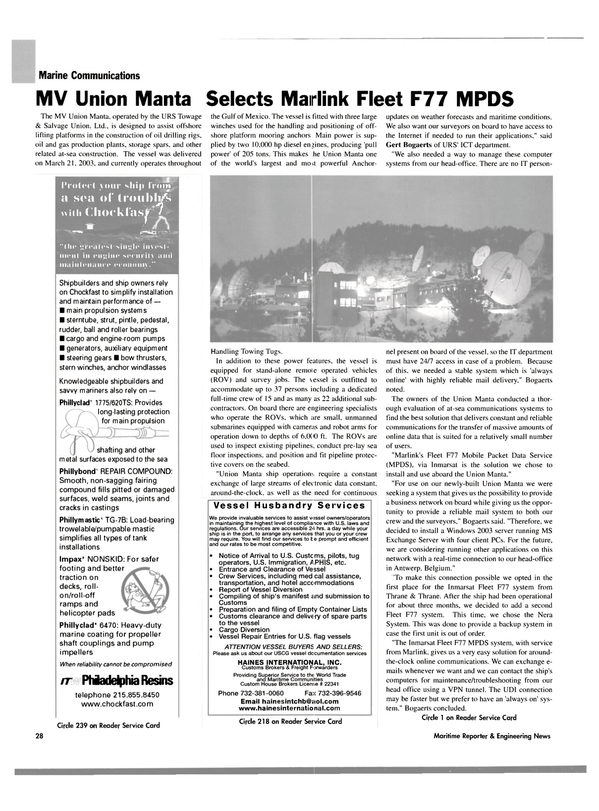