Read this page in Pdf, Flash or Html5 edition of May 2005 Maritime Reporter Magazine 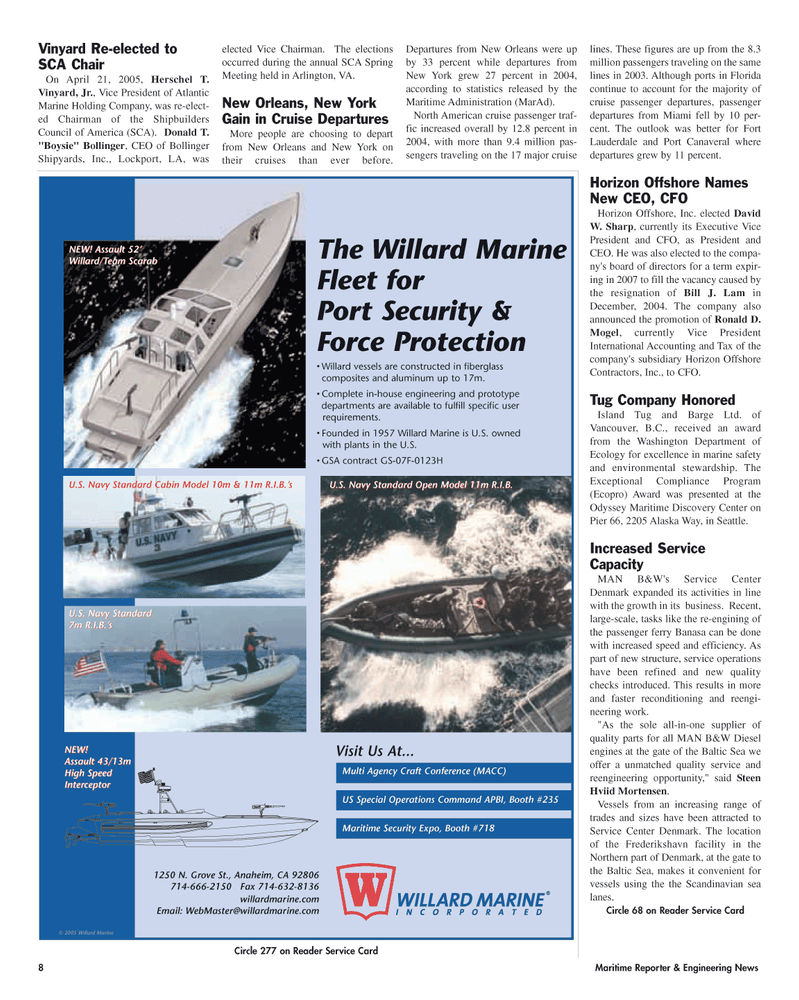 Marine Holding Company, was re-elect- ed Chairman of the Shipbuilders

More people are choosing to depart from New Orleans and New York on their cruises than ever before.

New York grew 27 percent in 2004, according to statistics released by the

North American cruise passenger traf- fic increased overall by 12.8 percent in 2004, with more than 9.4 million pas- sengers traveling on the 17 major cruise lines. These figures are up from the 8.3 million passengers traveling on the same lines in 2003. Although ports in Florida continue to account for the majority of cruise passenger departures, passenger departures from Miami fell by 10 per- cent. The outlook was better for Fort

Lauderdale and Port Canaveral where departures grew by 11 percent.

CEO. He was also elected to the compa- ny's board of directors for a term expir- ing in 2007 to fill the vacancy caused by the resignation of Bill J. Lam in

December, 2004. The company also announced the promotion of Ronald D.

International Accounting and Tax of the company's subsidiary Horizon Offshore

Island Tug and Barge Ltd. of

Vancouver, B.C., received an award from the Washington Department of

Ecology for excellence in marine safety and environmental stewardship. The

Exceptional Compliance Program (Ecopro) Award was presented at the

Denmark expanded its activities in line with the growth in its business. Recent, large-scale, tasks like the re-engining of the passenger ferry Banasa can be done with increased speed and efficiency. As part of new structure, service operations have been refined and new quality checks introduced. This results in more and faster reconditioning and reengi- neering work. "As the sole all-in-one supplier of quality parts for all MAN B&W Diesel engines at the gate of the Baltic Sea we offer a unmatched quality service and reengineering opportunity," said Steen

Service Center Denmark. The location of the Frederikshavn facility in the

Northern part of Denmark, at the gate to the Baltic Sea, makes it convenient for vessels using the the Scandinavian sea lanes.

Willard vessels are constructed in fiberglass composites and aluminum up to 17m. •