Alternative to Diesel Strengthens as Barriers Continue to Fall.

From the earliest days of mechanically propelled ships, fuel use has been evolving.  Starting with wood, fuel changed to coal, which held sway for many years.  Oil began to be used in the late nineteenth century and was clearly the dominate marine fuel of the twentieth century.  Environmental shortcomings of fuel oil, particularly traditional heavy bunkers, were brought under increasing scrutiny as the twentieth century came to a close.  As air emission regulations became more strict and petroleum costs increased, ship owners and operators began searching for an alternative fuel.  Consideration may be given to non-fossil-fuels, but all have practical drawbacks.  Among the available fossil fuels, natural gas is the cleanest – and the price has been dropping in recent years.

Natural gas is composed largely of methane (at least 90%, with the remainder being primarily ethane, propane and butane).  Methane is the most basic of the hydrocarbons, being composed of one atom of carbon and four atoms of hydrogen – CH4.  On combustion, it turns into carbon dioxide and water.  Commercial natural gas contains minimal amounts of extraneous substances, such as sulfur and nitrogen, so there are few pollutant byproducts.

Due in large part to fracking and horizontal drilling, the market price of natural gas has plummeted.  The combination of environmental compliance requirements and decreasing price are making LNG an attractive alternative fuel for ship propulsion.  Actually, the engines burn natural gas, not LNG – the LNG has been returned to its gaseous state as natural gas in the process of moving from the LNG fuel tanks to the engine’s combustion chamber.

A problem with natural gas, though, is that, because it is a gas, it occupies a very large space.  If cooled to -162°C, it becomes liquefied natural gas (LNG) and occupies one-six hundredth (1/600th) as much space.  In this state, it becomes practical to store and transport for use as a fuel.

Currently, the major drawback to use of LNG as a marine fuel is the lack of infrastructure.  There are relatively few places in the world where a marine vessel powered by LNG can conveniently refuel (bunker).  This is changing, and rapidly.  An increasing number of seagoing vessels are being built to operate on LNG, either exclusively or as part of a dual-fuel arrangement.


Norway was the incubator for commercial use of LNG as a marine fuel and remains its epicenter.
The fish food carrier Høydal is apparently the first sea-going vessel to use LNG as its sole fuel for propulsion.  The 2,692 gross ton cargo ship entered service on June 20, 2012 carrying fish products for the Norwegian fish farming industry.  In May 2013, its owner, Eidsvaag AS, took delivery of a second LNG –powered fish products carrier, Eidsvaag Pioner, constructed on an Environship design.

The platform supply vessel Island Crusader, delivered in May 2012, operates on LNG as it services facilities on the Norwegian continental shelf, using lean burn gas engines.  It is also equipped with two diesel engines for use when it is necessary for the vessel to extend its range.  Its LNG-powered sister ship Island Contender was delivered in October 2012.  LNG-powered tugs for use in Norwegian ports are under construction.

LNG as a marine fuel is also entering the market in other European nations.  In Finland, the ferry Viking Grace uses LNG as it transits between Turku and Stockholm.  On March 20, 2013, Shell Shipping & Maritime launched in the Netherlands the world’s first powered barge fueled exclusively by LNG.  The tank barge will be used to deliver petroleum products to customers on the Rhine and its tributaries in the Netherlands, Belgium, Germany, and Switzerland.
Lauro Shipping in Italy has contracted to acquire several LNG-powered passenger/automobile ferries for use in the Mediterranean.  A high-speed passenger/automobile ferry is undergoing sea trials prior to use by Buquebus on its route between Buenos Aires and Montevideo.  Another passenger/automobile ferry is under construction for operation on the St. Lawrence River by Société des traversiers du Québec.  In Vancouver, BC Ferries is considering conversion of some of its ferries to LNG fuel.

The United States is now set to become active in the use of LNG as a marine fuel.  Harvey Gulf has contracted for a series of six dual-fuel offshore supply vessels (OSVs) intended to operate primarily on LNG.  Its competitors in the Gulf of Mexico are taking note.  Totem Ocean Trailer Express (TOTE) is converting two of its container ships that trade between Puget Sound and Alaska to operate on LNG.  It is also having two new LNG-fueled container ships built for trade between Jacksonville and San Juan.  When placed in service, these will be the largest ships using LNG as a fuel, but they will probably not hold the record for long.

On May 6, 2013, Interlake Steamship Company of Middleburg Heights, Ohio announced plans to convert its fleet of vessels to operate on LNG.  Similar transition is under consideration for the Staten Island ferries, operated by the City of New York, which recently disclosed plans to convert one of its ferries to LNG fuel.  Horizon Lines is in the early stages of converting two of its container ships to operate on LNG fuel.

For those owners not quite ready to make the leap into the LNG marine fuel marketplace, naval architects and marine engineers are designing LNG-conversion-ready ships.  As their designation implies, these ships will be easily converted to operate on LNG marine fuel when their owners make the decision.  NASSCO Shipbuilders in San Diego recently announced that it entered into a contract with an affiliate of American Petroleum Tankers for design and construction of four 50,000 DWT LNG-conversion-ready product tankers.  The engines will be capable of dual-fuel operation and the design will include accommodation for an LNG fuel system.

Recognizing growth of the market for LNG as a marine fuel, Shell Oil Company recently acquired the Norwegian LNG fuel company Gasnor and announced plans for construction and operation of LNG bunkering facilities in the Gulf of Mexico region and in the Great Lakes region (by means of a natural gas liquefaction unit to be constructed at Sarnia, Ontario and with distribution capabilities throughout the Great Lakes and on the St. Lawrence).  Harvey Gulf announced plans to construct and operate an LNG bunkering facility in Port Fourchon, La. Press reports indicate that Shell recently signed a letter of intent for joint operation with a Chinese energy company of an LNG distribution and transfer station at Nantong port, just north of Shanghai.  Plans call for LNG bunkering of ships operating on the Yangtze River and waters adjacent to Shanghai.  Other energy companies are analyzing market opportunities.

As the landscape changes drastically, an area not receiving much attention is the indoctrination of management-level shipping personnel so that they can make informed decisions regarding whether LNG is an appropriate marine fuel for their situation.  There are many factors to consider in both the macro and micro perspective.  If the decision is made to include LNG in a company’s fuel mix, the personnel who will actually be involved in the bunkering and use of LNG will also need training.

Take action now, because, as Bob Dylan famously sang, “The times they are a-changin’.”

(As published in the July 2013 edition of Maritime Reporter & Engineering News - www.marinelink.com) 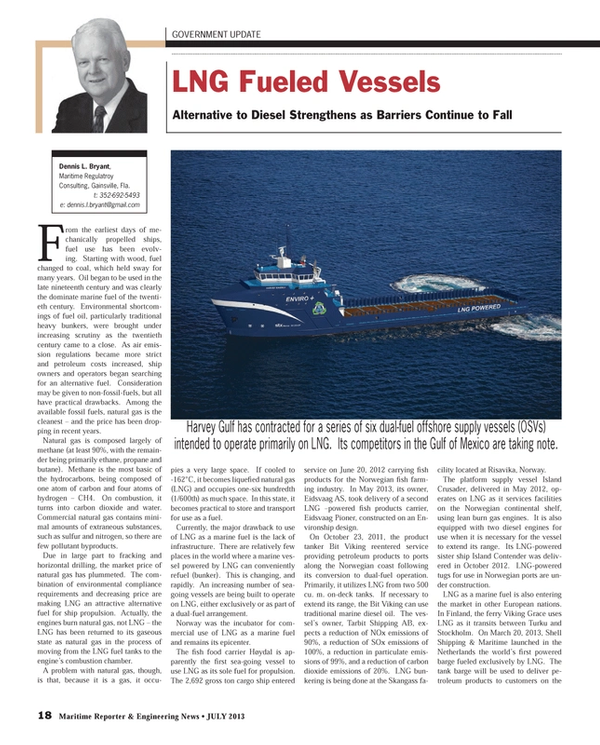 Other stories from July 2013 issue