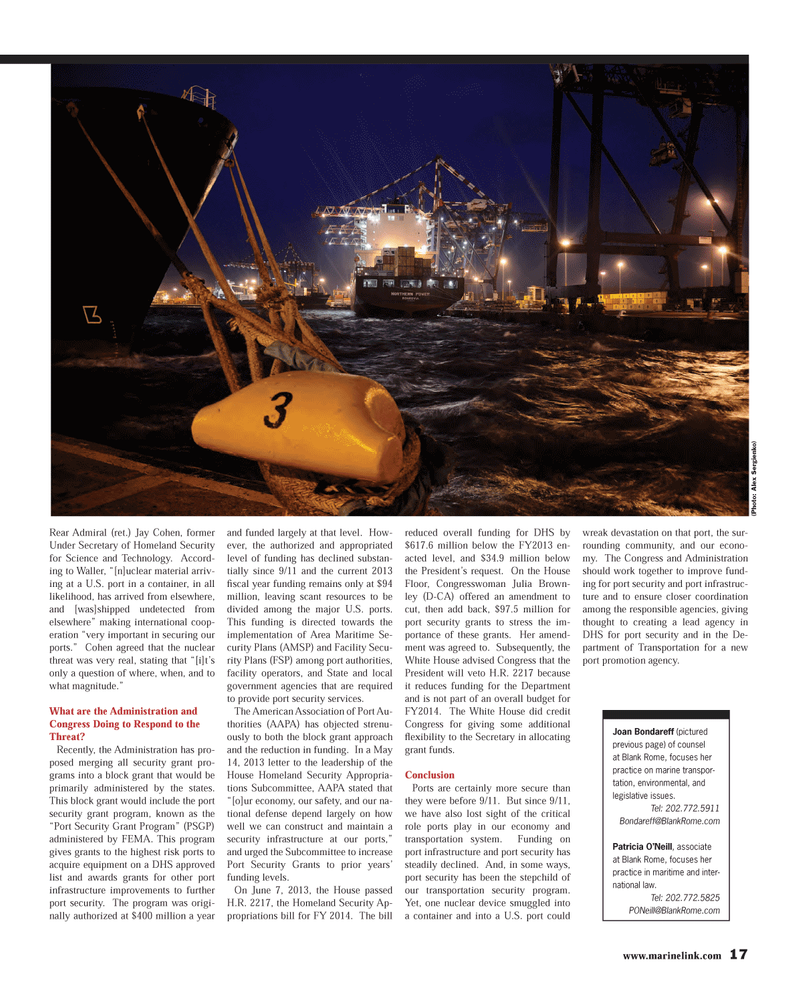 www.marinelink.com 17Joan Bondareff (pictured previous page) of counsel at Blank Rome, focuses her practice on marine transpor-tation, environmental, and legislative issues. Tel: 202.772.5911 Bondareff@BlankRome.com Patricia O?Neill, associate at Blank Rome, focuses her practice in maritime and inter-national law. Tel: 202.772.5825 PONeill@BlankRome.com(Photo: Alex Sergienko) Rear Admiral (ret.) Jay Cohen, former Under Secretary of Homeland Security for Science and Technology. Accord- ing to Waller, ?[n]uclear material arriv- ing at a U.S. port in a container, in all likelihood, has arrived from elsewhere, and [was]shipped undetected from elsewhere? making international coop-eration ?very important in securing our ports.? Cohen agreed that the nuclear threat was very real, stating that ?[i]t?s only a question of where, when, and to what magnitude.? What are the Administration and Congress Doing to Respond to the Threat? Recently, the Administration has pro- posed merging all security grant pro- grams into a block grant that would be primarily administered by the states. This block grant would include the port security grant program, known as the ?Port Security Grant Program? (PSGP) administered by FEMA. This program gives grants to the highest risk ports to acquire equipment on a DHS approved list and awards grants for other port infrastructure improvements to further port security. The program was origi- nally authorized at $400 million a year and funded largely at that level. How- ever, the authorized and appropriated level of funding has declined substan-tially since 9/11 and the current 2013 Þ scal year funding remains only at $94 million, leaving scant resources to be divided among the major U.S. ports. This funding is directed towards the implementation of Area Maritime Se- curity Plans (AMSP) and Facility Secu-rity Plans (FSP) among port authorities, facility operators, and State and local government agencies that are required to provide port security services. The American Association of Port Au- thorities (AAPA) has objected strenu- ously to both the block grant approach and the reduction in funding. In a May 14, 2013 letter to the leadership of the House Homeland Security Appropria- tions Subcommittee, AAPA stated that ?[o]ur economy, our safety, and our na- tional defense depend largely on how well we can construct and maintain a security infrastructure at our ports,? and urged the Subcommittee to increase Port Security Grants to prior years? funding levels. On June 7, 2013, the House passed H.R. 2217, the Homeland Security Ap- propriations bill for FY 2014. The bill reduced overall funding for DHS by $617.6 million below the FY2013 en-acted level, and $34.9 million below the President?s request. On the House Floor, Congresswoman Julia Brown- ley (D-CA) offered an amendment to cut, then add back, $97.5 million for port security grants to stress the im-portance of these grants. Her amend-ment was agreed to. Subsequently, the White House advised Congress that the President will veto H.R. 2217 because it reduces funding for the Department and is not part of an overall budget for FY2014. The White House did credit Congress for giving some additional ß exibility to the Secretary in allocating grant funds. ConclusionPorts are certainly more secure than they were before 9/11. But since 9/11, we have also lost sight of the critical role ports play in our economy and transportation system. Funding on port infrastructure and port security has steadily declined. And, in some ways, port security has been the stepchild of our transportation security program. Yet, one nuclear device smuggled into a container and into a U.S. port could wreak devastation on that port, the sur- rounding community, and our econo- my. The Congress and Administration should work together to improve fund-ing for port security and port infrastruc-ture and to ensure closer coordination among the responsible agencies, giving thought to creating a lead agency in DHS for port security and in the De-partment of Transportation for a new port promotion agency. MR #7 (10-17).indd 17MR #7 (10-17).indd 177/1/2013 8:55:18 AM7/1/2013 8:55:18 AM