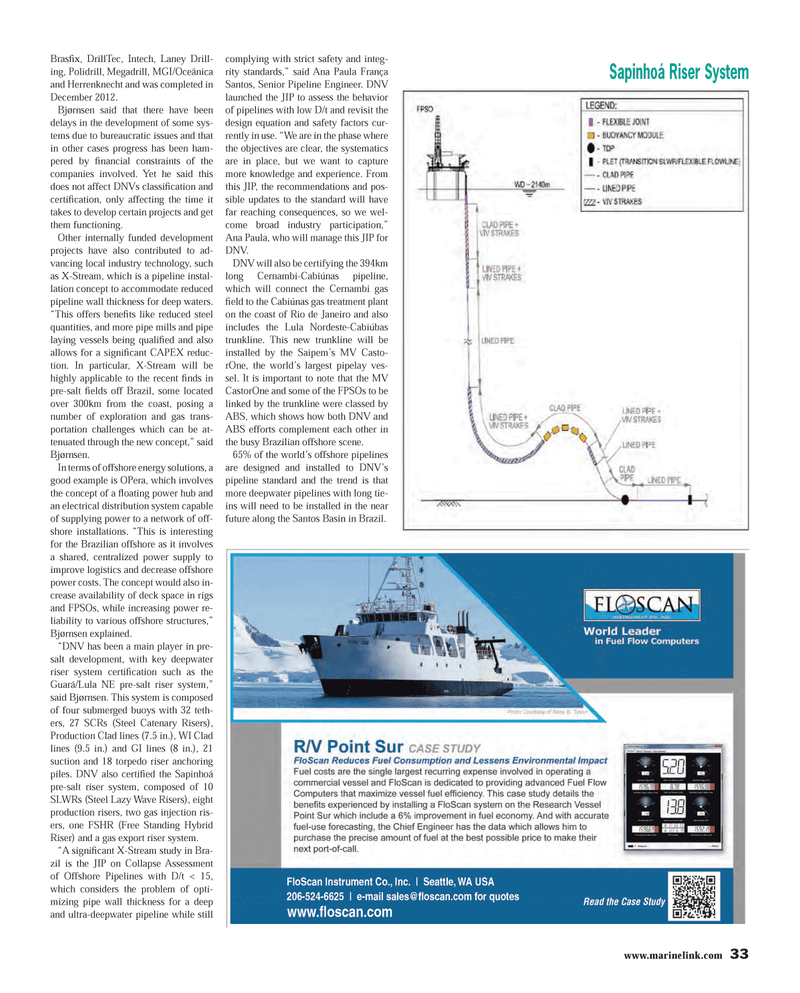 www.marinelink.com 33BrasÞ x, DrillTec, Intech, Laney Drill- ing, Polidrill, Megadrill, MGI/Oceânica and Herrenknecht and was completed in December 2012.Bjørnsen said that there have been delays in the development of some sys-tems due to bureaucratic issues and that in other cases progress has been ham-pered by Þ nancial constraints of the companies involved. Yet he said this does not affect DNVs classi Þ cation and certiÞ cation, only affecting the time it takes to develop certain projects and get them functioning.Other internally funded development projects have also contributed to ad-vancing local industry technology, such as X-Stream, which is a pipeline instal-lation concept to accommodate reduced pipeline wall thickness for deep waters. ?This offers bene Þ ts like reduced steel quantities, and more pipe mills and pipe laying vessels being qualiÞ ed and also allows for a signiÞ cant CAPEX reduc- tion. In particular, X-Stream will be highly applicable to the recent Þ nds in pre-salt Þ elds off Brazil, some located over 300km from the coast, posing a number of exploration and gas trans-portation challenges which can be at-tenuated through the new concept,? said Bjørnsen. In terms of offshore energy solutions, a good example is OPera, which involves the concept of a ß oating power hub and an electrical distribution system capable of supplying power to a network of off- shore installations. ?This is interesting for the Brazilian offshore as it involves a shared, centralized power supply to improve logistics and decrease offshore power costs. The concept would also in- crease availability of deck space in rigs and FPSOs, while increasing power re-liability to various offshore structures,? Bjørnsen explained.?DNV has been a main player in pre- salt development, with key deepwater riser system certiÞ cation such as the Guará/Lula NE pre-salt riser system,? said Bjørnsen. This system is composed of four submerged buoys with 32 teth- ers, 27 SCRs (Steel Catenary Risers), Production Clad lines (7.5 in.), WI Clad lines (9.5 in.) and GI lines (8 in.), 21 suction and 18 torpedo riser anchoring piles. DNV also certi Þ ed the Sapinhoá pre-salt riser system, composed of 10 SLWRs (Steel Lazy Wave Risers), eight production risers, two gas injection ris-ers, one FSHR (Free Standing Hybrid Riser) and a gas export riser system.?A signi Þ cant X-Stream study in Bra- zil is the JIP on Collapse Assessment of Offshore Pipelines with D/t < 15, which considers the problem of opti-mizing pipe wall thickness for a deep and ultra-deepwater pipeline while still complying with strict safety and integ-rity standards,? said Ana Paula França Santos, Senior Pipeline Engineer. DNV launched the JIP to assess the behavior of pipelines with low D/t and revisit the design equation and safety factors cur- rently in use. ?We are in the phase where the objectives are clear, the systematics are in place, but we want to capture more knowledge and experience. From this JIP, the recommendations and pos- sible updates to the standard will have far reaching consequences, so we wel-come broad industry participation,? Ana Paula, who will manage this JIP for DNV. DNV will also be certifying the 394km long Cernambi-Cabiúnas pipeline, which will connect the Cernambi gas Þ eld to the Cabiúnas gas treatment plant on the coast of Rio de Janeiro and also includes the Lula Nordeste-Cabiúbas trunkline. This new trunkline will be installed by the Saipem?s MV Casto- rOne, the world?s largest pipelay ves- sel. It is important to note that the MV CastorOne and some of the FPSOs to be linked by the trunkline were classed by ABS, which shows how both DNV and ABS efforts complement each other in the busy Brazilian offshore scene. 65% of the world?s offshore pipelines are designed and installed to DNV?s pipeline standard and the trend is that more deepwater pipelines with long tie-ins will need to be installed in the near future along the Santos Basin in Brazil. )OR6FDQ,QVWUXPHQW&R,QF_6HDWWOH:$86$ _HPDLOVDOHV#IORVFDQFRPIRUTXRWHV Read the Case StudyZZZIORVFDQFRP Sapinhoá Riser SystemMR #7 (26-33).indd 33MR #7 (26-33).indd 337/1/2013 9:23:49 AM7/1/2013 9:23:49 AM