On 17 January 1955, Commander Eugene P. Wilkinson, USN, the first Commanding Officer of USS Nautilus (SSN 571) signaled the memorable and historic message “Underway on nuclear power.”
Underway on LNG has an opportunity to signal an equally significant change in the merchant marine.

On February 6, 2015, the newly built Harvey Gulf International Marine offshore supply vessel (OSV) Harvey Energy was bunkered for the first time by liquefied natural gas (LNG) delivered by tank truck in Pascagoula, Miss.  After receiving classification from the American Bureau of Shipping (ABS) and a Certificate of Inspection from the US Coast Guard, Harvey Energy got underway for its homeport of Port Fourchon, Louisiana.  This event marked the first time that a vessel in North American waters has been underway powered by LNG – but it won’t be the last.
Harvey Energy was built by the Gulf Coast Shipyard in Gulfport, Mississippi, with careful monitoring by both ABS and the Coast Guard.  The Coast Guard recently promulgated policy letters addressing: (1) operations and training of personnel on vessels using natural gas as fuel; and (2) vessels and waterfront facilities conducting LNG marine fuel transfer (bunkering) operations.  The Coast Guard also has been working closely with the IMO in development of an International Code of Safety for Ships Using Gases or Other Low Flashpoint Fuels (IGF Code).  ABS, along with various other classification societies, has developed rules for classifying LNG-powered vessels.  Harvey Energy has been chartered to Shell for its deepwater operations in the Gulf of Mexico.  Two sister ships are under construction and three more are planned.  Harvey Gulf has built a bunkering facility in Port Fourchon for its LNG-powered OSVs.
While LNG-powered vessels are new to North America, such vessels have been operating in northern Europe (particularly in Norway) for several years.

TOTE and Sea Star Line
Two ships, destined to become the world’s first LNG-powered container ships, are under construction at the NASSCO shipyard in San Diego for TOTE Shipholdings.  When delivered in late 2015 and early 2016, these dual-fuel Marlin-class containerships will be operated by Sea Star Line.  Homeported in Jacksonville, Florida, they will carry containers between Jacksonville and San Juan, Puerto Rico.
TOTE is also converting its two Orca-class trailerships to operate on LNG.  These vessels will carry cargo (trucks, cars, trailer-borne material, military equipment, and project cargo) between Tacoma, Washington and Anchorage, Alaska, as they do now.  The process of conversion of North Star and Midnight Sun will begin in the fall of 2015.  Initially, the two trailerships will be fueled from an LNG bunker barge, but a shore-based bunkering facility is planned for construction in the Port of Tacoma.

Crowley
Crowley Maritime Corporation has awarded to VT Halter Marine of Pascagoula, Mississippi a contract for construction of two Commitment-class ConRo vessels.  These vessels, to be named El Coqui and Taino, will be powered by LNG and operate between Jacksonville and San Juan.  They will carry containers (approximately 2,400 TEU) and up to 400 vehicles each in their roll-on/roll-off garages.  Delivery is expected in the second and fourth quarters of 2017.
Crowley acquired Carib Energy in Puerto Rico and plans to deliver LNG to that island and others in the Caribbean Basin from Jacksonville using ISO tanks.

LNG-Ready Vessels and Conversions
Meanwhile, US shipyards are building LNG-ready vessels in increasing numbers.  These vessels have been designed so that conversion from more traditional fuels (such as diesel) to LNG can be easily accomplished.  Eleven LNG-ready product tankers and two LNG-ready containerships are under contract.  Several shipping companies have announced that they are seriously considering conversion of existing vessels to LNG power.  Horizon Lines obtained US Coast Guard approval for conversion of up to six of its containerships to LNG power.  Subsequently, Horizon Lines announced plans to sell all of its vessels.  It is unclear whether the new owners will pursue the conversions.

Bunker Barges & Infrastructure
One of the issues that has been restraining the use of LNG as a marine fuel in North America is the chicken and egg: should ship owners build LNG-fueled vessels expecting (hoping) that the infrastructure will quickly follow or should the infrastructure side build out LNG bunkering capability expecting (hoping) that ship owners will follow.  As it turned out, the chicken and egg are arriving simultaneously.  As mentioned above, Harvey Gulf is building both LNG-fueled OSVs and its own LNG bunkering facility.  WestPac Midstream and Clean Marine Energy are coordinating construction of an LNG bunkering barge at the Conrad Orange Shipyard in Orange, Texas.  The bunker barge will initially be deployed to Tacoma to service the TOTE Orca-class vessels and then relocate to Jacksonville to service the Sea Star Line Marlin-class vessels and others.  Meanwhile, LNG America and its partners are designing a hub-and-spoke LNG bunkering program for the Gulf coast to service LNG-fueled vessels and other high horsepower applications, as well as an LNG facility in Jacksonville with potential bunkering capability.

Oversight
As mentioned above, the US Coast Guard recently finalized major policy letters explaining its expectations regarding vessels operating on LNG fuel and the crew members who operate those vessels.  Classification societies have developed rules for use in classifying LNG-fueled vessels.  The IMO is close to issuing its code for LNG-fueled vessels (the IGF Code).  Much of this work has been based on the successful use of LNG as a marine fuel in Norway and other northern European nations.

Drivers
There are two major drivers in this seemingly rapid conversion to LNG propulsion.  First, air emission regulations for vessels operating in most waters of the United States and Canada have been significantly tightened.  Allowable emissions of sulfur oxides (SOx), nitrogen oxides (NOx), and particulate matter (PM) have been reduced.  Use of LNG rather than convention marine fuels such as diesel offer major reductions in these emissions, eliminating the need for use of such measures as selective catalytic reduction.  Second, due in large part to increased use of horizontal drilling and fracking, the amount of natural gas available on the market in North America has skyrocketed.  In a few short years, the United States has moved from being an importer to an exporter of LNG.  This has lowered the cost of natural gas to the point that it is less expensive, per BTU, than diesel.

Conclusion
On 17 January 1955, Commander Eugene P. Wilkinson, USN, the first Commanding Officer of USS Nautilus (SSN 571) signaled the memorable and historic message “Underway on nuclear power.”  The event initialed a major change in the United States Navy and elsewhere.  Underway on LNG has an opportunity to signal an equally significant change in the merchant marine on the United States and Canada.

(As published in the April 2015 edition of Maritime Reporter & Engineering News - http://magazines.marinelink.com/Magazines/MaritimeReporter) 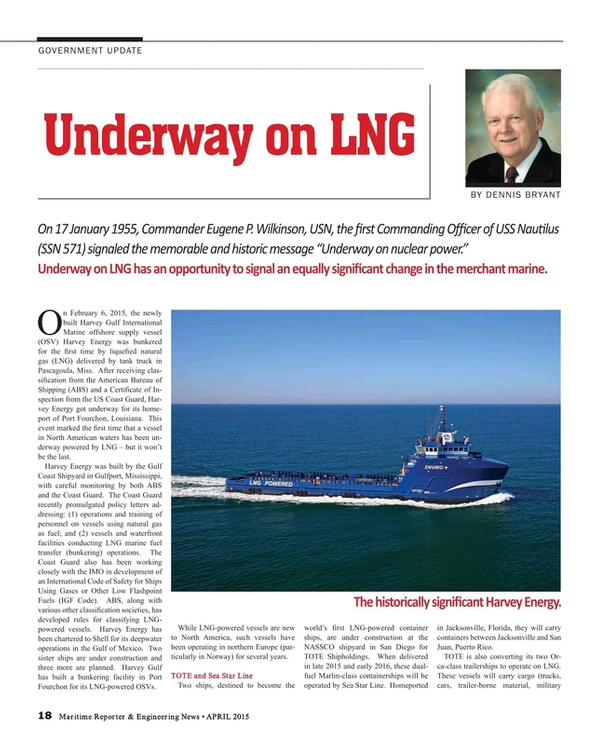 Other stories from April 2015 issue