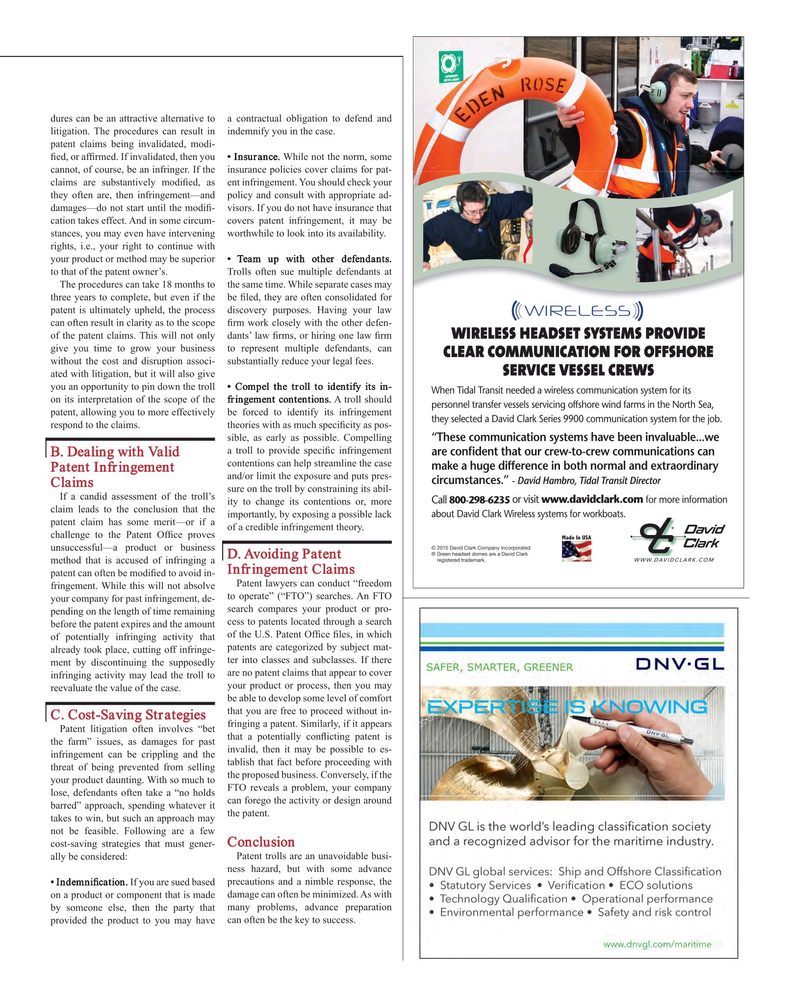 dures can be an attractive alternative to a contractual obligation to defend and litigation. The procedures can result in indemnify you in the case. patent claims being invalidated, modi- ? ed, or af? rmed. If invalidated, then you • Insurance. While not the norm, some cannot, of course, be an infringer. If the insurance policies cover claims for pat- claims are substantively modi? ed, as ent infringement. You should check your they often are, then infringement—and policy and consult with appropriate ad- damages—do not start until the modi? - visors. If you do not have insurance that cation takes effect. And in some circum- covers patent infringement, it may be stances, you may even have intervening worthwhile to look into its availability. rights, i.e., your right to continue with your product or method may be superior • Team up with other defendants. to that of the patent owner’s. Trolls often sue multiple defendants at

The procedures can take 18 months to the same time. While separate cases may three years to complete, but even if the be ? led, they are often consolidated for patent is ultimately upheld, the process discovery purposes. Having your law can often result in clarity as to the scope ? rm work closely with the other defen- of the patent claims. This will not only dants’ law ? rms, or hiring one law ? rm wireless headset systems provide give you time to grow your business to represent multiple defendants, can clear communication for offshore without the cost and disruption associ- substantially reduce your legal fees. service vessel crews ated with litigation, but it will also give you an opportunity to pin down the troll • Compel the troll to identify its in-

B. Dealing with Valid contentions can help streamline the case make a huge difference in both normal and extraordinary

Claims sure on the troll by constraining its abil-

If a candid assessment of the troll’s ity to change its contentions or, more

Call or visit www.davidclark.com 800-298-6235 for more information claim leads to the conclusion that the importantly, by exposing a possible lack about David Clark Wireless systems for workboats.

patent claim has some merit—or if a of a credible infringement theory. challenge to the Patent Of? ce proves

method that is accused of infringing a

Infringement Claims patent can often be modi? ed to avoid in-

Patent lawyers can conduct “freedom fringement. While this will not absolve to operate” (“FTO”) searches. An FTO your company for past infringement, de- pending on the length of time remaining search compares your product or pro- cess to patents located through a search before the patent expires and the amount of potentially infringing activity that of the U.S. Patent Of? ce ? les, in which patents are categorized by subject mat- already took place, cutting off infringe- ment by discontinuing the supposedly ter into classes and subclasses. If there infringing activity may lead the troll to are no patent claims that appear to cover your product or process, then you may reevaluate the value of the case. be able to develop some level of comfort that you are free to proceed without in-

Patent litigation often involves “bet fringing a patent. Similarly, if it appears the farm” issues, as damages for past that a potentially con? icting patent is infringement can be crippling and the invalid, then it may be possible to es- threat of being prevented from selling tablish that fact before proceeding with the proposed business. Conversely, if the your product daunting. With so much to lose, defendants often take a “no holds FTO reveals a problem, your company barred” approach, spending whatever it can forego the activity or design around the patent.

takes to win, but such an approach may not be feasible. Following are a few

Conclusion cost-saving strategies that must gener- ally be considered: Patent trolls are an unavoidable busi- ness hazard, but with some advance • Indemni? cation. If you are sued based precautions and a nimble response, the on a product or component that is made damage can often be minimized. As with by someone else, then the party that many problems, advance preparation provided the product to you may have can often be the key to success.