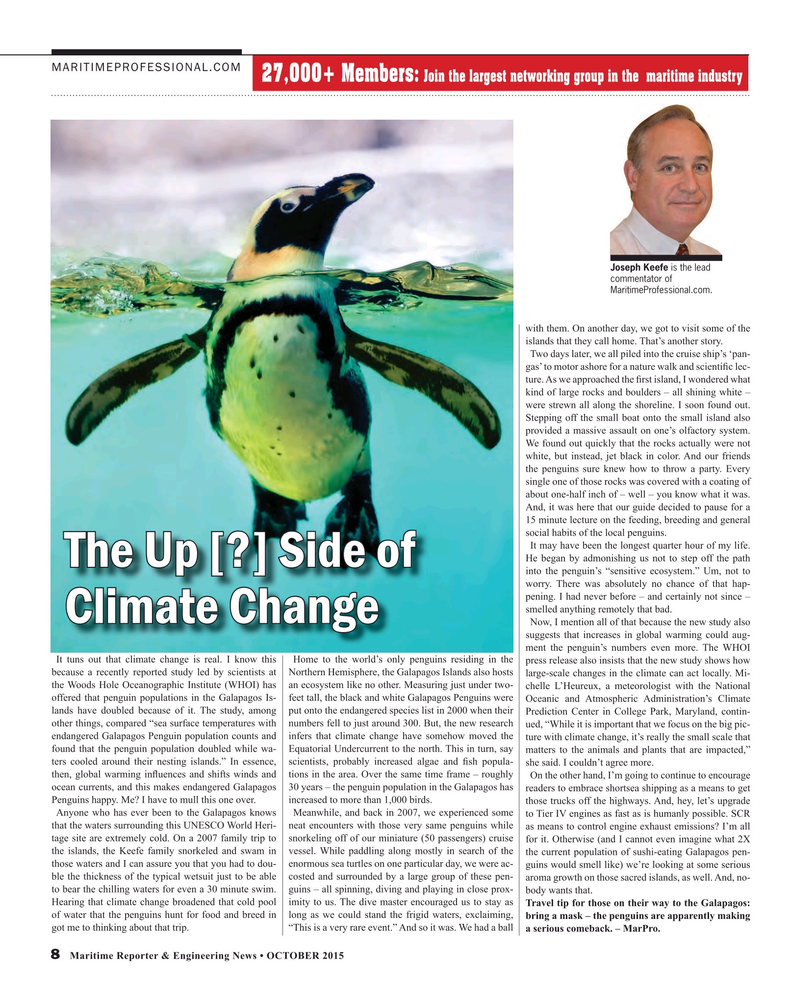 Joseph Keefe is the lead commentator of

with them. On another day, we got to visit some of the islands that they call home. That’s another story.

Two days later, we all piled into the cruise ship’s ‘pan- gas’ to motor ashore for a nature walk and scienti? c lec- ture. As we approached the ? rst island, I wondered what kind of large rocks and boulders – all shining white – were strewn all along the shoreline. I soon found out.

Stepping off the small boat onto the small island also provided a massive assault on one’s olfactory system.

We found out quickly that the rocks actually were not white, but instead, jet black in color. And our friends the penguins sure knew how to throw a party. Every single one of those rocks was covered with a coating of about one-half inch of – well – you know what it was.

And, it was here that our guide decided to pause for a 15 minute lecture on the feeding, breeding and general social habits of the local penguins.

It may have been the longest quarter hour of my life.

He began by admonishing us not to step off the path

The Up [?] Side of into the penguin’s “sensitive ecosystem.” Um, not to worry. There was absolutely no chance of that hap- pening. I had never before – and certainly not since – smelled anything remotely that bad.

Now, I mention all of that because the new study also suggests that increases in global warming could aug- ment the penguin’s numbers even more. The WHOI

It tuns out that climate change is real. I know this Home to the world’s only penguins residing in the press release also insists that the new study shows how because a recently reported study led by scientists at Northern Hemisphere, the Galapagos Islands also hosts large-scale changes in the climate can act locally. Mi- the Woods Hole Oceanographic Institute (WHOI) has an ecosystem like no other. Measuring just under two- chelle L’Heureux, a meteorologist with the National offered that penguin populations in the Galapagos Is- feet tall, the black and white Galapagos Penguins were Oceanic and Atmospheric Administration’s Climate lands have doubled because of it. The study, among put onto the endangered species list in 2000 when their Prediction Center in College Park, Maryland, contin- other things, compared “sea surface temperatures with numbers fell to just around 300. But, the new research ued, “While it is important that we focus on the big pic- endangered Galapagos Penguin population counts and infers that climate change have somehow moved the ture with climate change, it’s really the small scale that found that the penguin population doubled while wa- Equatorial Undercurrent to the north. This in turn, say matters to the animals and plants that are impacted,” ters cooled around their nesting islands.” In essence, scientists, probably increased algae and ? sh popula- she said. I couldn’t agree more.

then, global warming in? uences and shifts winds and tions in the area. Over the same time frame – roughly

On the other hand, I’m going to continue to encourage ocean currents, and this makes endangered Galapagos 30 years – the penguin population in the Galapagos has readers to embrace shortsea shipping as a means to get

Penguins happy. Me? I have to mull this one over. increased to more than 1,000 birds.

those trucks off the highways. And, hey, let’s upgrade

Anyone who has ever been to the Galapagos knows Meanwhile, and back in 2007, we experienced some to Tier IV engines as fast as is humanly possible. SCR that the waters surrounding this UNESCO World Heri- neat encounters with those very same penguins while as means to control engine exhaust emissions? I’m all tage site are extremely cold. On a 2007 family trip to snorkeling off of our miniature (50 passengers) cruise for it. Otherwise (and I cannot even imagine what 2X the islands, the Keefe family snorkeled and swam in vessel. While paddling along mostly in search of the the current population of sushi-eating Galapagos pen- those waters and I can assure you that you had to dou- enormous sea turtles on one particular day, we were ac- guins would smell like) we’re looking at some serious ble the thickness of the typical wetsuit just to be able costed and surrounded by a large group of these pen- aroma growth on those sacred islands, as well. And, no- to bear the chilling waters for even a 30 minute swim. guins – all spinning, diving and playing in close prox- body wants that.

Hearing that climate change broadened that cold pool imity to us. The dive master encouraged us to stay as Travel tip for those on their way to the Galapagos: of water that the penguins hunt for food and breed in long as we could stand the frigid waters, exclaiming, bring a mask – the penguins are apparently making got me to thinking about that trip. “This is a very rare event.” And so it was. We had a ball a serious comeback. – MarPro.