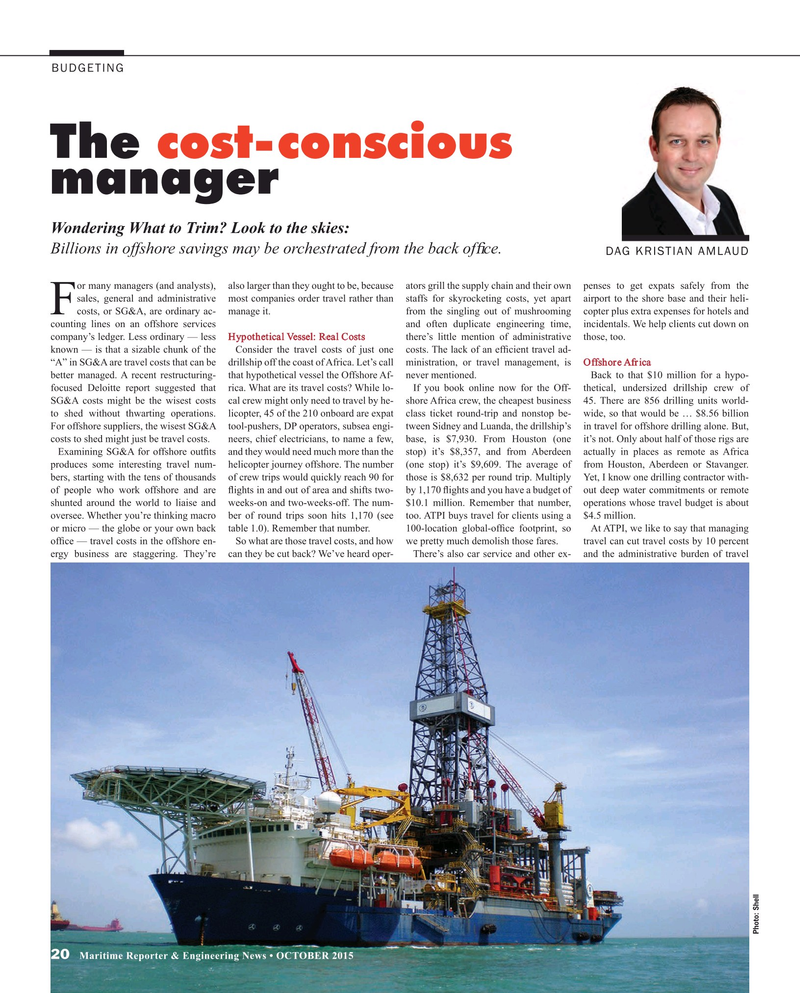 Wondering What to Trim? Look to the skies:

Billions in offshore savings may be orchestrated from the back of? ce.

DAG KRISTIAN AMLAUD or many managers (and analysts), also larger than they ought to be, because ators grill the supply chain and their own penses to get expats safely from the sales, general and administrative most companies order travel rather than staffs for skyrocketing costs, yet apart airport to the shore base and their heli-

Fcosts, or SG&A, are ordinary ac- manage it. from the singling out of mushrooming copter plus extra expenses for hotels and counting lines on an offshore services and often duplicate engineering time, incidentals. We help clients cut down on company’s ledger. Less ordinary — less Hypothetical Vessel: Real Costs there’s little mention of administrative those, too.

known — is that a sizable chunk of the Consider the travel costs of just one costs. The lack of an ef? cient travel ad- “A” in SG&A are travel costs that can be drillship off the coast of Africa. Let’s call ministration, or travel management, is Offshore Africa better managed. A recent restructuring- that hypothetical vessel the Offshore Af- never mentioned. Back to that $10 million for a hypo- focused Deloitte report suggested that rica. What are its travel costs? While lo- If you book online now for the Off- thetical, undersized drillship crew of

SG&A costs might be the wisest costs cal crew might only need to travel by he- shore Africa crew, the cheapest business 45. There are 856 drilling units world- to shed without thwarting operations. licopter, 45 of the 210 onboard are expat class ticket round-trip and nonstop be- wide, so that would be … $8.56 billion

For offshore suppliers, the wisest SG&A tool-pushers, DP operators, subsea engi- tween Sidney and Luanda, the drillship’s in travel for offshore drilling alone. But, costs to shed might just be travel costs. neers, chief electricians, to name a few, base, is $7,930. From Houston (one it’s not. Only about half of those rigs are

Examining SG&A for offshore out? ts and they would need much more than the stop) it’s $8,357, and from Aberdeen actually in places as remote as Africa produces some interesting travel num- helicopter journey offshore. The number (one stop) it’s $9,609. The average of from Houston, Aberdeen or Stavanger. bers, starting with the tens of thousands of crew trips would quickly reach 90 for those is $8,632 per round trip. Multiply Yet, I know one drilling contractor with- of people who work offshore and are ? ights in and out of area and shifts two- by 1,170 ? ights and you have a budget of out deep water commitments or remote shunted around the world to liaise and weeks-on and two-weeks-off. The num- $10.1 million. Remember that number, operations whose travel budget is about oversee. Whether you’re thinking macro ber of round trips soon hits 1,170 (see too. ATPI buys travel for clients using a $4.5 million. or micro — the globe or your own back table 1.0). Remember that number. 100-location global-of? ce footprint, so At ATPI, we like to say that managing of? ce — travel costs in the offshore en- So what are those travel costs, and how we pretty much demolish those fares. travel can cut travel costs by 10 percent ergy business are staggering. They’re can they be cut back? We’ve heard oper- There’s also car service and other ex- and the administrative burden of travel