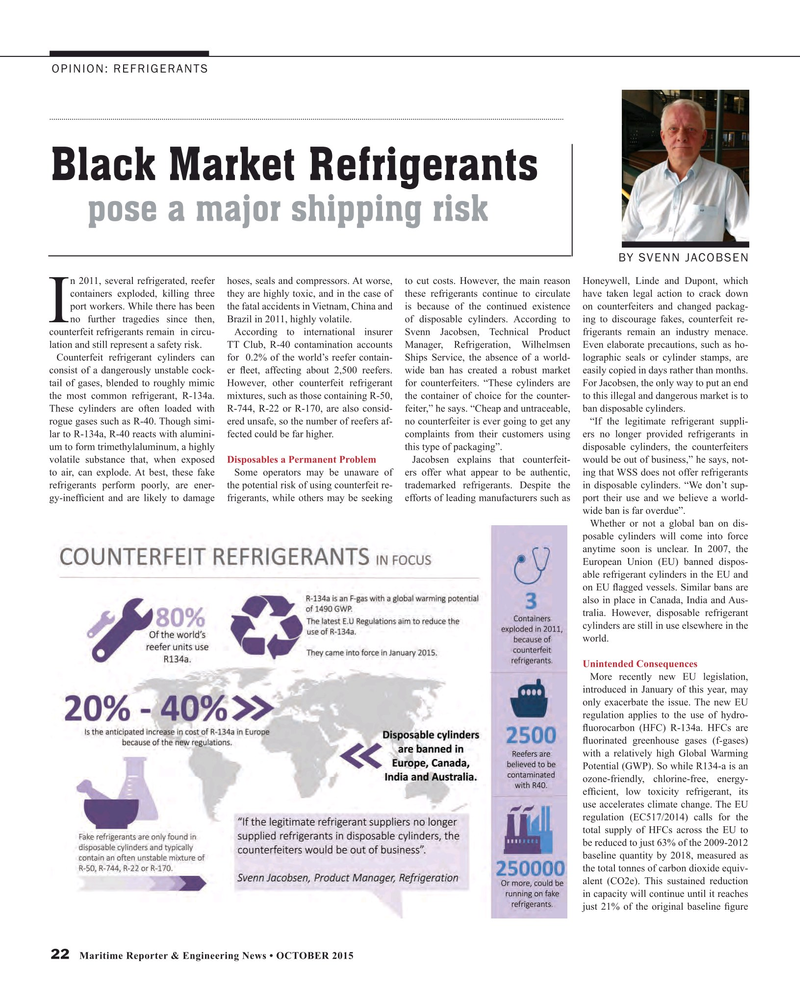 BY SVENN JACOBSEN n 2011, several refrigerated, reefer hoses, seals and compressors. At worse, to cut costs. However, the main reason Honeywell, Linde and Dupont, which containers exploded, killing three they are highly toxic, and in the case of these refrigerants continue to circulate have taken legal action to crack down port workers. While there has been the fatal accidents in Vietnam, China and is because of the continued existence on counterfeiters and changed packag-

Counterfeit refrigerant cylinders can for 0.2% of the world’s reefer contain- Ships Service, the absence of a world- lographic seals or cylinder stamps, are consist of a dangerously unstable cock- er ? eet, affecting about 2,500 reefers. wide ban has created a robust market easily copied in days rather than months. tail of gases, blended to roughly mimic However, other counterfeit refrigerant for counterfeiters. “These cylinders are For Jacobsen, the only way to put an end the most common refrigerant, R-134a. mixtures, such as those containing R-50, the container of choice for the counter- to this illegal and dangerous market is to

These cylinders are often loaded with R-744, R-22 or R-170, are also consid- feiter,” he says. “Cheap and untraceable, ban disposable cylinders. rogue gases such as R-40. Though simi- ered unsafe, so the number of reefers af- no counterfeiter is ever going to get any “If the legitimate refrigerant suppli- lar to R-134a, R-40 reacts with alumini- fected could be far higher. complaints from their customers using ers no longer provided refrigerants in um to form trimethylaluminum, a highly this type of packaging”. disposable cylinders, the counterfeiters volatile substance that, when exposed Disposables a Permanent Problem Jacobsen explains that counterfeit- would be out of business,” he says, not- to air, can explode. At best, these fake Some operators may be unaware of ers offer what appear to be authentic, ing that WSS does not offer refrigerants refrigerants perform poorly, are ener- the potential risk of using counterfeit re- trademarked refrigerants. Despite the in disposable cylinders. “We don’t sup- gy-inef? cient and are likely to damage frigerants, while others may be seeking efforts of leading manufacturers such as port their use and we believe a world- wide ban is far overdue”.

Whether or not a global ban on dis- posable cylinders will come into force anytime soon is unclear. In 2007, the

More recently new EU legislation, introduced in January of this year, may only exacerbate the issue. The new EU regulation applies to the use of hydro- ? uorocarbon (HFC) R-134a. HFCs are ? uorinated greenhouse gases (f-gases) with a relatively high Global Warming

Potential (GWP). So while R134-a is an ozone-friendly, chlorine-free, energy- ef? cient, low toxicity refrigerant, its use accelerates climate change. The EU regulation (EC517/2014) calls for the total supply of HFCs across the EU to be reduced to just 63% of the 2009-2012 baseline quantity by 2018, measured as the total tonnes of carbon dioxide equiv- alent (CO2e). This sustained reduction in capacity will continue until it reaches just 21% of the original baseline ? gure 22 Maritime Reporter & Engineering News • OCTOBER 2015