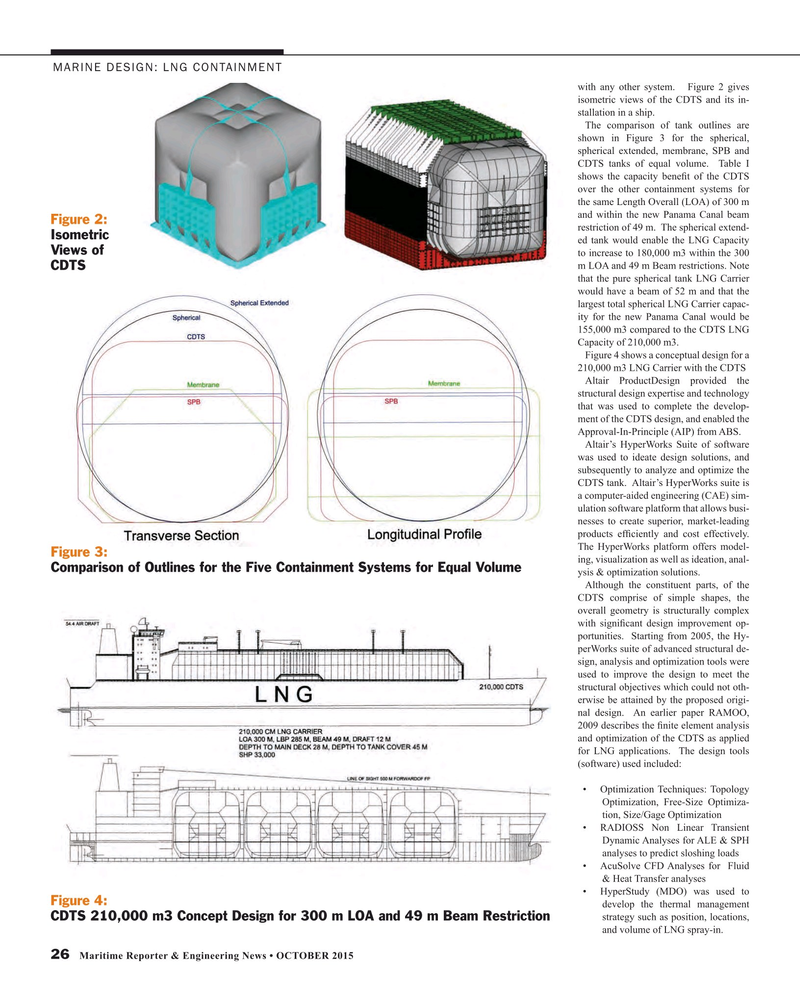 MARINE DESIGN: LNG CONTAINMENT with any other system. Figure 2 gives isometric views of the CDTS and its in- stallation in a ship.

The comparison of tank outlines are shown in Figure 3 for the spherical, spherical extended, membrane, SPB and

CDTS tanks of equal volume. Table I shows the capacity bene? t of the CDTS over the other containment systems for the same Length Overall (LOA) of 300 m and within the new Panama Canal beam

CDTS that the pure spherical tank LNG Carrier would have a beam of 52 m and that the largest total spherical LNG Carrier capac- ity for the new Panama Canal would be 155,000 m3 compared to the CDTS LNG

Figure 4 shows a conceptual design for a 210,000 m3 LNG Carrier with the CDTS

Altair ProductDesign provided the structural design expertise and technology that was used to complete the develop- ment of the CDTS design, and enabled the

Altair’s HyperWorks Suite of software was used to ideate design solutions, and subsequently to analyze and optimize the

Although the constituent parts, of the

CDTS comprise of simple shapes, the overall geometry is structurally complex with signi? cant design improvement op- portunities. Starting from 2005, the Hy- perWorks suite of advanced structural de- sign, analysis and optimization tools were used to improve the design to meet the structural objectives which could not oth- erwise be attained by the proposed origi- nal design. An earlier paper RAMOO, 2009 describes the ? nite element analysis and optimization of the CDTS as applied for LNG applications. The design tools (software) used included: • Optimization Techniques: Topology

Figure 4: develop the thermal management strategy such as position, locations,