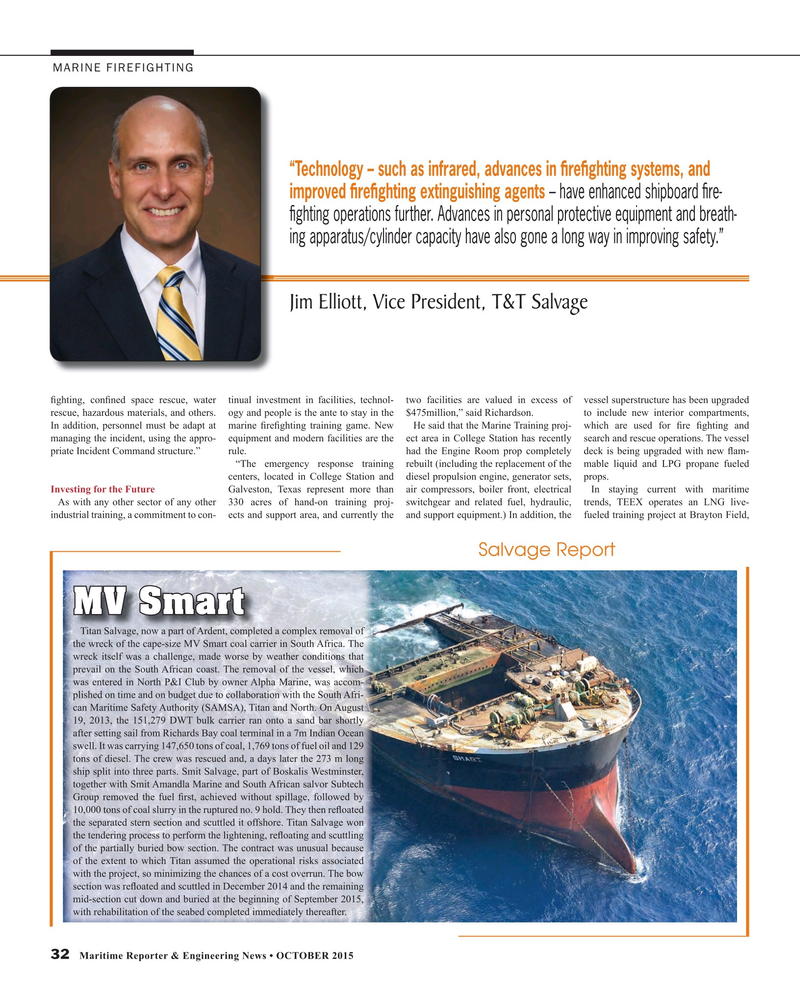 MARINE FIREFIGHTING “Technology – such as infrared, advances in ? re? ghting systems, and improved ? re? ghting extinguishing agents – have enhanced shipboard ? re- ? ghting operations further. Advances in personal protective equipment and breath- ing apparatus/cylinder capacity have also gone a long way in improving safety.”

Jim Elliott, Vice President, T&T Salvage ? ghting, con? ned space rescue, water tinual investment in facilities, technol- two facilities are valued in excess of vessel superstructure has been upgraded rescue, hazardous materials, and others. ogy and people is the ante to stay in the $475million,” said Richardson. to include new interior compartments,

In addition, personnel must be adapt at marine ? re? ghting training game. New He said that the Marine Training proj- which are used for ? re ? ghting and managing the incident, using the appro- equipment and modern facilities are the ect area in College Station has recently search and rescue operations. The vessel priate Incident Command structure.” rule. had the Engine Room prop completely deck is being upgraded with new ? am- “The emergency response training rebuilt (including the replacement of the mable liquid and LPG propane fueled centers, located in College Station and diesel propulsion engine, generator sets, props.

As with any other sector of any other 330 acres of hand-on training proj- switchgear and related fuel, hydraulic, trends, TEEX operates an LNG live- industrial training, a commitment to con- ects and support area, and currently the and support equipment.) In addition, the fueled training project at Brayton Field,

Titan Salvage, now a part of Ardent, completed a complex removal of the wreck of the cape-size MV Smart coal carrier in South Africa. The wreck itself was a challenge, made worse by weather conditions that prevail on the South African coast. The removal of the vessel, which was entered in North P&I Club by owner Alpha Marine, was accom- plished on time and on budget due to collaboration with the South Afri- can Maritime Safety Authority (SAMSA), Titan and North. On August 19, 2013, the 151,279 DWT bulk carrier ran onto a sand bar shortly after setting sail from Richards Bay coal terminal in a 7m Indian Ocean swell. It was carrying 147,650 tons of coal, 1,769 tons of fuel oil and 129 tons of diesel. The crew was rescued and, a days later the 273 m long ship split into three parts. Smit Salvage, part of Boskalis Westminster, together with Smit Amandla Marine and South African salvor Subtech

Group removed the fuel ? rst, achieved without spillage, followed by 10,000 tons of coal slurry in the ruptured no. 9 hold. They then re? oated the separated stern section and scuttled it offshore. Titan Salvage won the tendering process to perform the lightening, re? oating and scuttling of the partially buried bow section. The contract was unusual because of the extent to which Titan assumed the operational risks associated with the project, so minimizing the chances of a cost overrun. The bow section was re? oated and scuttled in December 2014 and the remaining mid-section cut down and buried at the beginning of September 2015, with rehabilitation of the seabed completed immediately thereafter.