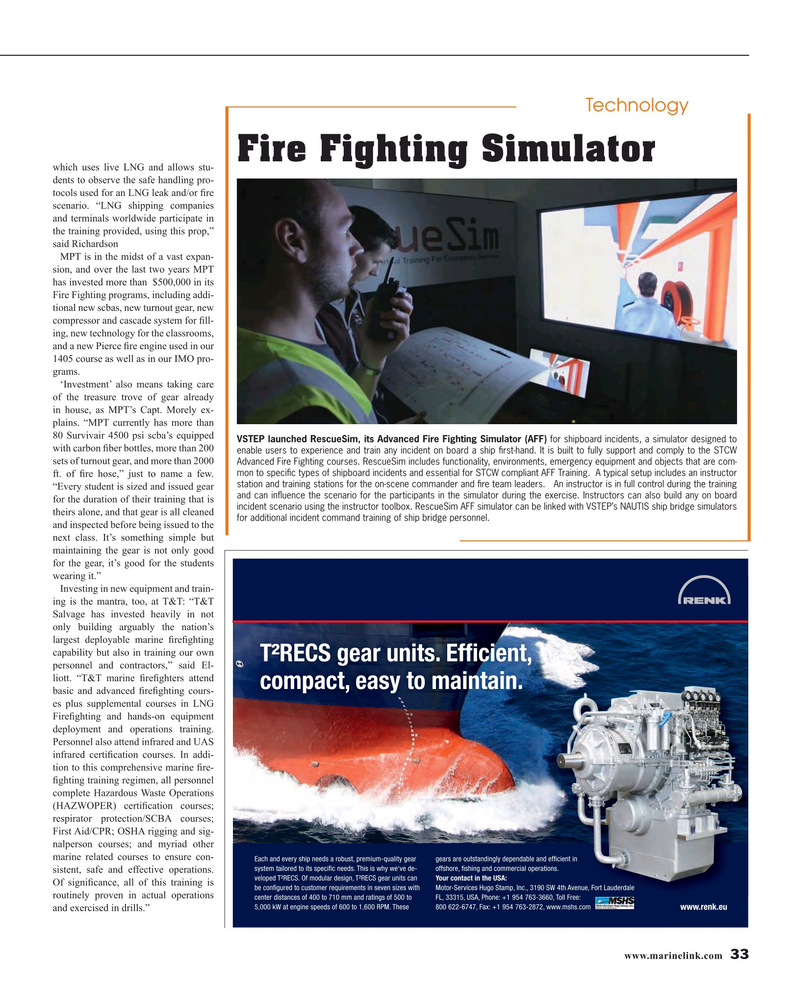 MPT is in the midst of a vast expan- sion, and over the last two years MPT has invested more than $500,000 in its

VSTEP launched RescueSim, its Advanced Fire Fighting Simulator (AFF) for shipboard incidents, a simulator designed to with carbon ? ber bottles, more than 200 enable users to experience and train any incident on board a ship ? rst-hand. It is built to fully support and comply to the STCW sets of turnout gear, and more than 2000

Advanced Fire Fighting courses. RescueSim includes functionality, environments, emergency equipment and objects that are com- mon to speci? c types of shipboard incidents and essential for STCW compliant AFF Training. A typical setup includes an instructor ft. of ? re hose,” just to name a few. station and training stations for the on-scene commander and ? re team leaders. An instructor is in full control during the training “Every student is sized and issued gear and can in? uence the scenario for the participants in the simulator during the exercise. Instructors can also build any on board for the duration of their training that is incident scenario using the instructor toolbox. RescueSim AFF simulator can be linked with VSTEP’s NAUTIS ship bridge simulators theirs alone, and that gear is all cleaned for additional incident command training of ship bridge personnel. and inspected before being issued to the next class. It’s something simple but maintaining the gear is not only good for the gear, it’s good for the students wearing it.”

Investing in new equipment and train- ing is the mantra, too, at T&T: “T&T

Salvage has invested heavily in not only building arguably the nation’s largest deployable marine ? re? ghting capability but also in training our own

basic and advanced ? re? ghting cours- es plus supplemental courses in LNG

Each and every ship needs a robust, premium-quality gear gears are outstandingly dependable and ef? cient in system tailored to its speci? c needs. This is why we‘ve de- offshore, ? shing and commercial operations.

sistent, safe and effective operations. veloped T²RECS. Of modular design, T²RECS gear units can Your contact in the USA: