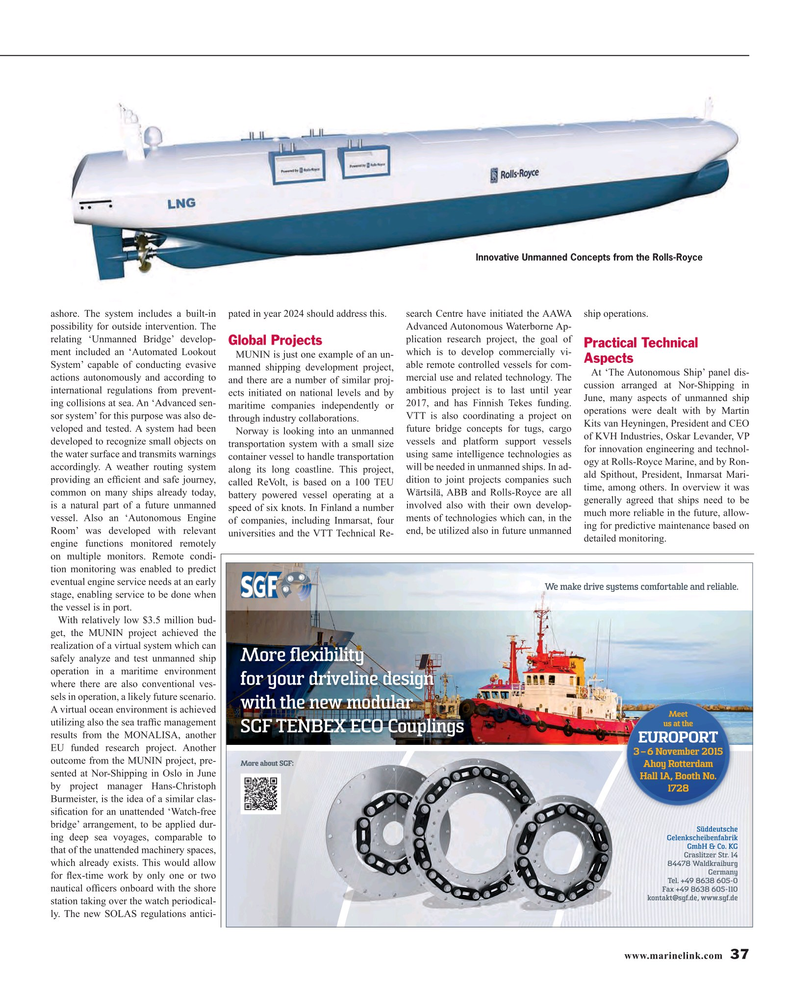 Innovative Unmanned Concepts from the Rolls-Royce ashore. The system includes a built-in pated in year 2024 should address this. search Centre have initiated the AAWA ship operations. possibility for outside intervention. The Advanced Autonomous Waterborne Ap- relating ‘Unmanned Bridge’ develop- plication research project, the goal of

MUNIN is just one example of an un-

At ‘The Autonomous Ship’ panel dis- mercial use and related technology. The actions autonomously and according to and there are a number of similar proj- international regulations from prevent- ects initiated on national levels and by ambitious project is to last until year cussion arranged at Nor-Shipping in ing collisions at sea. An ‘Advanced sen- maritime companies independently or 2017, and has Finnish Tekes funding. June, many aspects of unmanned ship

VTT is also coordinating a project on operations were dealt with by Martin sor system’ for this purpose was also de- through industry collaborations. veloped and tested. A system had been

Norway is looking into an unmanned future bridge concepts for tugs, cargo Kits van Heyningen, President and CEO developed to recognize small objects on transportation system with a small size vessels and platform support vessels of KVH Industries, Oskar Levander, VP the water surface and transmits warnings container vessel to handle transportation using same intelligence technologies as for innovation engineering and technol- ogy at Rolls-Royce Marine, and by Ron- accordingly. A weather routing system along its long coastline. This project, will be needed in unmanned ships. In ad- providing an ef? cient and safe journey, called ReVolt, is based on a 100 TEU dition to joint projects companies such ald Spithout, President, Inmarsat Mari- common on many ships already today, battery powered vessel operating at a Wärtsilä, ABB and Rolls-Royce are all time, among others. In overview it was generally agreed that ships need to be is a natural part of a future unmanned speed of six knots. In Finland a number involved also with their own develop- much more reliable in the future, allow- vessel. Also an ‘Autonomous Engine of companies, including Inmarsat, four ments of technologies which can, in the ing for predictive maintenance based on end, be utilized also in future unmanned

stage, enabling service to be done when the vessel is in port.

With relatively low $3.5 million bud- get, the MUNIN project achieved the realization of a virtual system which can

More flexibility safely analyze and test unmanned ship operation in a maritime environment for your driveline design where there are also conventional ves- sels in operation, a likely future scenario. with the new modular

A virtual ocean environment is achieved

Meet utilizing also the sea traf? c management us at the

SGF TENBEX ECO Couplings results from the MONALISA, another

Ahoy Rotterdam sented at Nor-Shipping in Oslo in June

Hall 1A, Booth No. by project manager Hans-Christoph 1728

Burmeister, is the idea of a similar clas- si? cation for an unattended ‘Watch-free bridge’ arrangement, to be applied dur-

GmbH & Co. KG that of the unattended machinery spaces,

Graslitzer Str. 14 which already exists. This would allow 84478 Waldkraiburg

Germany for ? ex-time work by only one or two