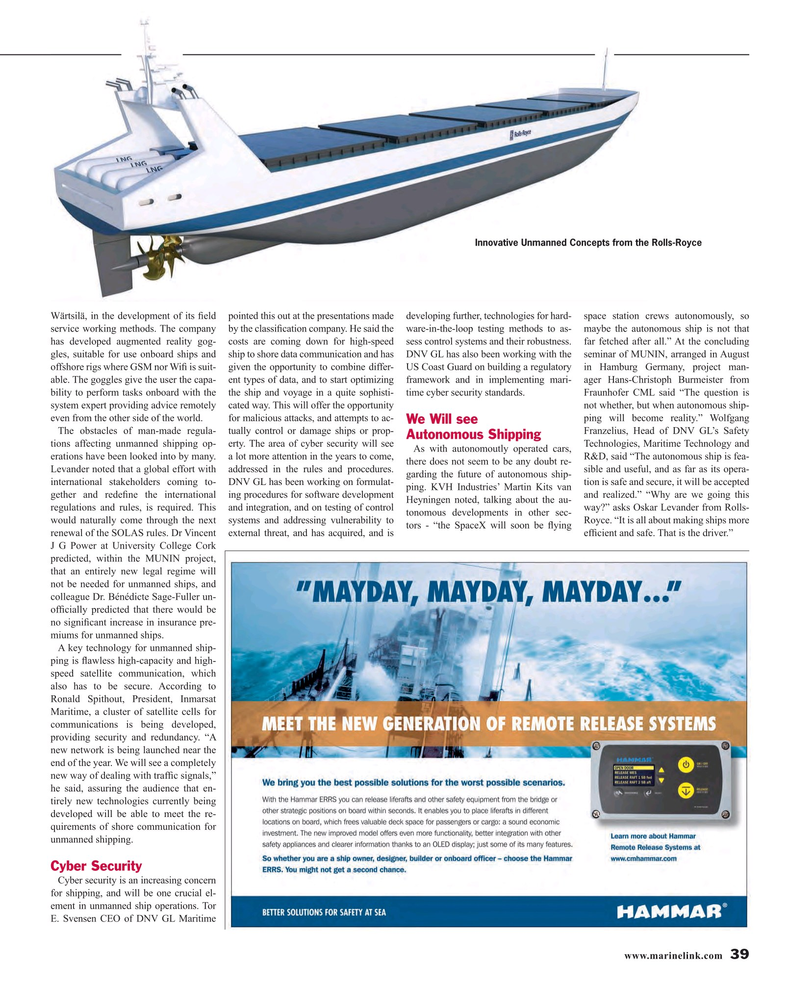 Innovative Unmanned Concepts from the Rolls-Royce

Wärtsilä, in the development of its ? eld pointed this out at the presentations made developing further, technologies for hard- space station crews autonomously, so service working methods. The company by the classi? cation company. He said the ware-in-the-loop testing methods to as- maybe the autonomous ship is not that has developed augmented reality gog- costs are coming down for high-speed sess control systems and their robustness. far fetched after all.” At the concluding gles, suitable for use onboard ships and ship to shore data communication and has DNV GL has also been working with the seminar of MUNIN, arranged in August offshore rigs where GSM nor Wi? is suit- given the opportunity to combine differ- US Coast Guard on building a regulatory in Hamburg Germany, project man- able. The goggles give the user the capa- ent types of data, and to start optimizing framework and in implementing mari- ager Hans-Christoph Burmeister from bility to perform tasks onboard with the the ship and voyage in a quite sophisti- time cyber security standards. Fraunhofer CML said “The question is system expert providing advice remotely cated way. This will offer the opportunity not whether, but when autonomous ship- even from the other side of the world. for malicious attacks, and attempts to ac- ping will become reality.” Wolfgang

Autonomous Shipping tions affecting unmanned shipping op- erty. The area of cyber security will see As with autonomoutly operated cars, Technologies, Maritime Technology and erations have been looked into by many. a lot more attention in the years to come, R&D, said “The autonomous ship is fea- there does not seem to be any doubt re-

Levander noted that a global effort with addressed in the rules and procedures. garding the future of autonomous ship- sible and useful, and as far as its opera- international stakeholders coming to- DNV GL has been working on formulat- ping. KVH Industries’ Martin Kits van tion is safe and secure, it will be accepted gether and rede? ne the international ing procedures for software development and realized.” “Why are we going this

Heyningen noted, talking about the au- regulations and rules, is required. This and integration, and on testing of control way?” asks Oskar Levander from Rolls- tonomous developments in other sec- would naturally come through the next systems and addressing vulnerability to tors - “the SpaceX will soon be ? ying

Royce. “It is all about making ships more renewal of the SOLAS rules. Dr Vincent external threat, and has acquired, and is ef? cient and safe. That is the driver.”

J G Power at University College Cork predicted, within the MUNIN project, that an entirely new legal regime will not be needed for unmanned ships, and colleague Dr. Bénédicte Sage-Fuller un- of? cially predicted that there would be no signi? cant increase in insurance pre- miums for unmanned ships.

A key technology for unmanned ship- ping is ? awless high-capacity and high- speed satellite communication, which also has to be secure. According to

Maritime, a cluster of satellite cells for communications is being developed, providing security and redundancy. “A new network is being launched near the end of the year. We will see a completely new way of dealing with traf? c signals,” he said, assuring the audience that en- tirely new technologies currently being developed will be able to meet the re- quirements of shore communication for unmanned shipping.

Cyber security is an increasing concern for shipping, and will be one crucial el- ement in unmanned ship operations. Tor