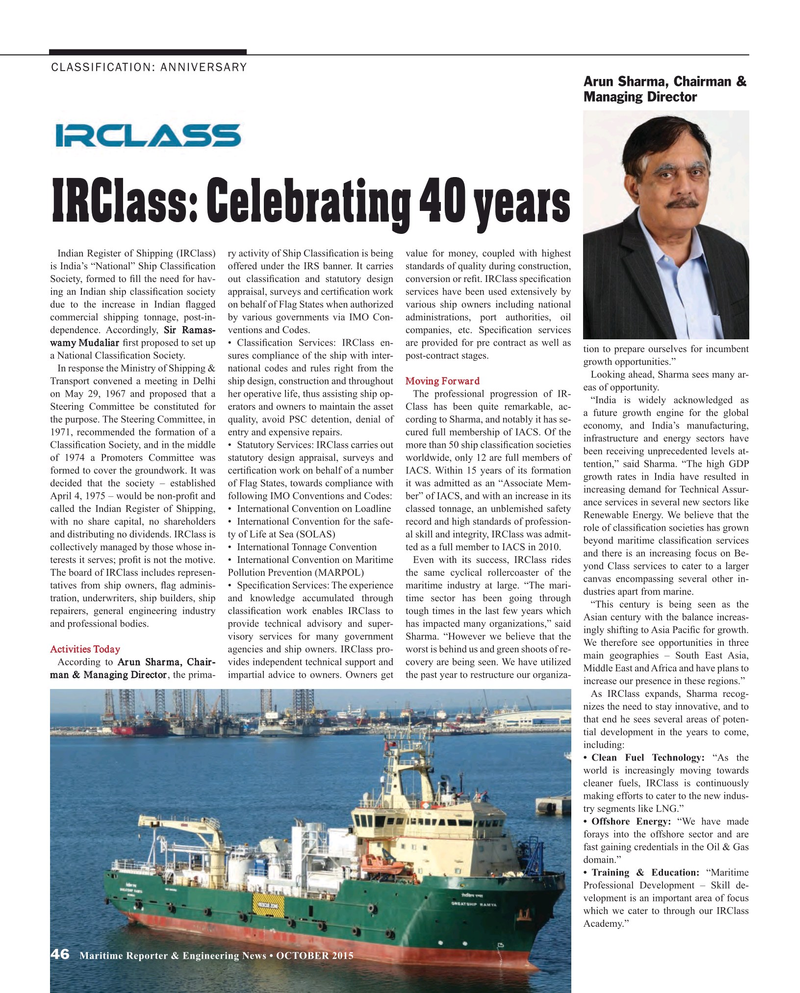 Looking ahead, Sharma sees many ar-

Transport convened a meeting in Delhi ship design, construction and throughout Moving Forward eas of opportunity.

on May 29, 1967 and proposed that a her operative life, thus assisting ship op- The professional progression of IR- “India is widely acknowledged as

Steering Committee be constituted for erators and owners to maintain the asset Class has been quite remarkable, ac- a future growth engine for the global the purpose. The Steering Committee, in quality, avoid PSC detention, denial of cording to Sharma, and notably it has se- economy, and India’s manufacturing, 1971, recommended the formation of a entry and expensive repairs. cured full membership of IACS. Of the infrastructure and energy sectors have

Classi? cation Society, and in the middle • Statutory Services: IRClass carries out more than 50 ship classi? cation societies been receiving unprecedented levels at- of 1974 a Promoters Committee was statutory design appraisal, surveys and worldwide, only 12 are full members of tention,” said Sharma. “The high GDP formed to cover the groundwork. It was certi? cation work on behalf of a number IACS. Within 15 years of its formation growth rates in India have resulted in decided that the society – established of Flag States, towards compliance with it was admitted as an “Associate Mem- increasing demand for Technical Assur-

April 4, 1975 – would be non-pro? t and following IMO Conventions and Codes: ber” of IACS, and with an increase in its ance services in several new sectors like called the Indian Register of Shipping, • International Convention on Loadline classed tonnage, an unblemished safety

Renewable Energy. We believe that the with no share capital, no shareholders • International Convention for the safe- record and high standards of profession- role of classi? cation societies has grown and distributing no dividends. IRClass is ty of Life at Sea (SOLAS) al skill and integrity, IRClass was admit- beyond maritime classi? cation services collectively managed by those whose in- • International Tonnage Convention ted as a full member to IACS in 2010. terests it serves; pro? t is not the motive. • International Convention on Maritime Even with its success, IRClass rides and there is an increasing focus on Be-

The board of IRClass includes represen- Pollution Prevention (MARPOL) the same cyclical rollercoaster of the yond Class services to cater to a larger canvas encompassing several other in- tatives from ship owners, ? ag adminis- • Speci? cation Services: The experience maritime industry at large. “The mari- tration, underwriters, ship builders, ship and knowledge accumulated through time sector has been going through dustries apart from marine.

“This century is being seen as the repairers, general engineering industry classi? cation work enables IRClass to tough times in the last few years which

Asian century with the balance increas- and professional bodies. provide technical advisory and super- has impacted many organizations,” said ingly shifting to Asia Paci? c for growth. visory services for many government Sharma. “However we believe that the

We therefore see opportunities in three

Activities Today agencies and ship owners. IRClass pro- worst is behind us and green shoots of re- main geographies – South East Asia,

According to Arun Sharma, Chair- vides independent technical support and covery are being seen. We have utilized

Middle East and Africa and have plans to man & Managing Director, the prima- impartial advice to owners. Owners get the past year to restructure our organiza- increase our presence in these regions.”

As IRClass expands, Sharma recog- nizes the need to stay innovative, and to that end he sees several areas of poten- tial development in the years to come, including: • Clean Fuel Technology: “As the world is increasingly moving towards cleaner fuels, IRClass is continuously making efforts to cater to the new indus- try segments like LNG.” • Offshore Energy: “We have made forays into the offshore sector and are fast gaining credentials in the Oil & Gas domain.” • Training & Education: “Maritime