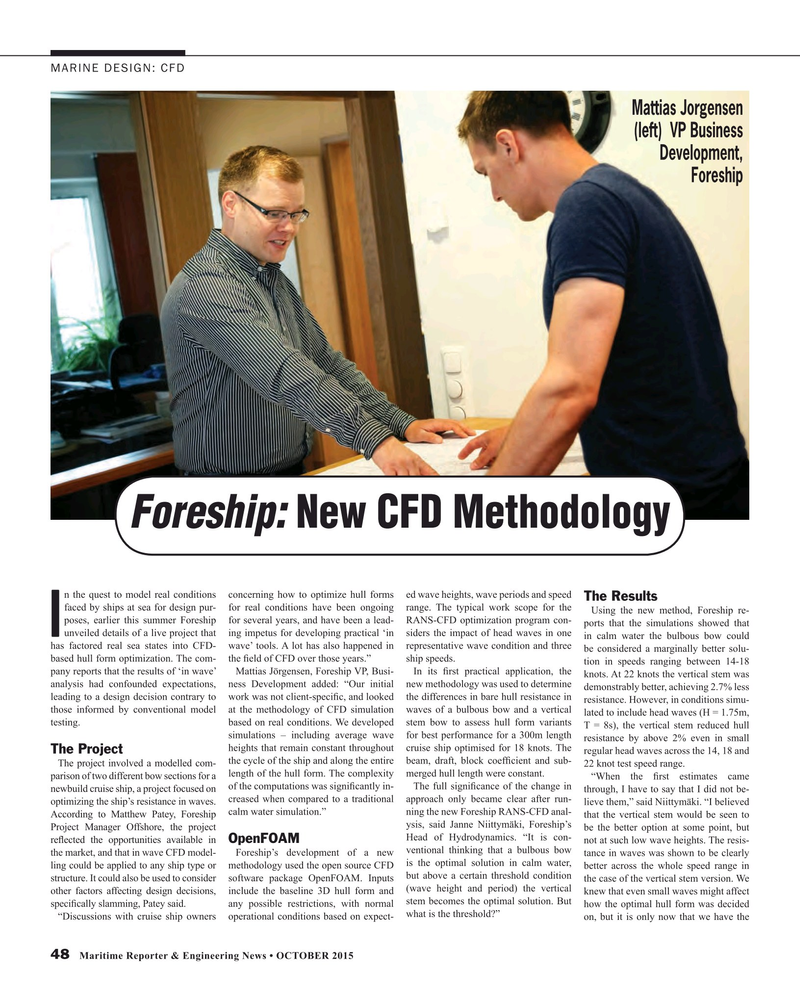 The Results faced by ships at sea for design pur- for real conditions have been ongoing range. The typical work scope for the

Using the new method, Foreship re- poses, earlier this summer Foreship for several years, and have been a lead- RANS-CFD optimization program con- ports that the simulations showed that

Iunveiled details of a live project that ing impetus for developing practical ‘in siders the impact of head waves in one in calm water the bulbous bow could has factored real sea states into CFD- wave’ tools. A lot has also happened in representative wave condition and three be considered a marginally better solu- based hull form optimization. The com- the ? eld of CFD over those years.” ship speeds. tion in speeds ranging between 14-18 pany reports that the results of ‘in wave’ Mattias Jörgensen, Foreship VP, Busi-

In its ? rst practical application, the knots. At 22 knots the vertical stem was analysis had confounded expectations, ness Development added: “Our initial new methodology was used to determine demonstrably better, achieving 2.7% less leading to a design decision contrary to work was not client-speci? c, and looked the differences in bare hull resistance in resistance. However, in conditions simu- those informed by conventional model at the methodology of CFD simulation waves of a bulbous bow and a vertical lated to include head waves (H = 1.75m, testing. based on real conditions. We developed stem bow to assess hull form variants T = 8s), the vertical stem reduced hull simulations – including average wave for best performance for a 300m length resistance by above 2% even in small heights that remain constant throughout cruise ship optimised for 18 knots. The regular head waves across the 14, 18 and

The Project the cycle of the ship and along the entire beam, draft, block coef? cient and sub-

parison of two different bow sections for a “When the ? rst estimates came of the computations was signi? cantly in- newbuild cruise ship, a project focused on The full signi? cance of the change in through, I have to say that I did not be- optimizing the ship’s resistance in waves. creased when compared to a traditional approach only became clear after run- lieve them,” said Niittymäki. “I believed

Project Manager Offshore, the project ysis, said Janne Niittymäki, Foreship’s be the better option at some point, but

Head of Hydrodynamics. “It is con- re? ected the opportunities available in not at such low wave heights. The resis-

OpenFOAM the market, and that in wave CFD model- Foreship’s development of a new ventional thinking that a bulbous bow tance in waves was shown to be clearly ling could be applied to any ship type or methodology used the open source CFD is the optimal solution in calm water, better across the whole speed range in structure. It could also be used to consider software package OpenFOAM. Inputs but above a certain threshold condition the case of the vertical stem version. We other factors affecting design decisions, include the baseline 3D hull form and (wave height and period) the vertical knew that even small waves might affect speci? cally slamming, Patey said. any possible restrictions, with normal stem becomes the optimal solution. But how the optimal hull form was decided what is the threshold?” “Discussions with cruise ship owners operational conditions based on expect- on, but it is only now that we have the 48 Maritime Reporter & Engineering News • OCTOBER 2015