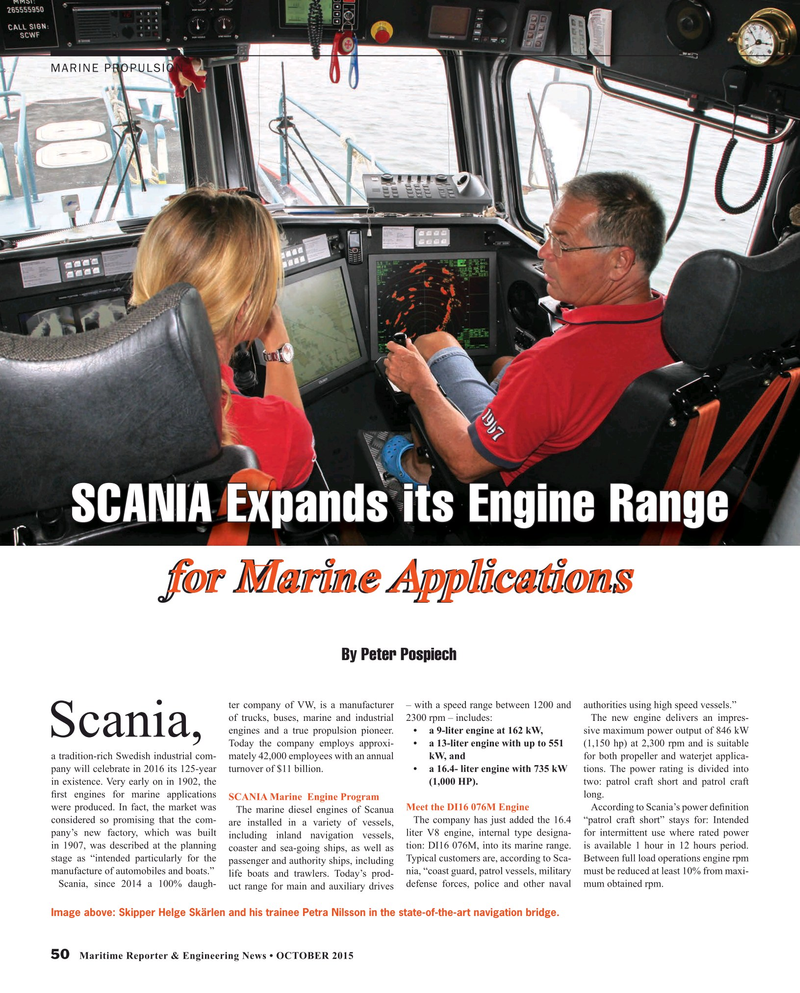 By Peter Pospiech ter company of VW, is a manufacturer – with a speed range between 1200 and authorities using high speed vessels.” of trucks, buses, marine and industrial 2300 rpm – includes: The new engine delivers an impres- engines and a true propulsion pioneer. • a 9-liter engine at 162 kW, sive maximum power output of 846 kW

Today the company employs approxi- • a 13-liter engine with up to 551 (1,150 hp) at 2,300 rpm and is suitable a tradition-rich Swedish industrial com- mately 42,000 employees with an annual kW, and for both propeller and waterjet applica- pany will celebrate in 2016 its 125-year turnover of $11 billion. • a 16.4- liter engine with 735 kW tions. The power rating is divided into in existence. Very early on in 1902, the (1,000 HP). two: patrol craft short and patrol craft ? rst engines for marine applications SCANIA Marine Engine Program long.

were produced. In fact, the market was The marine diesel engines of Scanua Meet the DI16 076M Engine According to Scania’s power de? nition considered so promising that the com- The company has just added the 16.4 “patrol craft short” stays for: Intended are installed in a variety of vessels, pany’s new factory, which was built including inland navigation vessels, liter V8 engine, internal type designa- for intermittent use where rated power in 1907, was described at the planning coaster and sea-going ships, as well as tion: DI16 076M, into its marine range. is available 1 hour in 12 hours period. stage as “intended particularly for the passenger and authority ships, including Typical customers are, according to Sca- Between full load operations engine rpm manufacture of automobiles and boats.” nia, “coast guard, patrol vessels, military must be reduced at least 10% from maxi- life boats and trawlers. Today’s prod-

Scania, since 2014 a 100% daugh- uct range for main and auxiliary drives defense forces, police and other naval mum obtained rpm.

Image above: Skipper Helge Skärlen and his trainee Petra Nilsson in the state-of-the-art navigation bridge.