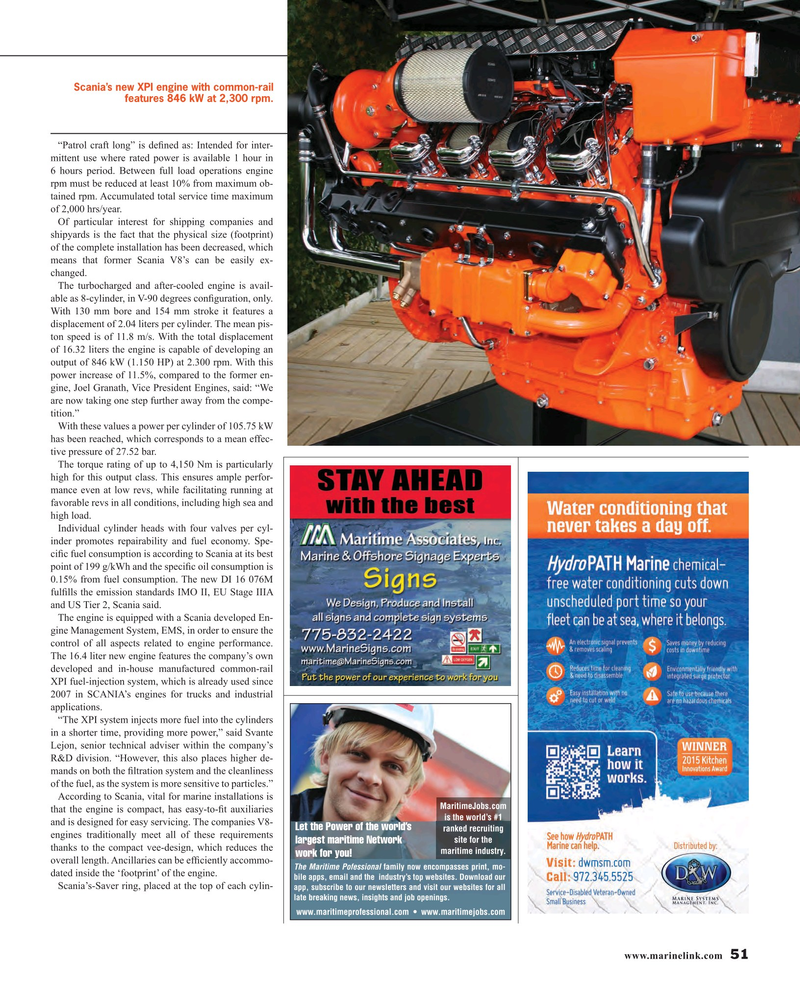 Of particular interest for shipping companies and shipyards is the fact that the physical size (footprint) of the complete installation has been decreased, which means that former Scania V8’s can be easily ex- changed.

The turbocharged and after-cooled engine is avail- able as 8-cylinder, in V-90 degrees con? guration, only.

With these values a power per cylinder of 105.75 kW has been reached, which corresponds to a mean effec- tive pressure of 27.52 bar.

The torque rating of up to 4,150 Nm is particularly high for this output class. This ensures ample perfor- mance even at low revs, while facilitating running at favorable revs in all conditions, including high sea and high load.

The engine is equipped with a Scania developed En- gine Management System, EMS, in order to ensure the control of all aspects related to engine performance.

The 16.4 liter new engine features the company’s own developed and in-house manufactured common-rail

XPI fuel-injection system, which is already used since 2007 in SCANIA’s engines for trucks and industrial applications.

R&D division. “However, this also places higher de- mands on both the ? ltration system and the cleanliness of the fuel, as the system is more sensitive to particles.”

According to Scania, vital for marine installations is

MaritimeJobs.com that the engine is compact, has easy-to-? t auxiliaries is the world’s #1 and is designed for easy servicing. The companies V8-

Let the Power of the world’s ranked recruiting engines traditionally meet all of these requirements site for the largest maritime Network thanks to the compact vee-design, which reduces the maritime industry.

The Maritime Pofessional family now encompasses print, mo- dated inside the ‘footprint’ of the engine.

bile apps, email and the industry’s top websites. Download our

Scania’s-Saver ring, placed at the top of each cylin- app, subscribe to our newsletters and visit our websites for all late breaking news, insights and job openings.