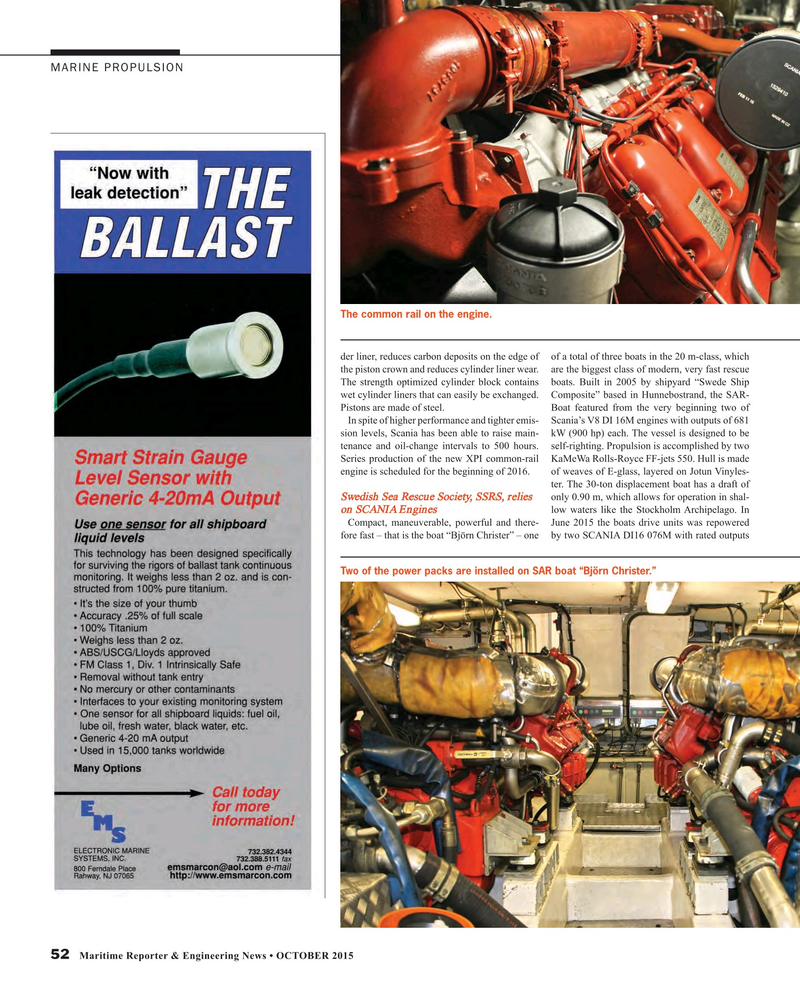 The common rail on the engine.

der liner, reduces carbon deposits on the edge of of a total of three boats in the 20 m-class, which the piston crown and reduces cylinder liner wear. are the biggest class of modern, very fast rescue

The strength optimized cylinder block contains boats. Built in 2005 by shipyard “Swede Ship wet cylinder liners that can easily be exchanged. Composite” based in Hunnebostrand, the SAR-

Pistons are made of steel. Boat featured from the very beginning two of

In spite of higher performance and tighter emis- Scania’s V8 DI 16M engines with outputs of 681 sion levels, Scania has been able to raise main- kW (900 hp) each. The vessel is designed to be tenance and oil-change intervals to 500 hours. self-righting. Propulsion is accomplished by two

Series production of the new XPI common-rail KaMeWa Rolls-Royce FF-jets 550. Hull is made engine is scheduled for the beginning of 2016. of weaves of E-glass, layered on Jotun Vinyles- ter. The 30-ton displacement boat has a draft of

Swedish Sea Rescue Society, SSRS, relies only 0.90 m, which allows for operation in shal- on SCANIA Engines low waters like the Stockholm Archipelago. In

Compact, maneuverable, powerful and there- June 2015 the boats drive units was repowered fore fast – that is the boat “Björn Christer” – one by two SCANIA DI16 076M with rated outputs