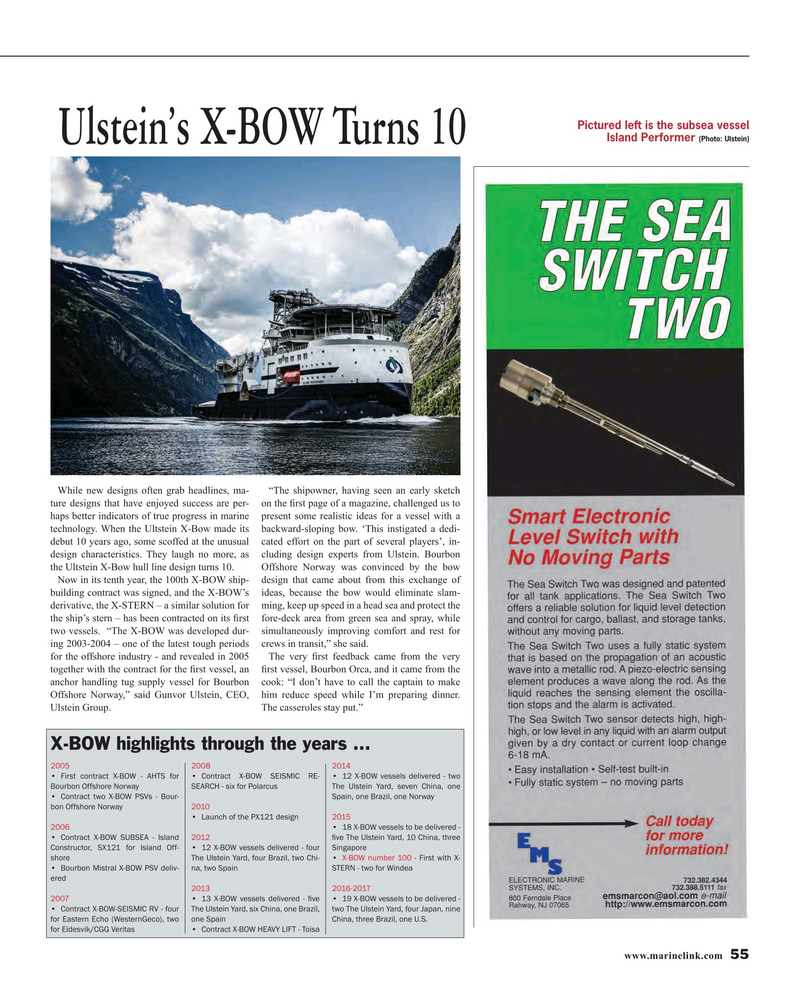 While new designs often grab headlines, ma- “The shipowner, having seen an early sketch ture designs that have enjoyed success are per- on the ? rst page of a magazine, challenged us to haps better indicators of true progress in marine present some realistic ideas for a vessel with a technology. When the Ultstein X-Bow made its backward-sloping bow. ‘This instigated a dedi- debut 10 years ago, some scoffed at the unusual cated effort on the part of several players’, in- design characteristics. They laugh no more, as cluding design experts from Ulstein. Bourbon the Ultstein X-Bow hull line design turns 10. Offshore Norway was convinced by the bow

Now in its tenth year, the 100th X-BOW ship- design that came about from this exchange of building contract was signed, and the X-BOW’s ideas, because the bow would eliminate slam- derivative, the X-STERN – a similar solution for ming, keep up speed in a head sea and protect the the ship’s stern – has been contracted on its ? rst fore-deck area from green sea and spray, while two vessels. “The X-BOW was developed dur- simultaneously improving comfort and rest for ing 2003-2004 – one of the latest tough periods crews in transit,” she said. for the offshore industry - and revealed in 2005 The very ? rst feedback came from the very together with the contract for the ? rst vessel, an ? rst vessel, Bourbon Orca, and it came from the anchor handling tug supply vessel for Bourbon cook: “I don’t have to call the captain to make

X-BOW highlights through the years ...