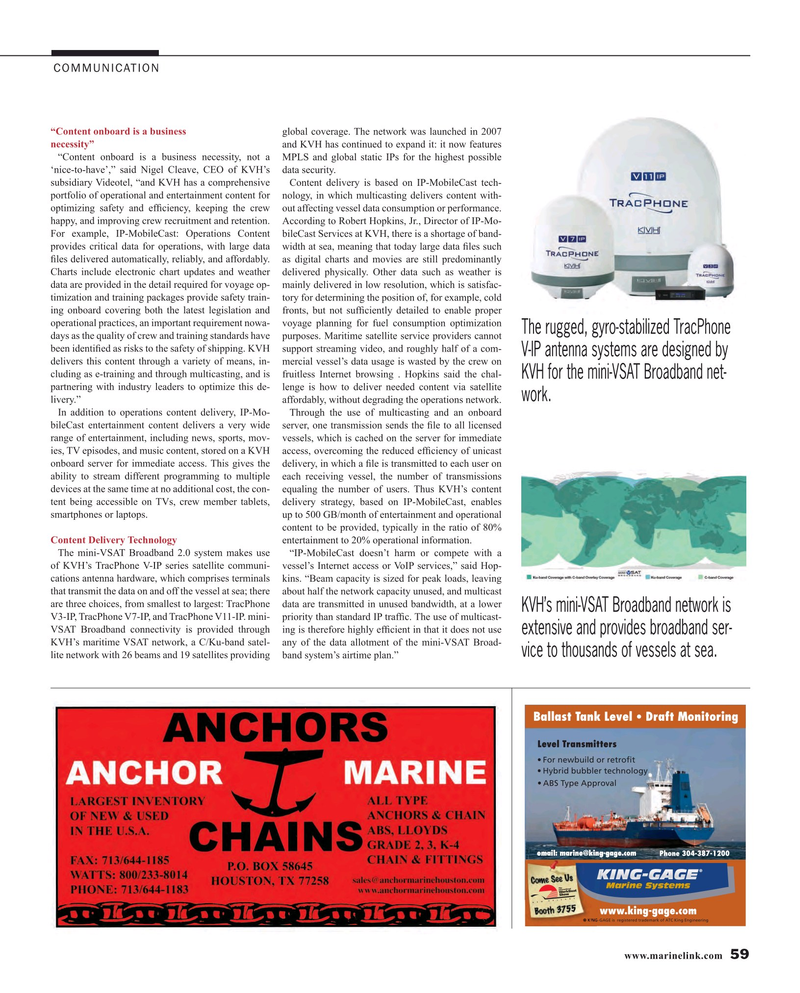 subsidiary Videotel, “and KVH has a comprehensive Content delivery is based on IP-MobileCast tech- portfolio of operational and entertainment content for nology, in which multicasting delivers content with- optimizing safety and ef? ciency, keeping the crew out affecting vessel data consumption or performance. happy, and improving crew recruitment and retention. According to Robert Hopkins, Jr., Director of IP-Mo-

For example, IP-MobileCast: Operations Content bileCast Services at KVH, there is a shortage of band- provides critical data for operations, with large data width at sea, meaning that today large data ? les such ? les delivered automatically, reliably, and affordably. as digital charts and movies are still predominantly

Charts include electronic chart updates and weather delivered physically. Other data such as weather is data are provided in the detail required for voyage op- mainly delivered in low resolution, which is satisfac- timization and training packages provide safety train- tory for determining the position of, for example, cold ing onboard covering both the latest legislation and fronts, but not suf? ciently detailed to enable proper operational practices, an important requirement nowa- voyage planning for fuel consumption optimization

The rugged, gyro-stabilized TracPhone days as the quality of crew and training standards have purposes. Maritime satellite service providers cannot been identi? ed as risks to the safety of shipping. KVH support streaming video, and roughly half of a com-

V-IP antenna systems are designed by delivers this content through a variety of means, in- mercial vessel’s data usage is wasted by the crew on cluding as e-training and through multicasting, and is fruitless Internet browsing . Hopkins said the chal-

KVH for the mini-VSAT Broadband net- partnering with industry leaders to optimize this de- lenge is how to deliver needed content via satellite work.

In addition to operations content delivery, IP-Mo- Through the use of multicasting and an onboard bileCast entertainment content delivers a very wide server, one transmission sends the ? le to all licensed range of entertainment, including news, sports, mov- vessels, which is cached on the server for immediate ies, TV episodes, and music content, stored on a KVH access, overcoming the reduced ef? ciency of unicast onboard server for immediate access. This gives the delivery, in which a ? le is transmitted to each user on ability to stream different programming to multiple each receiving vessel, the number of transmissions devices at the same time at no additional cost, the con- equaling the number of users. Thus KVH’s content tent being accessible on TVs, crew member tablets, delivery strategy, based on IP-MobileCast, enables smartphones or laptops. up to 500 GB/month of entertainment and operational content to be provided, typically in the ratio of 80%

The mini-VSAT Broadband 2.0 system makes use “IP-MobileCast doesn’t harm or compete with a of KVH’s TracPhone V-IP series satellite communi- vessel’s Internet access or VoIP services,” said Hop- cations antenna hardware, which comprises terminals kins. “Beam capacity is sized for peak loads, leaving that transmit the data on and off the vessel at sea; there about half the network capacity unused, and multicast are three choices, from smallest to largest: TracPhone data are transmitted in unused bandwidth, at a lower

VSAT Broadband connectivity is provided through ing is therefore highly ef? cient in that it does not use extensive and provides broadband ser-

KVH’s maritime VSAT network, a C/Ku-band satel- any of the data allotment of the mini-VSAT Broad- vice to thousands of vessels at sea.