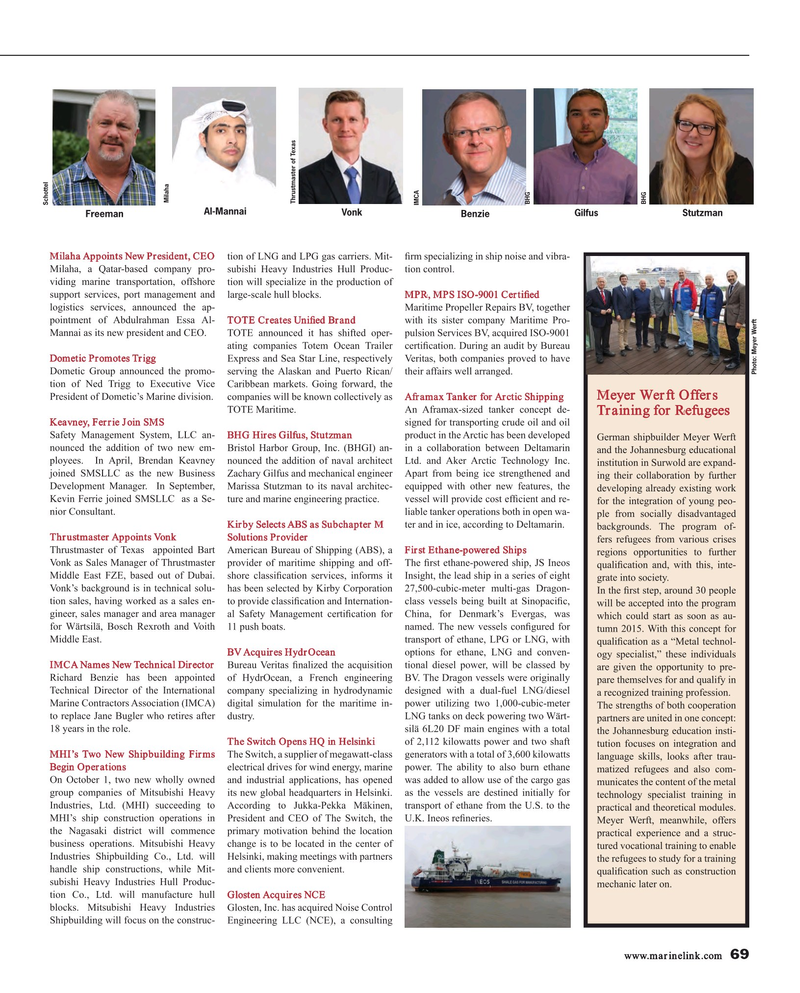 President of Dometic’s Marine division. companies will be known collectively as Aframax Tanker for Arctic Shipping

Safety Management System, LLC an- BHG Hires Gilfus, Stutzman product in the Arctic has been developed

German shipbuilder Meyer Werft nounced the addition of two new em- Bristol Harbor Group, Inc. (BHGI) an- in a collaboration between Deltamarin and the Johannesburg educational ployees. In April, Brendan Keavney nounced the addition of naval architect Ltd. and Aker Arctic Technology Inc. institution in Surwold are expand- joined SMSLLC as the new Business Zachary Gilfus and mechanical engineer Apart from being ice strengthened and ing their collaboration by further

Development Manager. In September, Marissa Stutzman to its naval architec- equipped with other new features, the developing already existing work

Kevin Ferrie joined SMSLLC as a Se- ture and marine engineering practice. vessel will provide cost ef? cient and re- for the integration of young peo- nior Consultant. liable tanker operations both in open wa- ple from socially disadvantaged

Kirby Selects ABS as Subchapter M ter and in ice, according to Deltamarin.

backgrounds. The program of-

Vonk as Sales Manager of Thrustmaster provider of maritime shipping and off- The ? rst ethane-powered ship, JS Ineos quali? cation and, with this, inte-

Middle East FZE, based out of Dubai. shore classi? cation services, informs it Insight, the lead ship in a series of eight grate into society.

Vonk’s background is in technical solu- has been selected by Kirby Corporation 27,500-cubic-meter multi-gas Dragon-

In the ? rst step, around 30 people tion sales, having worked as a sales en- to provide classi? cation and Internation- class vessels being built at Sinopaci? c, will be accepted into the program gineer, sales manager and area manager al Safety Management certi? cation for China, for Denmark’s Evergas, was which could start as soon as au- for Wärtsilä, Bosch Rexroth and Voith 11 push boats. named. The new vessels con? gured for tumn 2015. With this concept for

Middle East. transport of ethane, LPG or LNG, with quali? cation as a “Metal technol-

IMCA Names New Technical Director Bureau Veritas ? nalized the acquisition tional diesel power, will be classed by are given the opportunity to pre-

Richard Benzie has been appointed of HydrOcean, a French engineering BV. The Dragon vessels were originally pare themselves for and qualify in

Technical Director of the International company specializing in hydrodynamic designed with a dual-fuel LNG/diesel a recognized training profession.

The strengths of both cooperation to replace Jane Bugler who retires after dustry. LNG tanks on deck powering two Wärt- partners are united in one concept: 18 years in the role. silä 6L20 DF main engines with a total the Johannesburg education insti-

The Switch Opens HQ in Helsinki of 2,112 kilowatts power and two shaft tution focuses on integration and

MHI’s Two New Shipbuilding Firms The Switch, a supplier of megawatt-class generators with a total of 3,600 kilowatts language skills, looks after trau-

On October 1, two new wholly owned and industrial applications, has opened was added to allow use of the cargo gas municates the content of the metal group companies of Mitsubishi Heavy its new global headquarters in Helsinki. as the vessels are destined initially for technology specialist training in

Industries, Ltd. (MHI) succeeding to According to Jukka-Pekka Mäkinen, transport of ethane from the U.S. to the practical and theoretical modules.

MHI’s ship construction operations in President and CEO of The Switch, the U.K. Ineos re? neries.

Meyer Werft, meanwhile, offers the Nagasaki district will commence primary motivation behind the location practical experience and a struc- business operations. Mitsubishi Heavy change is to be located in the center of tured vocational training to enable

Industries Shipbuilding Co., Ltd. will Helsinki, making meetings with partners the refugees to study for a training handle ship constructions, while Mit- and clients more convenient.

Shipbuilding will focus on the construc- Engineering LLC (NCE), a consulting www.marinelink.com 69