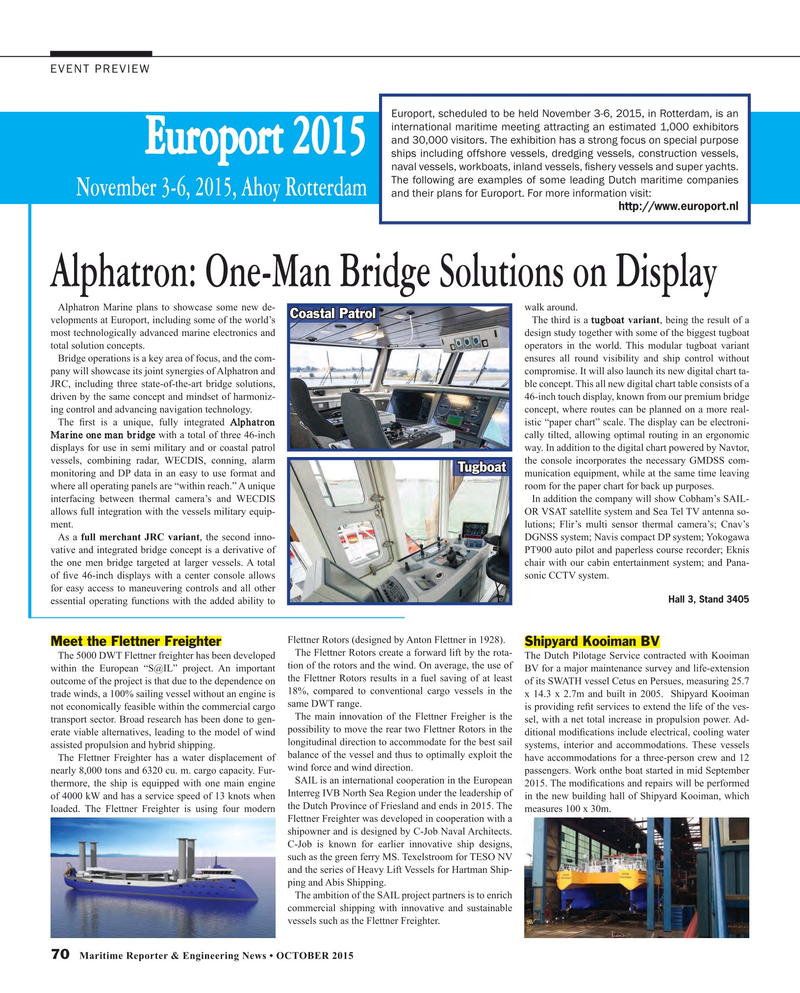 Europort, scheduled to be held November 3-6, 2015, in Rotterdam, is an international maritime meeting attracting an estimated 1,000 exhibitors and 30,000 visitors. The exhibition has a strong focus on special purpose

The following are examples of some leading Dutch maritime companies

November 3-6, 2015, Ahoy Rotterdam and their plans for Europort. For more information visit: http://www.europort.nl

Alphatron Marine plans to showcase some new de- walk around.

Coastal Patrol velopments at Europort, including some of the world’s The third is a tugboat variant, being the result of a most technologically advanced marine electronics and design study together with some of the biggest tugboat total solution concepts. operators in the world. This modular tugboat variant

Bridge operations is a key area of focus, and the com- ensures all round visibility and ship control without pany will showcase its joint synergies of Alphatron and compromise. It will also launch its new digital chart ta-

JRC, including three state-of-the-art bridge solutions, ble concept. This all new digital chart table consists of a driven by the same concept and mindset of harmoniz- 46-inch touch display, known from our premium bridge ing control and advancing navigation technology. concept, where routes can be planned on a more real-

The ? rst is a unique, fully integrated Alphatron istic “paper chart” scale. The display can be electroni-

Marine one man bridge with a total of three 46-inch cally tilted, allowing optimal routing in an ergonomic displays for use in semi military and or coastal patrol way. In addition to the digital chart powered by Navtor, vessels, combining radar, WECDIS, conning, alarm the console incorporates the necessary GMDSS com-

Tugboat monitoring and DP data in an easy to use format and munication equipment, while at the same time leaving where all operating panels are “within reach.” A unique room for the paper chart for back up purposes. interfacing between thermal camera’s and WECDIS In addition the company will show Cobham’s SAIL- allows full integration with the vessels military equip- OR VSAT satellite system and Sea Tel TV antenna so- ment. lutions; Flir’s multi sensor thermal camera’s; Cnav’s

As a full merchant JRC variant, the second inno- DGNSS system; Navis compact DP system; Yokogawa vative and integrated bridge concept is a derivative of PT900 auto pilot and paperless course recorder; Eknis the one men bridge targeted at larger vessels. A total chair with our cabin entertainment system; and Pana- of ? ve 46-inch displays with a center console allows sonic CCTV system. for easy access to maneuvering controls and all other

Hall 3, Stand 3405 essential operating functions with the added ability to

The Flettner Rotors create a forward lift by the rota-

The 5000 DWT Flettner freighter has been developed The Dutch Pilotage Service contracted with Kooiman within the European “S@IL” project. An important tion of the rotors and the wind. On average, the use of BV for a major maintenance survey and life-extension outcome of the project is that due to the dependence on the Flettner Rotors results in a fuel saving of at least of its SWATH vessel Cetus en Persues, measuring 25.7 trade winds, a 100% sailing vessel without an engine is 18%, compared to conventional cargo vessels in the x 14.3 x 2.7m and built in 2005. Shipyard Kooiman not economically feasible within the commercial cargo same DWT range.

is providing re? t services to extend the life of the ves- transport sector. Broad research has been done to gen- The main innovation of the Flettner Freigher is the sel, with a net total increase in propulsion power. Ad- erate viable alternatives, leading to the model of wind possibility to move the rear two Flettner Rotors in the ditional modi? cations include electrical, cooling water assisted propulsion and hybrid shipping. longitudinal direction to accommodate for the best sail systems, interior and accommodations. These vessels

The Flettner Freighter has a water displacement of balance of the vessel and thus to optimally exploit the have accommodations for a three-person crew and 12 wind force and wind direction.

nearly 8,000 tons and 6320 cu. m. cargo capacity. Fur- passengers. Work onthe boat started in mid September thermore, the ship is equipped with one main engine SAIL is an international cooperation in the European 2015. The modi? cations and repairs will be performed of 4000 kW and has a service speed of 13 knots when Interreg IVB North Sea Region under the leadership of in the new building hall of Shipyard Kooiman, which loaded. The Flettner Freighter is using four modern the Dutch Province of Friesland and ends in 2015. The measures 100 x 30m.

Flettner Freighter was developed in cooperation with a shipowner and is designed by C-Job Naval Architects.

C-Job is known for earlier innovative ship designs, such as the green ferry MS. Texelstroom for TESO NV and the series of Heavy Lift Vessels for Hartman Ship- ping and Abis Shipping.

The ambition of the SAIL project partners is to enrich commercial shipping with innovative and sustainable vessels such as the Flettner Freighter.