When Using CFD Simulations, an Analysis of Anti-Roll Tanks (ARTS)

In 2014, the behavior of anti-roll tanks was studied at MARIN by using ReFRESCO CFD simulations to fully understand the working principles.

In 2014, the behavior of anti-roll tanks (ARTs) was studied at MARIN by using ReFRESCO CFD simulations to fully understand the working principles.
The roll motion of ships operating in a seaway often limits operations. These limits could be due to the maximum acceleration, green water, capsize risk or just comfort, for example. Therefore, additional roll damping is often desired to improve the operability of ships. Several devices can be used to decrease roll motion, such as bilge keels, active stabilizer fins and U-shaped or free-surface anti-roll tanks.
At MARIN, the U-shaped ART was examined in detail. The amplitude and phase of the roll opposing moment, resulting from the water that moves transversally in the ART, strongly depends on the inside geometry of the tank. A well-designed ART facilitates a substantial reduction in roll motion at the ship’s resonance frequency and a small increase in the response at off-resonant frequencies. Certainly, the design of an ART is not straightforward, as a badly designed ART can make the roll motion even worse during operations.
Using ReFRESCO, simulations were performed to analyze and visualize the forces and moments acting on different areas of the ART.  A numerical sensitivity and validation study was performed to obtain a good trade-off between accuracy and computational costs. The results of the simulations will be used to build an ART database for optimization purposes. Additionally, if the required roll damping of the system is known at an earlier stage, ReFRESCO can be used as a simulation driven design tool.
The ReFRESCO results of the U-shaped ART have been compared with available CFD and experimental results from literature, as well as with MARIN’s own experiments, using the MARIN Anti-Roll Tank Facility. The results of the simulated and measured data concur very well (Fig.1). Interestingly, some scale effects in roll damping response have been observed, especially when the flow is restricted by obstacles in the tank (Fig.2). Further research on ARTs will be continued this year. For example, the mentioned scale effects and the free-surface ART will be studied to obtain an accurate and complete description of their design and response.

(As published in the November 2015 edition of Maritime Reporter & Engineering News - http://magazines.marinelink.com/Magazines/MaritimeReporter) 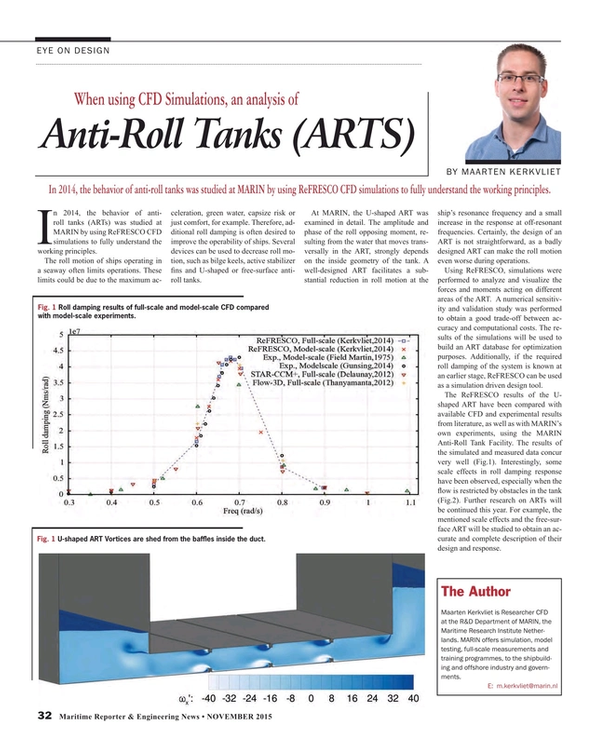 Other stories from November 2015 issue