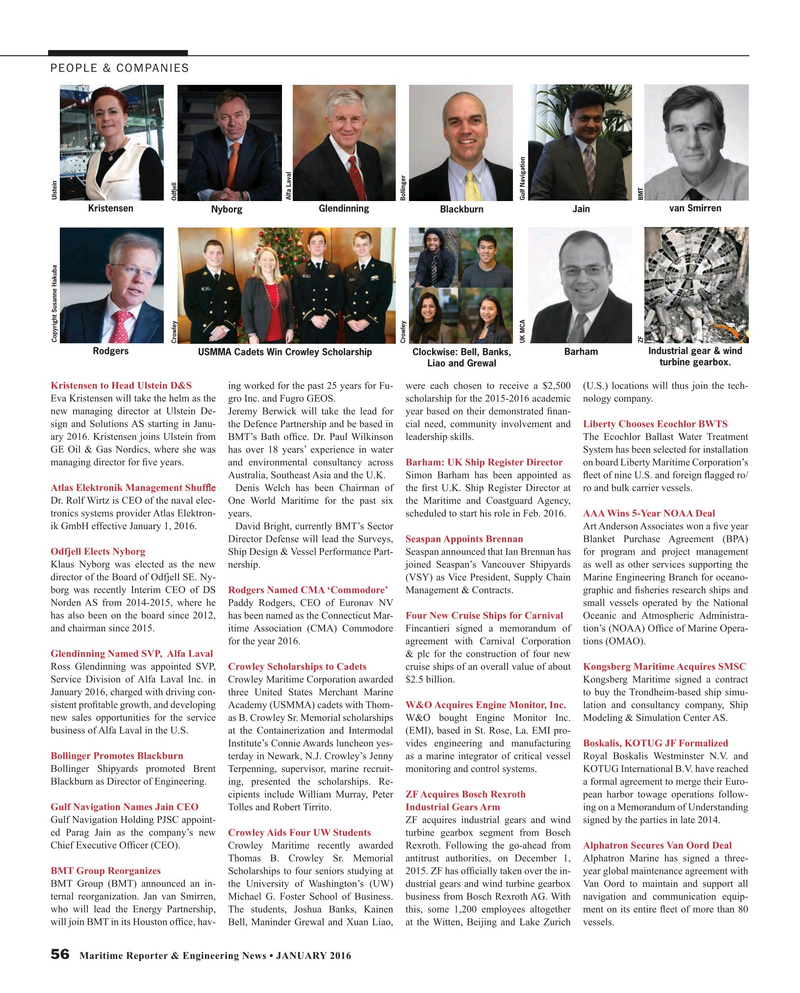 Kristensen to Head Ulstein D&S ing worked for the past 25 years for Fu- were each chosen to receive a $2,500 (U.S.) locations will thus join the tech-

Eva Kristensen will take the helm as the gro Inc. and Fugro GEOS. scholarship for the 2015-2016 academic nology company.

new managing director at Ulstein De- Jeremy Berwick will take the lead for year based on their demonstrated ? nan- sign and Solutions AS starting in Janu- the Defence Partnership and be based in cial need, community involvement and Liberty Chooses Ecochlor BWTS ary 2016. Kristensen joins Ulstein from BMT’s Bath of? ce. Dr. Paul Wilkinson leadership skills. The Ecochlor Ballast Water Treatment

GE Oil & Gas Nordics, where she was has over 18 years’ experience in water System has been selected for installation managing director for ? ve years. and environmental consultancy across Barham: UK Ship Register Director on board Liberty Maritime Corporation’s

Australia, Southeast Asia and the U.K. Simon Barham has been appointed as ? eet of nine U.S. and foreign ? agged ro/

Norden AS from 2014-2015, where he Paddy Rodgers, CEO of Euronav NV small vessels operated by the National has also been on the board since 2012, has been named as the Connecticut Mar- Four New Cruise Ships for Carnival Oceanic and Atmospheric Administra- and chairman since 2015. itime Association (CMA) Commodore Fincantieri signed a memorandum of tion’s (NOAA) Of? ce of Marine Opera- for the year 2016. agreement with Carnival Corporation tions (OMAO).

business of Alfa Laval in the U.S. at the Containerization and Intermodal (EMI), based in St. Rose, La. EMI pro-

BMT Group Reorganizes Scholarships to four seniors studying at 2015. ZF has of? cially taken over the in- year global maintenance agreement with

BMT Group (BMT) announced an in- the University of Washington’s (UW) dustrial gears and wind turbine gearbox Van Oord to maintain and support all ternal reorganization. Jan van Smirren, Michael G. Foster School of Business. business from Bosch Rexroth AG. With navigation and communication equip- who will lead the Energy Partnership, The students, Joshua Banks, Kainen this, some 1,200 employees altogether ment on its entire ? eet of more than 80 will join BMT in its Houston of? ce, hav- Bell, Maninder Grewal and Xuan Liao, at the Witten, Beijing and Lake Zurich vessels. 56 Maritime Reporter & Engineering News • JANUARY 2016