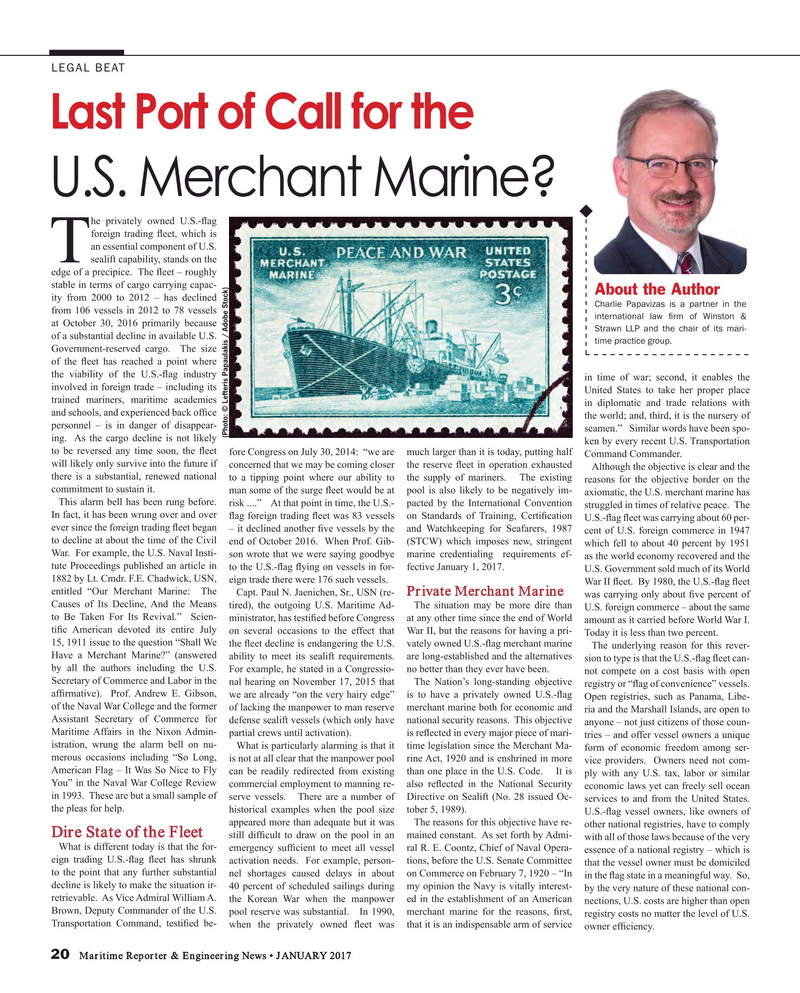 Last Port of Call for the

he privately owned U.S.-? ag foreign trading ? eet, which is an essential component of U.S.

Tsealift capability, stands on the edge of a precipice. The ? eet – roughly stable in terms of cargo carrying capac-

Charlie Papavizas is a partner in the from 106 vessels in 2012 to 78 vessels international law ? rm of Winston & at October 30, 2016 primarily because

Strawn LLP and the chair of its mari- of a substantial decline in available U.S. time practice group.

Government-reserved cargo. The size of the ? eet has reached a point where the viability of the U.S.-? ag industry in time of war; second, it enables the involved in foreign trade – including its

United States to take her proper place trained mariners, maritime academies in diplomatic and trade relations with and schools, and experienced back of? ce the world; and, third, it is the nursery of personnel – is in danger of disappear- seamen.” Similar words have been spo- (Photo: © Lefteris Papaulakis / Adobe Stock) ing. As the cargo decline is not likely ken by every recent U.S. Transportation to be reversed any time soon, the ? eet fore Congress on July 30, 2014: “we are much larger than it is today, putting half Command Commander. will likely only survive into the future if concerned that we may be coming closer the reserve ? eet in operation exhausted

Although the objective is clear and the there is a substantial, renewed national to a tipping point where our ability to the supply of mariners. The existing reasons for the objective border on the commitment to sustain it. man some of the surge ? eet would be at pool is also likely to be negatively im- axiomatic, the U.S. merchant marine has

This alarm bell has been rung before. risk ....” At that point in time, the U.S.- pacted by the International Convention struggled in times of relative peace. The

In fact, it has been wrung over and over ? ag foreign trading ? eet was 83 vessels on Standards of Training, Certi? cation U.S.-? ag ? eet was carrying about 60 per- ever since the foreign trading ? eet began – it declined another ? ve vessels by the and Watchkeeping for Seafarers, 1987 cent of U.S. foreign commerce in 1947 to decline at about the time of the Civil end of October 2016. When Prof. Gib- (STCW) which imposes new, stringent which fell to about 40 percent by 1951

War. For example, the U.S. Naval Insti- son wrote that we were saying goodbye marine credentialing requirements ef- as the world economy recovered and the tute Proceedings published an article in to the U.S.-? ag ? ying on vessels in for- fective January 1, 2017.

Private Merchant Marine was carrying only about ? ve percent of

Causes of Its Decline, And the Means tired), the outgoing U.S. Maritime Ad-

The situation may be more dire than U.S. foreign commerce – about the same to Be Taken For Its Revival.” Scien- ministrator, has testi? ed before Congress at any other time since the end of World amount as it carried before World War I. ti? c American devoted its entire July on several occasions to the effect that War II, but the reasons for having a pri-

Today it is less than two percent. 15, 1911 issue to the question “Shall We the ? eet decline is endangering the U.S. vately owned U.S.-? ag merchant marine

The underlying reason for this rever-

Have a Merchant Marine?” (answered ability to meet its sealift requirements. are long-established and the alternatives sion to type is that the U.S.-? ag ? eet can- by all the authors including the U.S. For example, he stated in a Congressio- no better than they ever have been. not compete on a cost basis with open

Secretary of Commerce and Labor in the nal hearing on November 17, 2015 that

The Nation’s long-standing objective registry or “? ag of convenience” vessels. af? rmative). Prof. Andrew E. Gibson, we are already “on the very hairy edge” is to have a privately owned U.S.-? ag Open registries, such as Panama, Libe- of the Naval War College and the former of lacking the manpower to man reserve merchant marine both for economic and ria and the Marshall Islands, are open to

Assistant Secretary of Commerce for defense sealift vessels (which only have national security reasons. This objective anyone – not just citizens of those coun-

Maritime Affairs in the Nixon Admin- partial crews until activation). is re? ected in every major piece of mari- tries – and offer vessel owners a unique istration, wrung the alarm bell on nu-

What is particularly alarming is that it time legislation since the Merchant Ma- form of economic freedom among ser- merous occasions including “So Long, is not at all clear that the manpower pool rine Act, 1920 and is enshrined in more vice providers. Owners need not com-

American Flag – It Was So Nice to Fly can be readily redirected from existing than one place in the U.S. Code. It is ply with any U.S. tax, labor or similar

You” in the Naval War College Review commercial employment to manning re- also re? ected in the National Security economic laws yet can freely sell ocean in 1993. These are but a small sample of serve vessels. There are a number of Directive on Sealift (No. 28 issued Oc- services to and from the United States. the pleas for help. historical examples when the pool size tober 5, 1989).

U.S.-? ag vessel owners, like owners of appeared more than adequate but it was The reasons for this objective have re- other national registries, have to comply

Dire State of the Fleet still dif? cult to draw on the pool in an mained constant. As set forth by Admi- with all of those laws because of the very

What is different today is that the for- emergency suf? cient to meet all vessel ral R. E. Coontz, Chief of Naval Opera- essence of a national registry – which is eign trading U.S.-? ag ? eet has shrunk activation needs. For example, person- tions, before the U.S. Senate Committee that the vessel owner must be domiciled to the point that any further substantial nel shortages caused delays in about on Commerce on February 7, 1920 – “In in the ? ag state in a meaningful way. So, decline is likely to make the situation ir- 40 percent of scheduled sailings during my opinion the Navy is vitally interest- by the very nature of these national con- retrievable. As Vice Admiral William A. the Korean War when the manpower ed in the establishment of an American nections, U.S. costs are higher than open

Brown, Deputy Commander of the U.S. pool reserve was substantial. In 1990, merchant marine for the reasons, ? rst, registry costs no matter the level of U.S.

Transportation Command, testi? ed be- when the privately owned ? eet was that it is an indispensable arm of service owner ef? ciency.