With the ongoing development of deepwater pre-salt plays and a decreased demand on local content in tankers and other vessels, Brazilian national operator Petrobras and other super-majors have been looking abroad for better rates and reliable operators of shuttle tankers. Claudio Paschoa, Maritime Reporter’s correspondent in Brazil spoke to Peter Liew, Global Director – Mid Size Tankers, Crude Shipping, about AET Tankers’ history and its operations in Brazil.

AET (formerly American Eagle Tankers) was founded in Houston in 1994 primarily to conduct lightering operations in the Gulf of Mexico. The company’s fleet grew to 32 vessels (mainly Aframax tankers but also two VLCCs) by 2003, when acquired by MISC Berhad. MISC transferred its crude tankers to AET in 2004, expanding the AET fleet to more than 50 vessels. The company was renamed and rebranded as AET in 2007. The fleet continued to grow to include clean vessels, DP shuttle tankers, “first-in-class” modular capture vessels, and a fleet of chemical carriers. Today, AET remains a wholly owned subsidiary of Malaysian maritime energy logistics group, MISC Berhad. The company is headquartered in Singapore, with commercial offices in Houston, Kuala Lumpur, London, Montevideo, Panama and Rio de Janeiro with a specialist offshore lightering unit in Galveston, Texas.

Brazil Operations
AET entered the Brazilian market in 2010 when it won a long-term contract to operate two DP shuttle tankers (DPST) in the Brazilian Basin for Petrobras. In 2012, AET incorporated AET Brasil Serviços Maritimos in Rio de Janeiro to manage its Brazilian activities. A year later, AET Brazil began ship-to-ship (lightering) activities offshore Vitoria, in the state of Espirito Santo, under an exclusive contract. Combined with the lightering operations that AET performs in Uruguay since 2011, the company has performed more than 400 STS transfers in the region, since then, with the aid of three specialist lightering support vessels (LSVs) the company owns and maintains on station. In May 2018, AET was awarded a contract for a further four DP2 Suezmax Shuttle Tankers for charter to Petrobras in the Brazilian Basin. In August 2018, AET was awarded a contract by Shell to time charter a new-build DPST also for operations in Brazil. This will bring AET’s Brazilian DPST fleet to seven vessels, which places the company in the top three DPST operators in Brazil. Currently, AET operates two 105,153 dwt DPSTs, Eagle Parana and Eagle Paraiba in Brazil. These were delivered as newbuilds in 2012 and have been operating in Brazil since delivery. The four further specialist DP Suezmax shuttle tankers in Brazil will be 152,700 dwt and are currently being built by Samsung Heavy Industries (SHI) for delivery in 2020. The new vessel currently being built for charter to Shell will be similar to the four earmarked for Petrobras.

“Our DPSTs currently under construction are compliant to IMO NOx Tier 3 requirement and are being built in accordance with Petrobras’ and Shell’s latest technical requirement for DPSTs. Each will be fitted with a fully compliant ballast water management system, high power thrusters and generators fully capable of operating in harsh weather conditions. The design has been optimized with electric driven cargo pumps to improve the fuel efficiency. The switchboard has 4-split bus configuration which enhances the DP capability,” said Peter Liew. Operating DP vessels is a niche and highly skilled activity. Entry barriers are high and it takes time to build the capabilities required to perform flawless operations. Most oil and energy companies would prefer to charter these assets from owners and operators who have the scale and experience to ensure such capabilities are sustained.

“The 2010 Petrobras contract signaled AET’s entry into the shuttle tanker market and this allowed us to demonstrate our expertise and enhance our reputation in a more sophisticated arena of the petroleum logistics industry. Harnessing this experience, we continued to innovate and re-engineer our business and operations to ensure the services we deliver remain relevant to the evolving landscape and our customers’ changing needs. I am delighted that Petrobras has recognized AET’s capabilities and expertise in DP2 shuttle tanker operations with the award of this new contract,” said Captain Rajalingam Subramaniam, President & CEO, AET during the announcement of the new contract with Petrobras.

Tanker Crewing
AET invests heavily in crew management and training, including the training of DP certified crew. In 2014, the company achieved its first “homegrown” DP certified officer. Since 2015 AET employs Brazilian crew through a local manning agent and, in 2017, recruited its first Brazilian seafarer through its jointly owned ship management subsidiary, Eaglestar. AET, and its parent company, operate a maritime academy in Malaysia where many of its officers are recruited, trained and developed. A network of crewing and manning offices around the world ensures an adequate supply of well-trained, experienced and capable seafarers. AET affirms it is committed to growing the number of Brazilian seafarers it employs on its Brazilian based vessels and is increasing the number year-by-year. Currently AET employs 30 Brazilian seafarers in their DPSTs operating in Brazil.

Tanker Requirements for Petrobras
To meet with the highly complex construction of a DP vessel with added functionalities, AET has carried out a detailed analysis of all shipyards in the world that have the capability to meet their customers’ technical requirements, which include high operational safety standards. It is notable that AET and SHI have worked together on a range of shipbuilding projects for 22 years. These are the basic DPST requirements demanded by Petrobras:
•Suezmax DP 2 with DWT 152,000 to 154,999 MT
•Stringent design for environmental conditions with wind speed up to 25.7 m/s
•3 bow thrusters, 3.1 MW each, at least 2 Azimuth thrusters. 2 stern thrusters, 2.2 MW each, at least 1 Azimuth thruster
•Minimum 4 sets of generators
•4 independent position reference systems
•Telemetry system
•Ballast water treatment system - Electrolysis indirect type.

Expectations for Brazil
AET recognizes the Brazilian Basin as one of the world’s foremost areas for DPST operations, alongside the North/Barents Sea and the U.S. Gulf. According to AET, central to its strategy is to seek long-term contracts in niche, high entry barrier sectors that generate a secured income stream and which complement their traditional petroleum transport activities. As the search for oil reaches increasingly deeper waters, the need for offtake tankers in the form of DPSTs will increase. Having established a firm footprint in Brazil and a reputation for safe, reliable and quality operations, AET believes they are well positioned to continue to expand their operations to meet the increasing demand in this region.

AET has provided a variety of maritime logistic solutions in Brazil along the years and their customers include other IOCs operating in Brazil. With the recent influx of major O&G players, attracted by the increased pre-salt oil tenders, it is expected that the demand for more DPSTs will increase in the near future. AET points out that it is committed to expanding its business in Brazil, and consequently to training and employing local seafaring talent and will continue to do so to ensure they have a sufficient supply of quality seafarers for their growing Brazil operations. AET has an office in Rio de Janeiro, which is manned by a combination of Brazilian staff and an international team. AET’s Brazil office is headed by a Commercial/Country Manager, with more than 30 years’ shipping experience in general management, commercial management, chartering services, contracts, technical ship requirements and tanker operations, who is responsible for developing and managing all AET operations in Brazil.

“As a company, a core pillar of our strategy is to seek specialized, niche activities where we can foster long-term, mutually beneficial relationships with strategic and likeminded partners. Oil output from Brazil has continued to increase over the years and more so now that oil price has begun to reset itself. Similarly, oil exploration offshore Brazil, in particular deep water, pre-salt, exploration, has also continued to intensify in recent years, with a couple of new large fields’ production expected to come online in the coming year. All these give us strong confidence that there will be an ongoing and increasing demand for the services of DP shuttle tankers and other maritime logistics solutions in the region. We are, and will continue to invest in Brazil. We have a growing office in the country which is headed-up and largely manned by local people. We are also training and employing Brazilian seafarers to work onboard our vessels,” said Peter Liew. 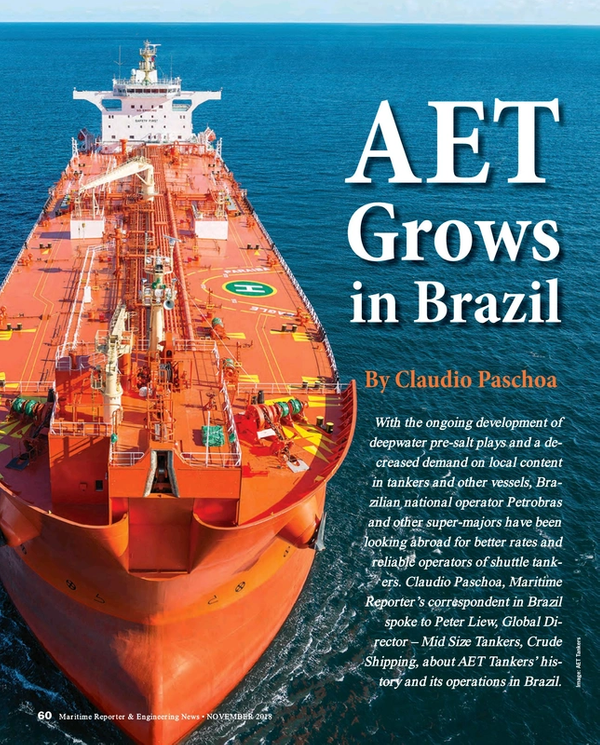