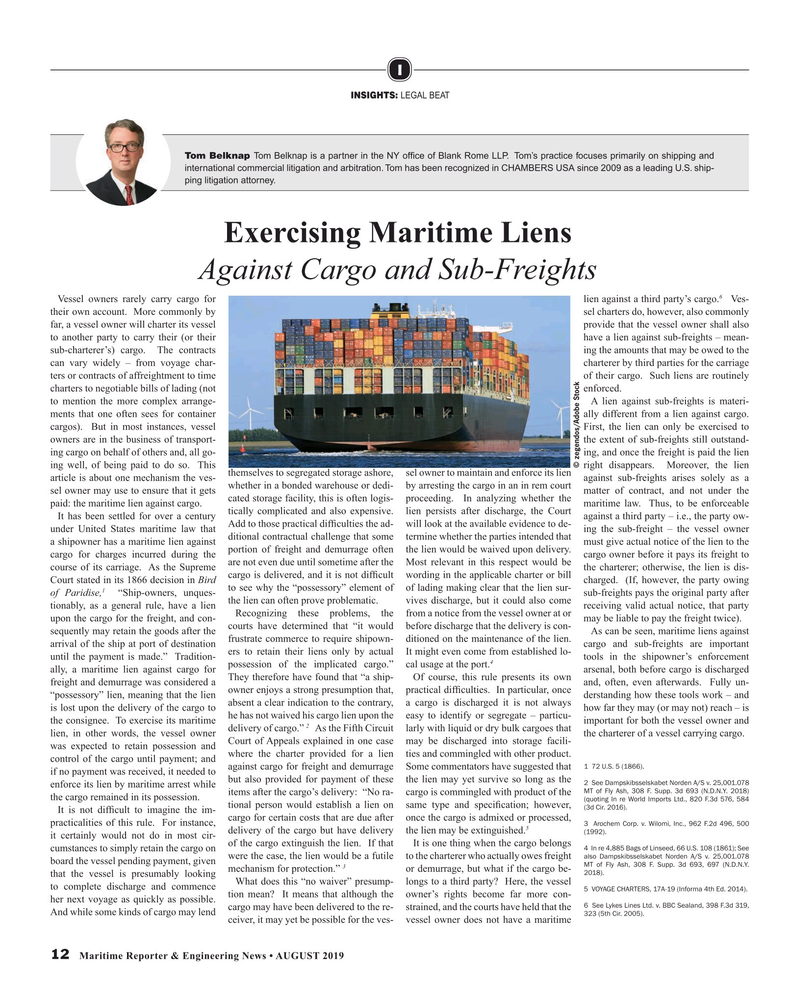 Tom Belknap Tom Belknap is a partner in the NY of? ce of Blank Rome LLP. Tom’s practice focuses primarily on shipping and international commercial litigation and arbitration. Tom has been recognized in CHAMBERS USA since 2009 as a leading U.S. ship- ping litigation attorney.

Vessel owners rarely carry cargo for lien against a third party’s cargo. Ves- their own account. More commonly by sel charters do, however, also commonly far, a vessel owner will charter its vessel provide that the vessel owner shall also to another party to carry their (or their have a lien against sub-freights – mean- sub-charterer’s) cargo. The contracts ing the amounts that may be owed to the can vary widely – from voyage char- charterer by third parties for the carriage ters or contracts of affreightment to time of their cargo. Such liens are routinely charters to negotiable bills of lading (not enforced.

to mention the more complex arrange- A lien against sub-freights is materi- ments that one often sees for container ally different from a lien against cargo. cargos). But in most instances, vessel First, the lien can only be exercised to owners are in the business of transport- the extent of sub-freights still outstand- ing cargo on behalf of others and, all go- ing, and once the freight is paid the lien © zegendos/Adobe Stock ing well, of being paid to do so. This right disappears. Moreover, the lien themselves to segregated storage ashore, sel owner to maintain and enforce its lien article is about one mechanism the ves- against sub-freights arises solely as a whether in a bonded warehouse or dedi- by arresting the cargo in an in rem court sel owner may use to ensure that it gets matter of contract, and not under the cated storage facility, this is often logis- paid: the maritime lien against cargo. proceeding. In analyzing whether the maritime law. Thus, to be enforceable

It has been settled for over a century tically complicated and also expensive. lien persists after discharge, the Court against a third party – i.e., the party ow- under United States maritime law that Add to those practical dif? culties the ad- will look at the available evidence to de- ing the sub-freight – the vessel owner ditional contractual challenge that some termine whether the parties intended that a shipowner has a maritime lien against must give actual notice of the lien to the cargo for charges incurred during the portion of freight and demurrage often the lien would be waived upon delivery. cargo owner before it pays its freight to course of its carriage. As the Supreme are not even due until sometime after the Most relevant in this respect would be the charterer; otherwise, the lien is dis- cargo is delivered, and it is not dif? cult wording in the applicable charter or bill

Court stated in its 1866 decision in Bird charged. (If, however, the party owing to see why the “possessory” element of of lading making clear that the lien sur- 1 of Paridise, “Ship-owners, unques- sub-freights pays the original party after vives discharge, but it could also come receiving valid actual notice, that party tionably, as a general rule, have a lien the lien can often prove problematic.

Recognizing these problems, the from a notice from the vessel owner at or upon the cargo for the freight, and con- may be liable to pay the freight twice).

courts have determined that “it would before discharge that the delivery is con- sequently may retain the goods after the As can be seen, maritime liens against frustrate commerce to require shipown- ditioned on the maintenance of the lien. arrival of the ship at port of destination cargo and sub-freights are important ers to retain their liens only by actual It might even come from established lo- until the payment is made.” Tradition- tools in the shipowner’s enforcement 4 arsenal, both before cargo is discharged ally, a maritime lien against cargo for possession of the implicated cargo.” cal usage at the port.

They therefore have found that “a ship- freight and demurrage was considered a Of course, this rule presents its own and, often, even afterwards. Fully un- owner enjoys a strong presumption that, practical dif? culties. In particular, once “possessory” lien, meaning that the lien derstanding how these tools work – and is lost upon the delivery of the cargo to absent a clear indication to the contrary, a cargo is discharged it is not always how far they may (or may not) reach – is he has not waived his cargo lien upon the easy to identify or segregate – particu- the consignee. To exercise its maritime important for both the vessel owner and 2 the charterer of a vessel carrying cargo.

lien, in other words, the vessel owner delivery of cargo.” As the Fifth Circuit larly with liquid or dry bulk cargoes that was expected to retain possession and Court of Appeals explained in one case may be discharged into storage facili- control of the cargo until payment; and where the charter provided for a lien ties and commingled with other product. 1 72 U.S. 5 (1866).

against cargo for freight and demurrage Some commentators have suggested that if no payment was received, it needed to but also provided for payment of these the lien may yet survive so long as the 2 See Dampskibsselskabet Norden A/S v. 25,001.078 enforce its lien by maritime arrest while

It is not dif? cult to imagine the im- practicalities of this rule. For instance, cargo for certain costs that are due after once the cargo is admixed or processed, 3 Arochem Corp. v. Wilomi, Inc., 962 F.2d 496, 500 5 delivery of the cargo but have delivery the lien may be extinguished. (1992).

it certainly would not do in most cir- of the cargo extinguish the lien. If that It is one thing when the cargo belongs 4 In re 4,885 Bags of Linseed, 66 U.S. 108 (1861); See cumstances to simply retain the cargo on also Dampskibsselskabet Norden A/S v. 25,001.078 were the case, the lien would be a futile to the charterer who actually owes freight board the vessel pending payment, given

that the vessel is presumably looking mechanism for protection.” or demurrage, but what if the cargo be-

What does this “no waiver” presump- longs to a third party? Here, the vessel to complete discharge and commence tion mean? It means that although the owner’s rights become far more con- 5 VOYAGE CHARTERS, 17A-19 (Informa 4th Ed. 2014).

her next voyage as quickly as possible. 6 See Lykes Lines Ltd. v. BBC Sealand, 398 F.3d 319, cargo may have been delivered to the re- strained, and the courts have held that the

ceiver, it may yet be possible for the ves- vessel owner does not have a maritime 12 Maritime Reporter & Engineering News • AUGUST 2019