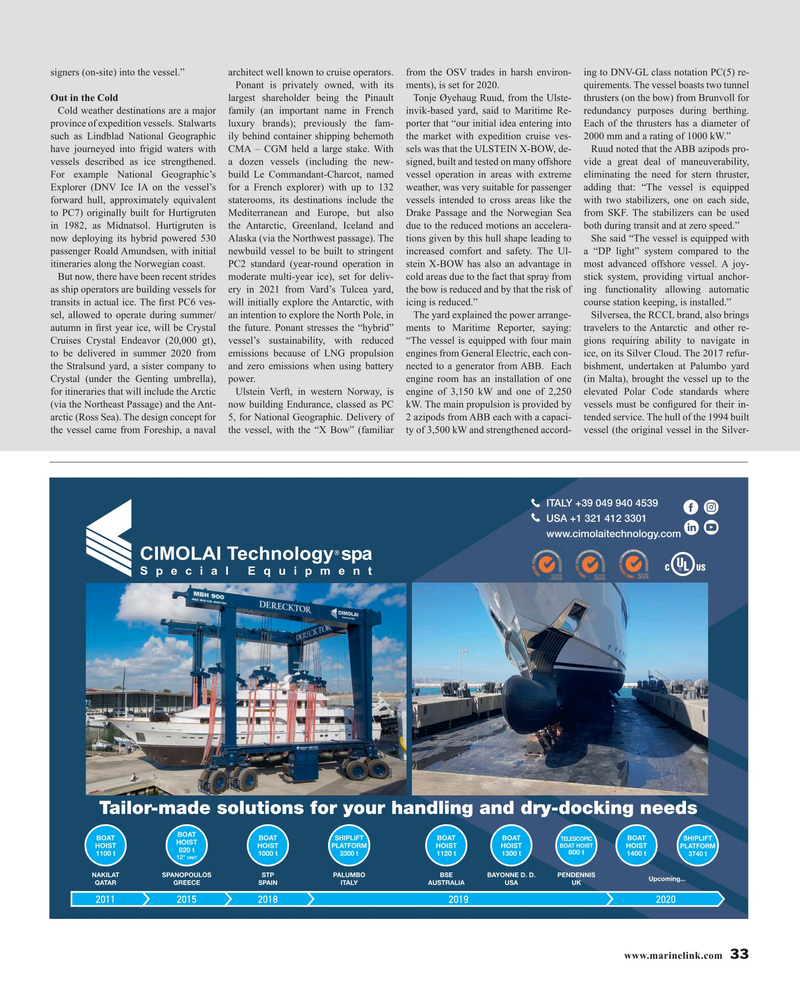 signers (on-site) into the vessel.” architect well known to cruise operators. from the OSV trades in harsh environ- ing to DNV-GL class notation PC(5) re-

Ponant is privately owned, with its ments), is set for 2020. quirements. The vessel boasts two tunnel

Out in the Cold largest shareholder being the Pinault Tonje Øyehaug Ruud, from the Ulste- thrusters (on the bow) from Brunvoll for

Cold weather destinations are a major family (an important name in French invik-based yard, said to Maritime Re- redundancy purposes during berthing. province of expedition vessels. Stalwarts luxury brands); previously the fam- porter that “our initial idea entering into Each of the thrusters has a diameter of such as Lindblad National Geographic ily behind container shipping behemoth the market with expedition cruise ves- 2000 mm and a rating of 1000 kW.” have journeyed into frigid waters with CMA – CGM held a large stake. With sels was that the ULSTEIN X-BOW, de- Ruud noted that the ABB azipods pro- vessels described as ice strengthened. a dozen vessels (including the new- signed, built and tested on many offshore vide a great deal of maneuverability,

Explorer (DNV Ice IA on the vessel’s for a French explorer) with up to 132 weather, was very suitable for passenger adding that: “The vessel is equipped forward hull, approximately equivalent staterooms, its destinations include the vessels intended to cross areas like the with two stabilizers, one on each side, to PC7) originally built for Hurtigruten Mediterranean and Europe, but also Drake Passage and the Norwegian Sea from SKF. The stabilizers can be used in 1982, as Midnatsol. Hurtigruten is the Antarctic, Greenland, Iceland and due to the reduced motions an accelera- both during transit and at zero speed.” now deploying its hybrid powered 530 Alaska (via the Northwest passage). The tions given by this hull shape leading to She said “The vessel is equipped with passenger Roald Amundsen, with initial newbuild vessel to be built to stringent increased comfort and safety. The Ul- a “DP light” system compared to the itineraries along the Norwegian coast. PC2 standard (year-round operation in stein X-BOW has also an advantage in most advanced offshore vessel. A joy-

But now, there have been recent strides moderate multi-year ice), set for deliv- cold areas due to the fact that spray from stick system, providing virtual anchor- as ship operators are building vessels for ery in 2021 from Vard’s Tulcea yard, the bow is reduced and by that the risk of ing functionality allowing automatic transits in actual ice. The ? rst PC6 ves- will initially explore the Antarctic, with icing is reduced.” course station keeping, is installed.” sel, allowed to operate during summer/ an intention to explore the North Pole, in The yard explained the power arrange- Silversea, the RCCL brand, also brings autumn in ? rst year ice, will be Crystal the future. Ponant stresses the “hybrid” ments to Maritime Reporter, saying: travelers to the Antarctic and other re-

Cruises Crystal Endeavor (20,000 gt), vessel’s sustainability, with reduced “The vessel is equipped with four main gions requiring ability to navigate in to be delivered in summer 2020 from emissions because of LNG propulsion engines from General Electric, each con- ice, on its Silver Cloud. The 2017 refur- the Stralsund yard, a sister company to and zero emissions when using battery nected to a generator from ABB. Each bishment, undertaken at Palumbo yard

Crystal (under the Genting umbrella), power. engine room has an installation of one (in Malta), brought the vessel up to the for itineraries that will include the Arctic Ulstein Verft, in western Norway, is engine of 3,150 kW and one of 2,250 elevated Polar Code standards where (via the Northeast Passage) and the Ant- now building Endurance, classed as PC kW. The main propulsion is provided by vessels must be con? gured for their in- arctic (Ross Sea). The design concept for 5, for National Geographic. Delivery of 2 azipods from ABB each with a capaci- tended service. The hull of the 1994 built the vessel came from Foreship, a naval the vessel, with the “X Bow” (familiar ty of 3,500 kW and strengthened accord- vessel (the original vessel in the Silver-

Tailor-made solutions for your handling and dry-docking needs