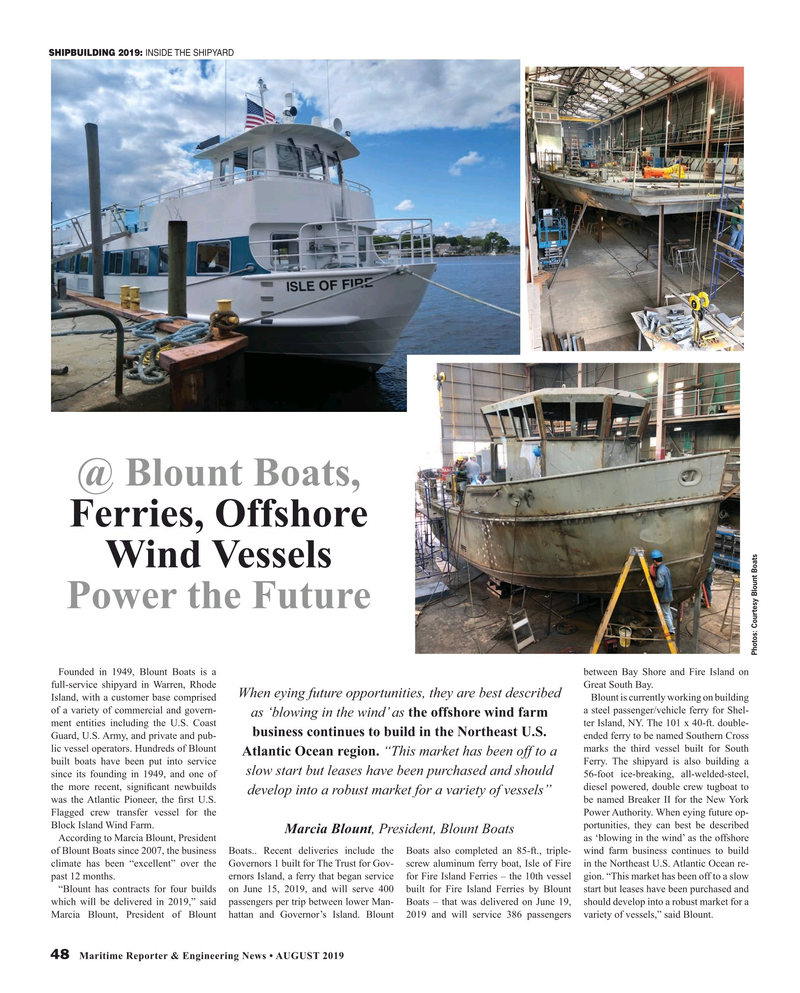 SHIPBUILDING 2019: INSIDE THE SHIPYARD @ Blount Boats,

Founded in 1949, Blount Boats is a between Bay Shore and Fire Island on full-service shipyard in Warren, Rhode Great South Bay.

When eying future opportunities, they are best described

Island, with a customer base comprised Blount is currently working on building of a variety of commercial and govern- a steel passenger/vehicle ferry for Shel- as ‘blowing in the wind’ as the offshore wind farm ment entities including the U.S. Coast ter Island, NY. The 101 x 40-ft. double- business continues to build in the Northeast U.S.

Atlantic Ocean region. “This market has been off to a built boats have been put into service Ferry. The shipyard is also building a slow start but leases have been purchased and should since its founding in 1949, and one of 56-foot ice-breaking, all-welded-steel, the more recent, signi? cant newbuilds diesel powered, double crew tugboat to develop into a robust market for a variety of vessels” was the Atlantic Pioneer, the ? rst U.S. be named Breaker II for the New York

Block Island Wind Farm. portunities, they can best be described

According to Marcia Blount, President as ‘blowing in the wind’ as the offshore of Blount Boats since 2007, the business Boats.. Recent deliveries include the Boats also completed an 85-ft., triple- wind farm business continues to build climate has been “excellent” over the Governors 1 built for The Trust for Gov- screw aluminum ferry boat, Isle of Fire in the Northeast U.S. Atlantic Ocean re- past 12 months. ernors Island, a ferry that began service for Fire Island Ferries – the 10th vessel gion. “This market has been off to a slow “Blount has contracts for four builds on June 15, 2019, and will serve 400 built for Fire Island Ferries by Blount start but leases have been purchased and which will be delivered in 2019,” said passengers per trip between lower Man- Boats – that was delivered on June 19, should develop into a robust market for a