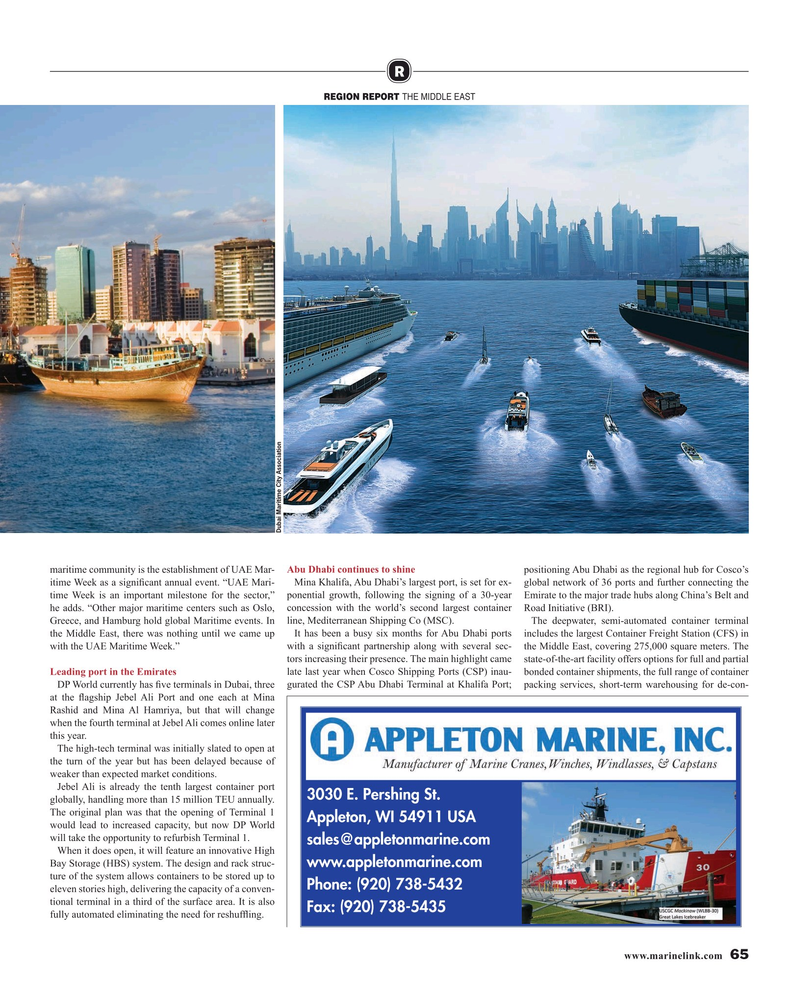 Dubai Maritime City Association maritime community is the establishment of UAE Mar- Abu Dhabi continues to shine positioning Abu Dhabi as the regional hub for Cosco’s itime Week as a signi? cant annual event. “UAE Mari- Mina Khalifa, Abu Dhabi’s largest port, is set for ex- global network of 36 ports and further connecting the time Week is an important milestone for the sector,” ponential growth, following the signing of a 30-year Emirate to the major trade hubs along China’s Belt and he adds. “Other major maritime centers such as Oslo, concession with the world’s second largest container Road Initiative (BRI).

Greece, and Hamburg hold global Maritime events. In line, Mediterranean Shipping Co (MSC). The deepwater, semi-automated container terminal the Middle East, there was nothing until we came up It has been a busy six months for Abu Dhabi ports includes the largest Container Freight Station (CFS) in with the UAE Maritime Week.” with a signi? cant partnership along with several sec- the Middle East, covering 275,000 square meters. The tors increasing their presence. The main highlight came state-of-the-art facility offers options for full and partial

DP World currently has ? ve terminals in Dubai, three gurated the CSP Abu Dhabi Terminal at Khalifa Port; packing services, short-term warehousing for de-con- at the ? agship Jebel Ali Port and one each at Mina

Rashid and Mina Al Hamriya, but that will change when the fourth terminal at Jebel Ali comes online later this year.

The high-tech terminal was initially slated to open at the turn of the year but has been delayed because of weaker than expected market conditions.

The original plan was that the opening of Terminal 1

Appleton, WI 54911 USA would lead to increased capacity, but now DP World will take the opportunity to refurbish Terminal 1.

When it does open, it will feature an innovative High

Bay Storage (HBS) system. The design and rack struc- www.appletonmarine.com ture of the system allows containers to be stored up to

Phone: (920) 738-5432 eleven stories high, delivering the capacity of a conven- tional terminal in a third of the surface area. It is also