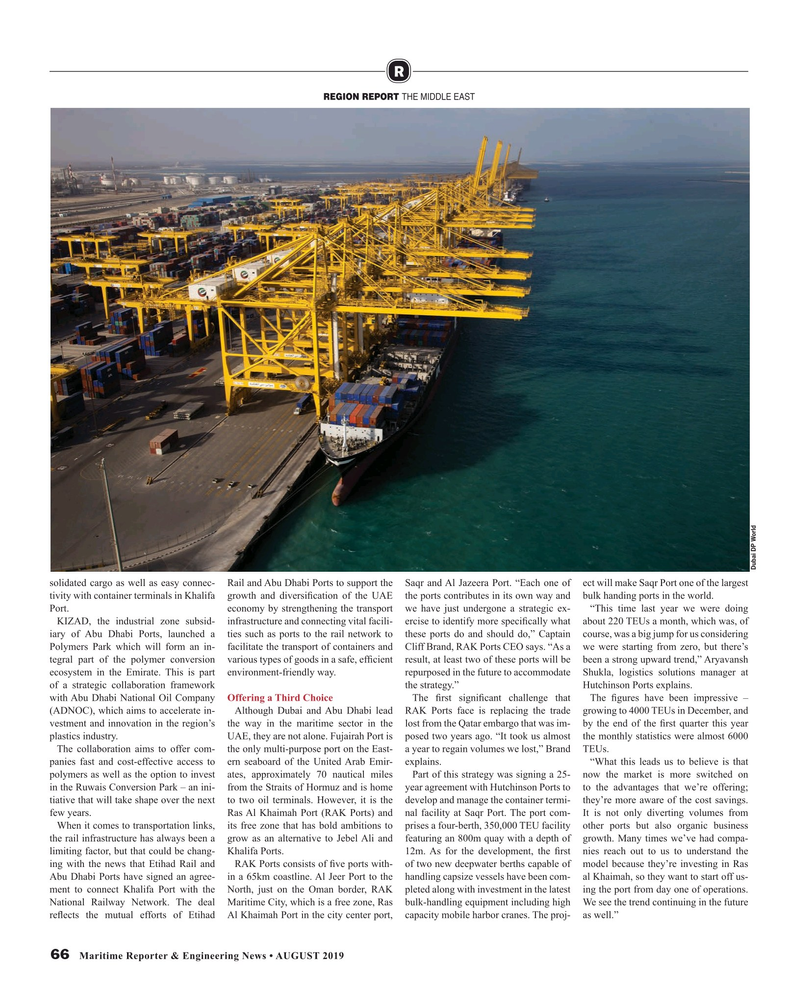 Dubai DP World solidated cargo as well as easy connec- Rail and Abu Dhabi Ports to support the Saqr and Al Jazeera Port. “Each one of ect will make Saqr Port one of the largest tivity with container terminals in Khalifa growth and diversi? cation of the UAE the ports contributes in its own way and bulk handing ports in the world.

Port. economy by strengthening the transport we have just undergone a strategic ex- “This time last year we were doing

KIZAD, the industrial zone subsid- infrastructure and connecting vital facili- ercise to identify more speci? cally what about 220 TEUs a month, which was, of iary of Abu Dhabi Ports, launched a ties such as ports to the rail network to these ports do and should do,” Captain course, was a big jump for us considering

Polymers Park which will form an in- facilitate the transport of containers and Cliff Brand, RAK Ports CEO says. “As a we were starting from zero, but there’s tegral part of the polymer conversion various types of goods in a safe, ef? cient result, at least two of these ports will be been a strong upward trend,” Aryavansh ecosystem in the Emirate. This is part environment-friendly way. repurposed in the future to accommodate Shukla, logistics solutions manager at of a strategic collaboration framework the strategy.” Hutchinson Ports explains. with Abu Dhabi National Oil Company Offering a Third Choice The ? rst signi? cant challenge that The ? gures have been impressive – (ADNOC), which aims to accelerate in- Although Dubai and Abu Dhabi lead RAK Ports face is replacing the trade growing to 4000 TEUs in December, and vestment and innovation in the region’s the way in the maritime sector in the lost from the Qatar embargo that was im- by the end of the ? rst quarter this year plastics industry. UAE, they are not alone. Fujairah Port is posed two years ago. “It took us almost the monthly statistics were almost 6000

The collaboration aims to offer com- the only multi-purpose port on the East- a year to regain volumes we lost,” Brand TEUs.

panies fast and cost-effective access to ern seaboard of the United Arab Emir- explains. “What this leads us to believe is that polymers as well as the option to invest ates, approximately 70 nautical miles Part of this strategy was signing a 25- now the market is more switched on in the Ruwais Conversion Park – an ini- from the Straits of Hormuz and is home year agreement with Hutchinson Ports to to the advantages that we’re offering; tiative that will take shape over the next to two oil terminals. However, it is the develop and manage the container termi- they’re more aware of the cost savings. few years. Ras Al Khaimah Port (RAK Ports) and nal facility at Saqr Port. The port com- It is not only diverting volumes from

When it comes to transportation links, its free zone that has bold ambitions to prises a four-berth, 350,000 TEU facility other ports but also organic business the rail infrastructure has always been a grow as an alternative to Jebel Ali and featuring an 800m quay with a depth of growth. Many times we’ve had compa- limiting factor, but that could be chang- Khalifa Ports. 12m. As for the development, the ? rst nies reach out to us to understand the ing with the news that Etihad Rail and RAK Ports consists of ? ve ports with- of two new deepwater berths capable of model because they’re investing in Ras

Abu Dhabi Ports have signed an agree- in a 65km coastline. Al Jeer Port to the handling capsize vessels have been com- al Khaimah, so they want to start off us- ment to connect Khalifa Port with the North, just on the Oman border, RAK pleted along with investment in the latest ing the port from day one of operations.

National Railway Network. The deal Maritime City, which is a free zone, Ras bulk-handling equipment including high We see the trend continuing in the future re? ects the mutual efforts of Etihad Al Khaimah Port in the city center port, capacity mobile harbor cranes. The proj- as well.” 66 Maritime Reporter & Engineering News • AUGUST 2019