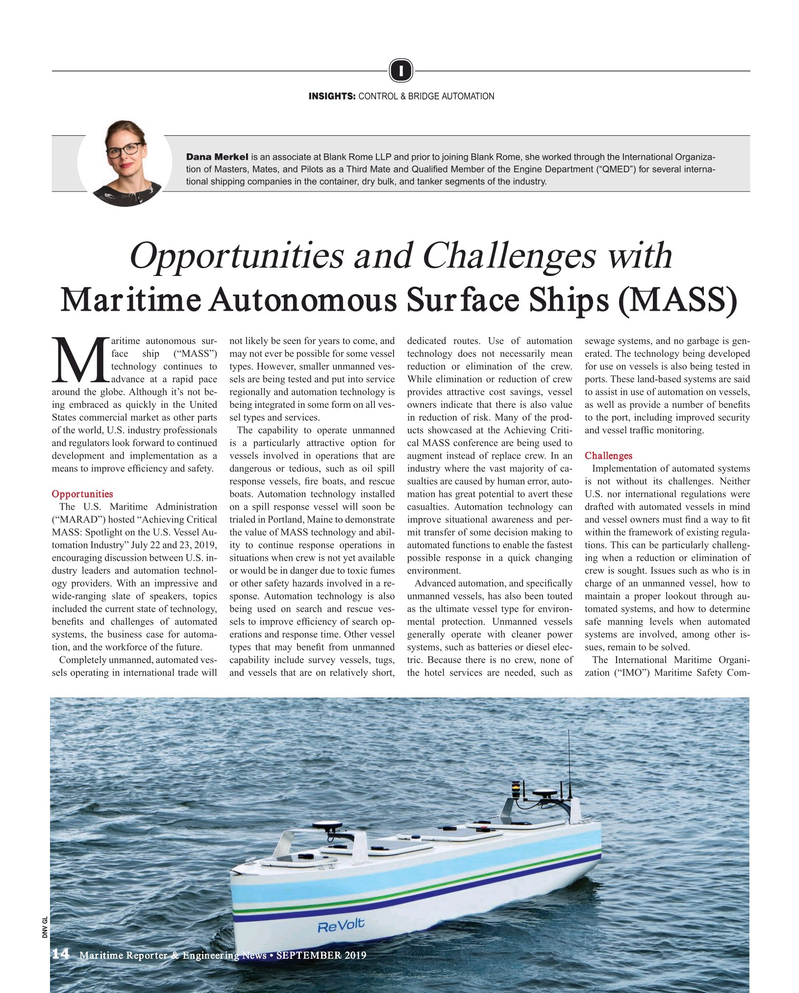 Dana Merkel is an associate at Blank Rome LLP and prior to joining Blank Rome, she worked through the International Organiza- tion of Masters, Mates, and Pilots as a Third Mate and Quali? ed Member of the Engine Department (“QMED”) for several interna- tional shipping companies in the container, dry bulk, and tanker segments of the industry.

Opportunities and Challenges with

Maritime Autonomous Surface Ships (MASS) aritime autonomous sur- not likely be seen for years to come, and dedicated routes. Use of automation sewage systems, and no garbage is gen- face ship (“MASS”) may not ever be possible for some vessel technology does not necessarily mean erated. The technology being developed technology continues to types. However, smaller unmanned ves- reduction or elimination of the crew. for use on vessels is also being tested in

Madvance at a rapid pace sels are being tested and put into service While elimination or reduction of crew ports. These land-based systems are said around the globe. Although it’s not be- regionally and automation technology is provides attractive cost savings, vessel to assist in use of automation on vessels, ing embraced as quickly in the United being integrated in some form on all ves- owners indicate that there is also value as well as provide a number of bene? ts

States commercial market as other parts sel types and services. in reduction of risk. Many of the prod- to the port, including improved security of the world, U.S. industry professionals The capability to operate unmanned ucts showcased at the Achieving Criti- and vessel traf? c monitoring.

and regulators look forward to continued is a particularly attractive option for cal MASS conference are being used to development and implementation as a vessels involved in operations that are augment instead of replace crew. In an Challenges means to improve ef? ciency and safety. dangerous or tedious, such as oil spill industry where the vast majority of ca- Implementation of automated systems response vessels, ? re boats, and rescue sualties are caused by human error, auto- is not without its challenges. Neither

The U.S. Maritime Administration on a spill response vessel will soon be casualties. Automation technology can drafted with automated vessels in mind (“MARAD”) hosted “Achieving Critical trialed in Portland, Maine to demonstrate improve situational awareness and per- and vessel owners must ? nd a way to ? t

MASS: Spotlight on the U.S. Vessel Au- the value of MASS technology and abil- mit transfer of some decision making to within the framework of existing regula- tomation Industry” July 22 and 23, 2019, ity to continue response operations in automated functions to enable the fastest tions. This can be particularly challeng- encouraging discussion between U.S. in- situations when crew is not yet available possible response in a quick changing ing when a reduction or elimination of dustry leaders and automation technol- or would be in danger due to toxic fumes environment. crew is sought. Issues such as who is in ogy providers. With an impressive and or other safety hazards involved in a re- Advanced automation, and speci? cally charge of an unmanned vessel, how to wide-ranging slate of speakers, topics sponse. Automation technology is also unmanned vessels, has also been touted maintain a proper lookout through au- included the current state of technology, being used on search and rescue ves- as the ultimate vessel type for environ- tomated systems, and how to determine bene? ts and challenges of automated sels to improve ef? ciency of search op- mental protection. Unmanned vessels safe manning levels when automated systems, the business case for automa- erations and response time. Other vessel generally operate with cleaner power systems are involved, among other is- tion, and the workforce of the future. types that may bene? t from unmanned systems, such as batteries or diesel elec- sues, remain to be solved.

Completely unmanned, automated ves- capability include survey vessels, tugs, tric. Because there is no crew, none of The International Maritime Organi- sels operating in international trade will and vessels that are on relatively short, the hotel services are needed, such as zation (“IMO”) Maritime Safety Com-