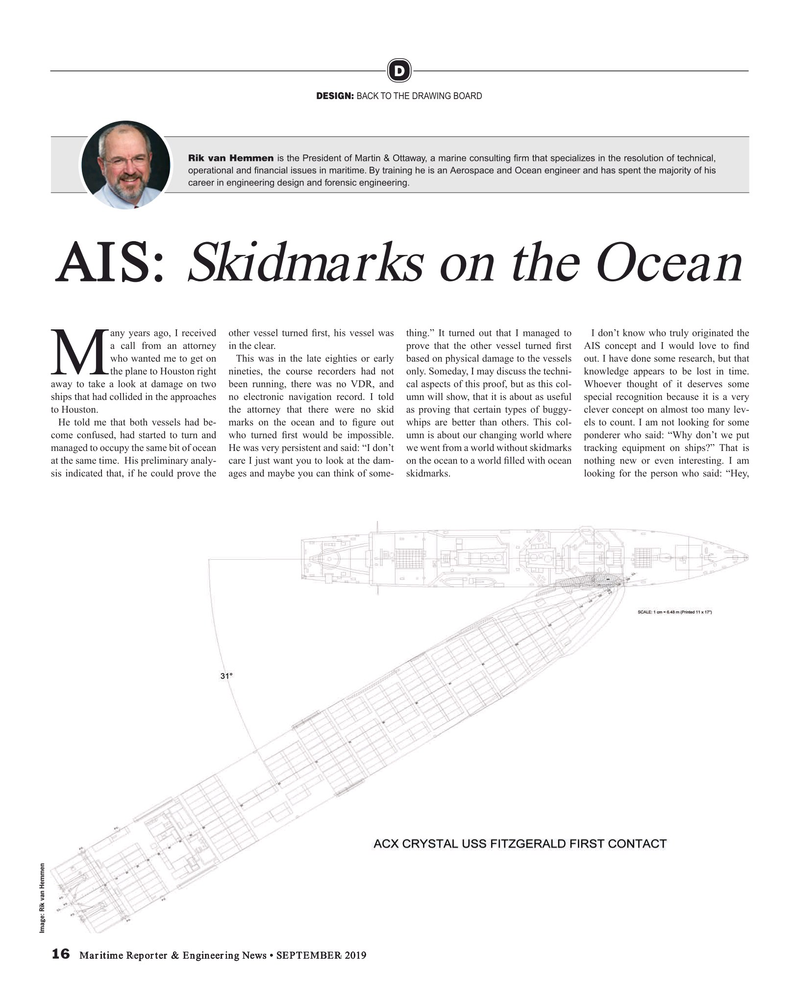 DESIGN: BACK TO THE DRAWING BOARD

Rik van Hemmen is the President of Martin & Ottaway, a marine consulting ? rm that specializes in the resolution of technical, operational and ? nancial issues in maritime. By training he is an Aerospace and Ocean engineer and has spent the majority of his career in engineering design and forensic engineering.

AIS: Skidmarks on the Ocean any years ago, I received other vessel turned ? rst, his vessel was thing.” It turned out that I managed to I don’t know who truly originated the a call from an attorney in the clear. prove that the other vessel turned ? rst AIS concept and I would love to ? nd who wanted me to get on This was in the late eighties or early based on physical damage to the vessels out. I have done some research, but that the plane to Houston right nineties, the course recorders had not only. Someday, I may discuss the techni- knowledge appears to be lost in time.

M away to take a look at damage on two been running, there was no VDR, and cal aspects of this proof, but as this col- Whoever thought of it deserves some ships that had collided in the approaches no electronic navigation record. I told umn will show, that it is about as useful special recognition because it is a very to Houston. the attorney that there were no skid as proving that certain types of buggy- clever concept on almost too many lev-

He told me that both vessels had be- marks on the ocean and to ? gure out whips are better than others. This col- els to count. I am not looking for some come confused, had started to turn and who turned ? rst would be impossible. umn is about our changing world where ponderer who said: “Why don’t we put managed to occupy the same bit of ocean He was very persistent and said: “I don’t we went from a world without skidmarks tracking equipment on ships?” That is at the same time. His preliminary analy- care I just want you to look at the dam- on the ocean to a world ? lled with ocean nothing new or even interesting. I am sis indicated that, if he could prove the ages and maybe you can think of some- skidmarks. looking for the person who said: “Hey,