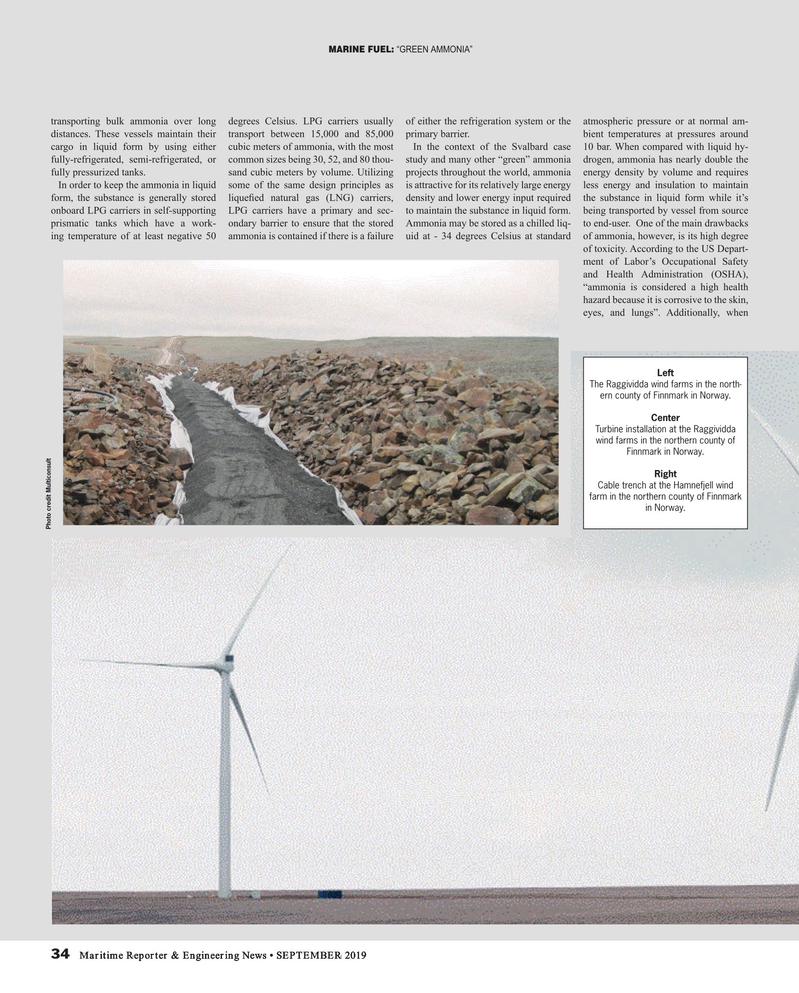 MARINE FUEL: “GREEN AMMONIA” transporting bulk ammonia over long degrees Celsius. LPG carriers usually of either the refrigeration system or the atmospheric pressure or at normal am- distances. These vessels maintain their transport between 15,000 and 85,000 primary barrier. bient temperatures at pressures around cargo in liquid form by using either cubic meters of ammonia, with the most In the context of the Svalbard case 10 bar. When compared with liquid hy- fully-refrigerated, semi-refrigerated, or common sizes being 30, 52, and 80 thou- study and many other “green” ammonia drogen, ammonia has nearly double the fully pressurized tanks. sand cubic meters by volume. Utilizing projects throughout the world, ammonia energy density by volume and requires

In order to keep the ammonia in liquid some of the same design principles as is attractive for its relatively large energy less energy and insulation to maintain form, the substance is generally stored lique? ed natural gas (LNG) carriers, density and lower energy input required the substance in liquid form while it’s onboard LPG carriers in self-supporting LPG carriers have a primary and sec- to maintain the substance in liquid form. being transported by vessel from source prismatic tanks which have a work- ondary barrier to ensure that the stored Ammonia may be stored as a chilled liq- to end-user. One of the main drawbacks ing temperature of at least negative 50 ammonia is contained if there is a failure uid at - 34 degrees Celsius at standard of ammonia, however, is its high degree of toxicity. According to the US Depart- ment of Labor’s Occupational Safety and Health Administration (OSHA), “ammonia is considered a high health hazard because it is corrosive to the skin, eyes, and lungs”. Additionally, when

The Raggividda wind farms in the north- ern county of Finnmark in Norway.

Cable trench at the Hamnefjell wind farm in the northern county of Finnmark in Norway.