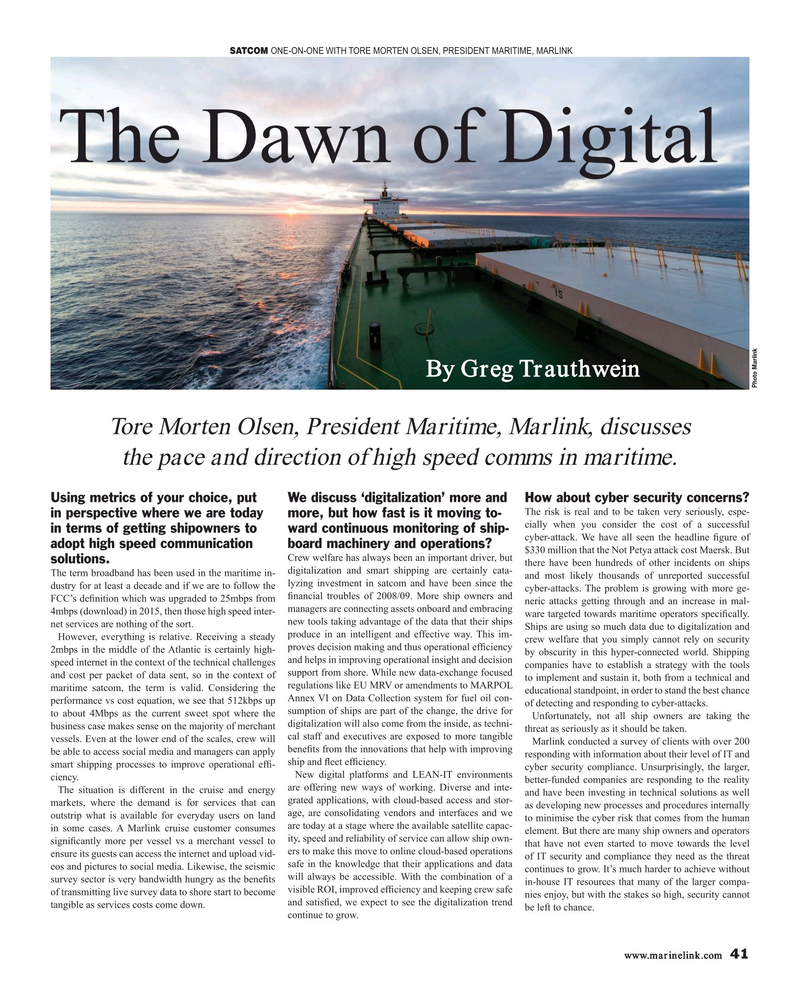 The Dawn of Digital

Using metrics of your choice, put We discuss ‘digitalization’ more and How about cyber security concerns?

The risk is real and to be taken very seriously, espe- in perspective where we are today more, but how fast is it moving to- cially when you consider the cost of a successful in terms of getting shipowners to ward continuous monitoring of ship- cyber-attack. We have all seen the headline ? gure of adopt high speed communication board machinery and operations?

$330 million that the Not Petya attack cost Maersk. But

Crew welfare has always been an important driver, but solutions.

The term broadband has been used in the maritime in- and most likely thousands of unreported successful dustry for at least a decade and if we are to follow the lyzing investment in satcom and have been since the cyber-attacks. The problem is growing with more ge-

FCC’s de? nition which was upgraded to 25mbps from ? nancial troubles of 2008/09. More ship owners and neric attacks getting through and an increase in mal- managers are connecting assets onboard and embracing 4mbps (download) in 2015, then those high speed inter- ware targeted towards maritime operators speci? cally. new tools taking advantage of the data that their ships net services are nothing of the sort.

Ships are using so much data due to digitalization and

However, everything is relative. Receiving a steady produce in an intelligent and effective way. This im- crew welfare that you simply cannot rely on security proves decision making and thus operational ef? ciency 2mbps in the middle of the Atlantic is certainly high- by obscurity in this hyper-connected world. Shipping speed internet in the context of the technical challenges and helps in improving operational insight and decision companies have to establish a strategy with the tools and cost per packet of data sent, so in the context of support from shore. While new data-exchange focused to implement and sustain it, both from a technical and maritime satcom, the term is valid. Considering the regulations like EU MRV or amendments to MARPOL educational standpoint, in order to stand the best chance performance vs cost equation, we see that 512kbps up Annex VI on Data Collection system for fuel oil con- of detecting and responding to cyber-attacks.

to about 4Mbps as the current sweet spot where the sumption of ships are part of the change, the drive for

Unfortunately, not all ship owners are taking the business case makes sense on the majority of merchant digitalization will also come from the inside, as techni- threat as seriously as it should be taken. vessels. Even at the lower end of the scales, crew will cal staff and executives are exposed to more tangible

Marlink conducted a survey of clients with over 200 be able to access social media and managers can apply bene? ts from the innovations that help with improving responding with information about their level of IT and ship and ? eet ef? ciency. smart shipping processes to improve operational ef? - cyber security compliance. Unsurprisingly, the larger,

The situation is different in the cruise and energy are offering new ways of working. Diverse and inte- and have been investing in technical solutions as well markets, where the demand is for services that can grated applications, with cloud-based access and stor- as developing new processes and procedures internally outstrip what is available for everyday users on land age, are consolidating vendors and interfaces and we to minimise the cyber risk that comes from the human in some cases. A Marlink cruise customer consumes are today at a stage where the available satellite capac- element. But there are many ship owners and operators signi? cantly more per vessel vs a merchant vessel to ity, speed and reliability of service can allow ship own- that have not even started to move towards the level ers to make this move to online cloud-based operations ensure its guests can access the internet and upload vid- of IT security and compliance they need as the threat eos and pictures to social media. Likewise, the seismic safe in the knowledge that their applications and data continues to grow. It’s much harder to achieve without survey sector is very bandwidth hungry as the bene? ts will always be accessible. With the combination of a in-house IT resources that many of the larger compa- visible ROI, improved ef? ciency and keeping crew safe of transmitting live survey data to shore start to become nies enjoy, but with the stakes so high, security cannot and satis? ed, we expect to see the digitalization trend be left to chance. tangible as services costs come down.