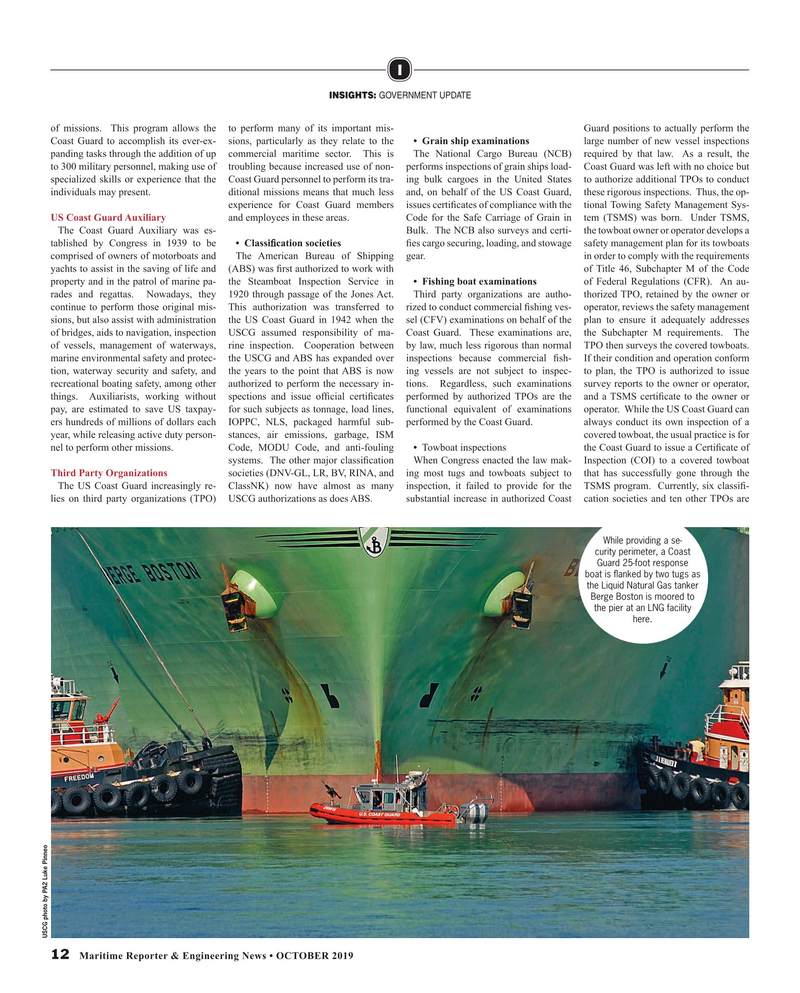 INSIGHTS: GOVERNMENT UPDATE of missions. This program allows the to perform many of its important mis- Guard positions to actually perform the

Coast Guard to accomplish its ever-ex- sions, particularly as they relate to the • Grain ship examinations large number of new vessel inspections panding tasks through the addition of up commercial maritime sector. This is The National Cargo Bureau (NCB) required by that law. As a result, the to 300 military personnel, making use of troubling because increased use of non- performs inspections of grain ships load- Coast Guard was left with no choice but specialized skills or experience that the Coast Guard personnel to perform its tra- ing bulk cargoes in the United States to authorize additional TPOs to conduct individuals may present. ditional missions means that much less and, on behalf of the US Coast Guard, these rigorous inspections. Thus, the op- experience for Coast Guard members issues certi? cates of compliance with the tional Towing Safety Management Sys-

US Coast Guard Auxiliary and employees in these areas. Code for the Safe Carriage of Grain in tem (TSMS) was born. Under TSMS,

The Coast Guard Auxiliary was es- Bulk. The NCB also surveys and certi- the towboat owner or operator develops a tablished by Congress in 1939 to be • Classi? cation societies ? es cargo securing, loading, and stowage safety management plan for its towboats comprised of owners of motorboats and The American Bureau of Shipping gear. in order to comply with the requirements yachts to assist in the saving of life and (ABS) was ? rst authorized to work with of Title 46, Subchapter M of the Code property and in the patrol of marine pa- the Steamboat Inspection Service in • Fishing boat examinations of Federal Regulations (CFR). An au- rades and regattas. Nowadays, they 1920 through passage of the Jones Act. Third party organizations are autho- thorized TPO, retained by the owner or continue to perform those original mis- This authorization was transferred to rized to conduct commercial ? shing ves- operator, reviews the safety management sions, but also assist with administration the US Coast Guard in 1942 when the sel (CFV) examinations on behalf of the plan to ensure it adequately addresses of bridges, aids to navigation, inspection USCG assumed responsibility of ma- Coast Guard. These examinations are, the Subchapter M requirements. The of vessels, management of waterways, rine inspection. Cooperation between by law, much less rigorous than normal TPO then surveys the covered towboats. marine environmental safety and protec- the USCG and ABS has expanded over inspections because commercial ? sh- If their condition and operation conform tion, waterway security and safety, and the years to the point that ABS is now ing vessels are not subject to inspec- to plan, the TPO is authorized to issue recreational boating safety, among other authorized to perform the necessary in- tions. Regardless, such examinations survey reports to the owner or operator, things. Auxiliarists, working without spections and issue of? cial certi? cates performed by authorized TPOs are the and a TSMS certi? cate to the owner or pay, are estimated to save US taxpay- for such subjects as tonnage, load lines, functional equivalent of examinations operator. While the US Coast Guard can ers hundreds of millions of dollars each IOPPC, NLS, packaged harmful sub- performed by the Coast Guard. always conduct its own inspection of a year, while releasing active duty person- stances, air emissions, garbage, ISM covered towboat, the usual practice is for nel to perform other missions. Code, MODU Code, and anti-fouling • Towboat inspections the Coast Guard to issue a Certi? cate of systems. The other major classi? cation When Congress enacted the law mak- Inspection (COI) to a covered towboat

Third Party Organizations societies (DNV-GL, LR, BV, RINA, and ing most tugs and towboats subject to that has successfully gone through the

The US Coast Guard increasingly re- ClassNK) now have almost as many inspection, it failed to provide for the TSMS program. Currently, six classi? - lies on third party organizations (TPO) USCG authorizations as does ABS. substantial increase in authorized Coast cation societies and ten other TPOs are

While providing a se- curity perimeter, a Coast

Berge Boston is moored to the pier at an LNG facility here.