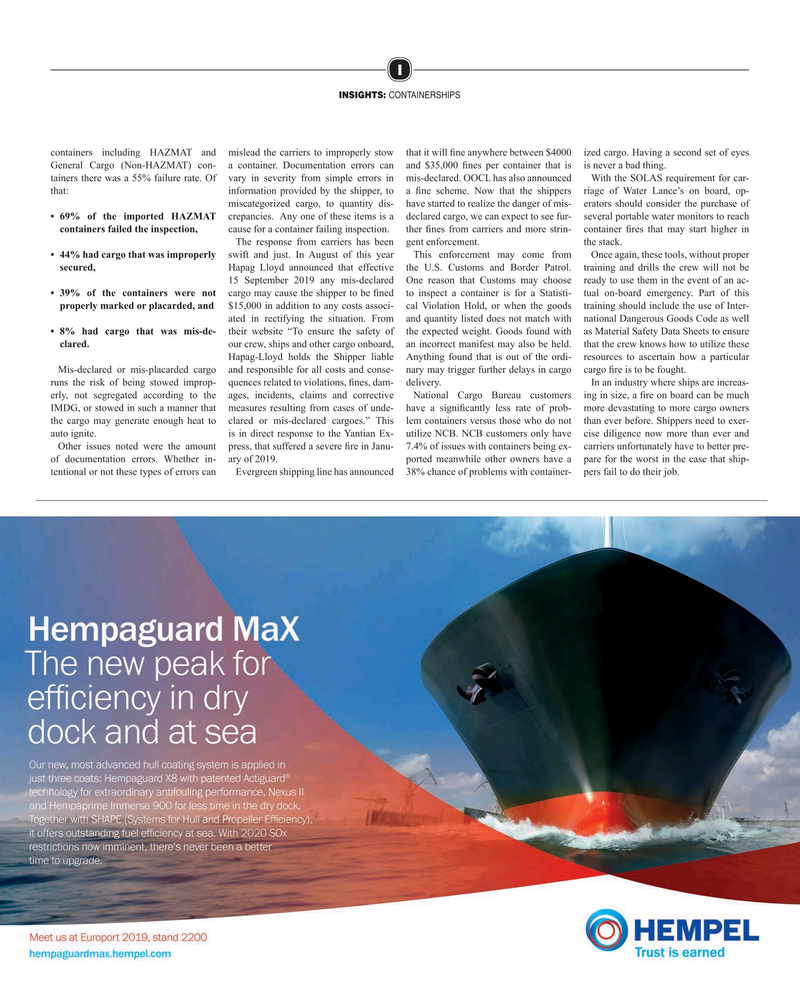 INSIGHTS: CONTAINERSHIPS containers including HAZMAT and mislead the carriers to improperly stow that it will ? ne anywhere between $4000 ized cargo. Having a second set of eyes

General Cargo (Non-HAZMAT) con- a container. Documentation errors can and $35,000 ? nes per container that is is never a bad thing.

tainers there was a 55% failure rate. Of vary in severity from simple errors in mis-declared. OOCL has also announced With the SOLAS requirement for car- that: information provided by the shipper, to a ? ne scheme. Now that the shippers riage of Water Lance’s on board, op- miscategorized cargo, to quantity dis- have started to realize the danger of mis- erators should consider the purchase of • 69% of the imported HAZMAT crepancies. Any one of these items is a declared cargo, we can expect to see fur- several portable water monitors to reach containers failed the inspection, cause for a container failing inspection. ther ? nes from carriers and more strin- container ? res that may start higher in

The response from carriers has been gent enforcement. the stack. • 44% had cargo that was improperly swift and just. In August of this year This enforcement may come from Once again, these tools, without proper secured, Hapag Lloyd announced that effective the U.S. Customs and Border Patrol. training and drills the crew will not be 15 September 2019 any mis-declared One reason that Customs may choose ready to use them in the event of an ac- • 39% of the containers were not cargo may cause the shipper to be ? ned to inspect a container is for a Statisti- tual on-board emergency. Part of this properly marked or placarded, and $15,000 in addition to any costs associ- cal Violation Hold, or when the goods training should include the use of Inter- ated in rectifying the situation. From and quantity listed does not match with national Dangerous Goods Code as well • 8% had cargo that was mis-de- their website “To ensure the safety of the expected weight. Goods found with as Material Safety Data Sheets to ensure clared. our crew, ships and other cargo onboard, an incorrect manifest may also be held. that the crew knows how to utilize these

Mis-declared or mis-placarded cargo and responsible for all costs and conse- nary may trigger further delays in cargo cargo ? re is to be fought. runs the risk of being stowed improp- quences related to violations, ? nes, dam- delivery. In an industry where ships are increas- erly, not segregated according to the ages, incidents, claims and corrective National Cargo Bureau customers ing in size, a ? re on board can be much

IMDG, or stowed in such a manner that measures resulting from cases of unde- have a signi? cantly less rate of prob- more devastating to more cargo owners the cargo may generate enough heat to clared or mis-declared cargoes.” This lem containers versus those who do not than ever before. Shippers need to exer- auto ignite. is in direct response to the Yantian Ex- utilize NCB. NCB customers only have cise diligence now more than ever and

Other issues noted were the amount press, that suffered a severe ? re in Janu- 7.4% of issues with containers being ex- carriers unfortunately have to better pre- of documentation errors. Whether in- ary of 2019. ported meanwhile other owners have a pare for the worst in the case that ship- tentional or not these types of errors can Evergreen shipping line has announced 38% chance of problems with container- pers fail to do their job.