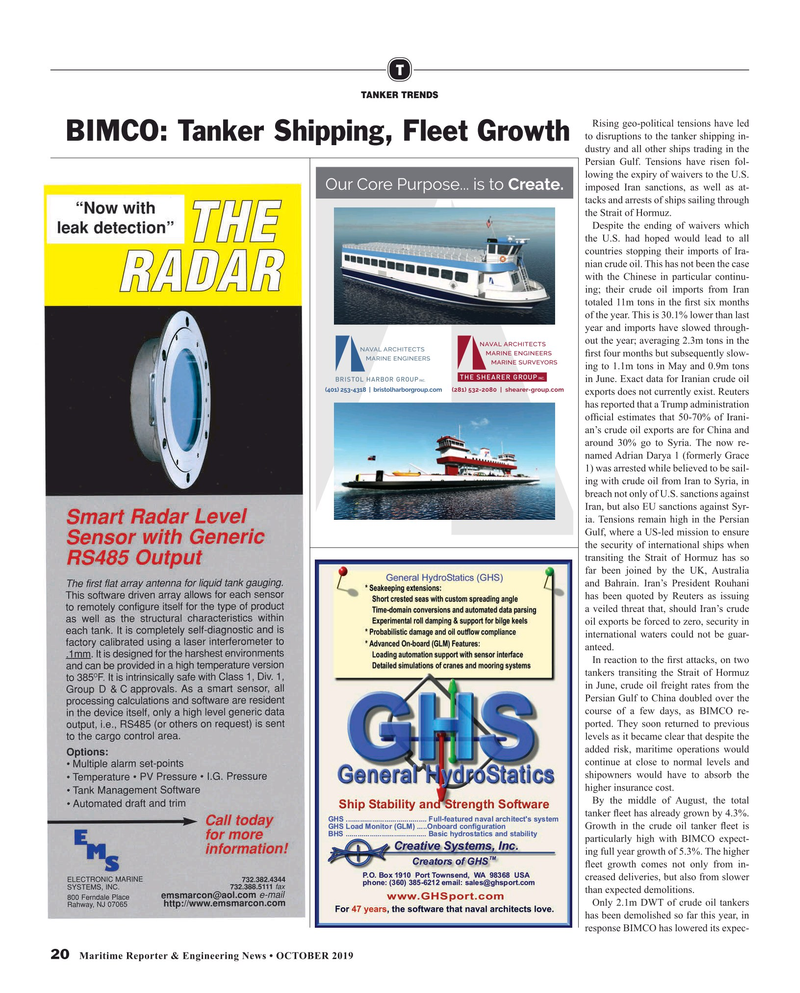 BIMCO: Tanker Shipping, Fleet Growth dustry and all other ships trading in the

Persian Gulf. Tensions have risen fol- lowing the expiry of waivers to the U.S.

Our Core Purpose... is to Create.

imposed Iran sanctions, as well as at- tacks and arrests of ships sailing through the Strait of Hormuz.

Despite the ending of waivers which the U.S. had hoped would lead to all countries stopping their imports of Ira- nian crude oil. This has not been the case with the Chinese in particular continu- ing; their crude oil imports from Iran totaled 11m tons in the ? rst six months of the year. This is 30.1% lower than last year and imports have slowed through- out the year; averaging 2.3m tons in the d?Y?CG?*??

ing to 1.1m tons in May and 0.9m tons in June. Exact data for Iranian crude oil (401) 253-4318 | bristolharborgroup.com (281) 532-2080 | shearer-group.com exports does not currently exist. Reuters has reported that a Trump administration of? cial estimates that 50-70% of Irani- an’s crude oil exports are for China and around 30% go to Syria. The now re- named Adrian Darya 1 (formerly Grace 1) was arrested while believed to be sail- ing with crude oil from Iran to Syria, in breach not only of U.S. sanctions against

Gulf, where a US-led mission to ensure the security of international ships when transiting the Strait of Hormuz has so far been joined by the UK, Australia and Bahrain. Iran’s President Rouhani has been quoted by Reuters as issuing a veiled threat that, should Iran’s crude oil exports be forced to zero, security in international waters could not be guar- anteed.

In reaction to the ? rst attacks, on two tankers transiting the Strait of Hormuz in June, crude oil freight rates from the

Persian Gulf to China doubled over the course of a few days, as BIMCO re- ported. They soon returned to previous levels as it became clear that despite the added risk, maritime operations would continue at close to normal levels and shipowners would have to absorb the higher insurance cost.

By the middle of August, the total tanker ? eet has already grown by 4.3%.

Growth in the crude oil tanker ? eet is particularly high with BIMCO expect- ing full year growth of 5.3%. The higher ? eet growth comes not only from in- creased deliveries, but also from slower than expected demolitions.

Only 2.1m DWT of crude oil tankers has been demolished so far this year, in response BIMCO has lowered its expec- 20 Maritime Reporter & Engineering News • OCTOBER 2019