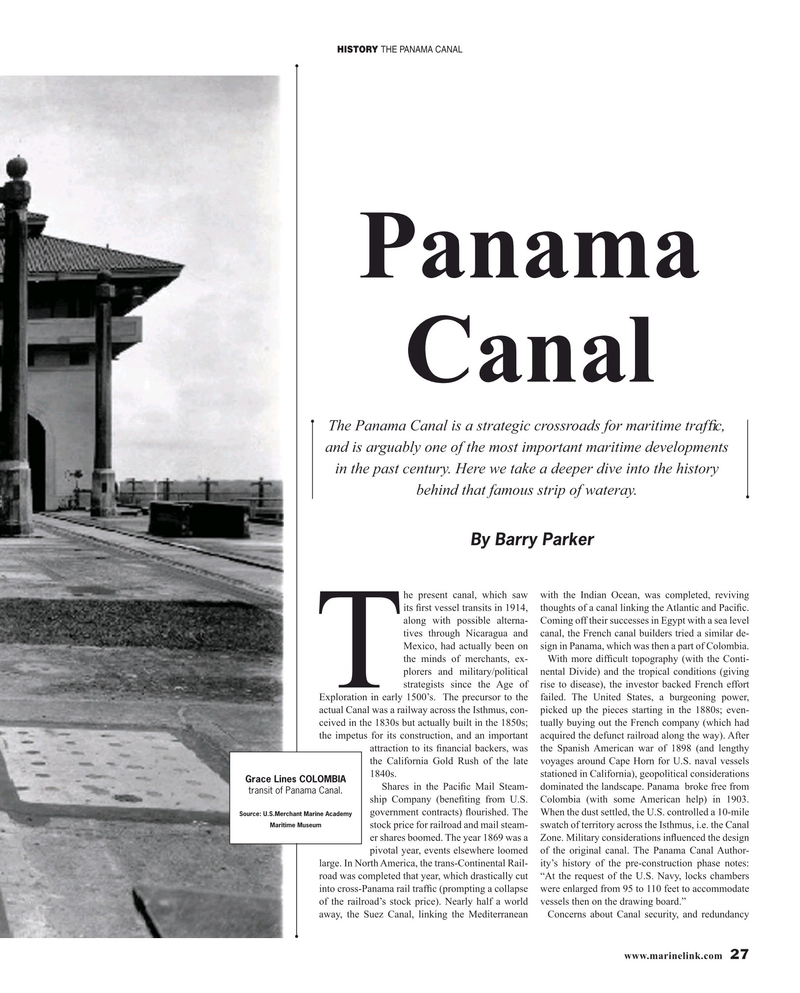 The Panama Canal is a strategic crossroads for maritime traf? c, and is arguably one of the most important maritime developments in the past century. Here we take a deeper dive into the history behind that famous strip of wateray.

By Barry Parker he present canal, which saw with the Indian Ocean, was completed, reviving its ? rst vessel transits in 1914, thoughts of a canal linking the Atlantic and Paci? c. along with possible alterna- Coming off their successes in Egypt with a sea level tives through Nicaragua and canal, the French canal builders tried a similar de-

Mexico, had actually been on sign in Panama, which was then a part of Colombia. the minds of merchants, ex- With more dif? cult topography (with the Conti- plorers and military/political nental Divide) and the tropical conditions (giving

Tstrategists since the Age of rise to disease), the investor backed French effort

Exploration in early 1500’s. The precursor to the failed. The United States, a burgeoning power, actual Canal was a railway across the Isthmus, con- picked up the pieces starting in the 1880s; even- ceived in the 1830s but actually built in the 1850s; tually buying out the French company (which had the impetus for its construction, and an important acquired the defunct railroad along the way). After attraction to its ? nancial backers, was the Spanish American war of 1898 (and lengthy the California Gold Rush of the late voyages around Cape Horn for U.S. naval vessels 1840s. stationed in California), geopolitical considerations

ship Company (bene? ting from U.S. Colombia (with some American help) in 1903. government contracts) ? ourished. The When the dust settled, the U.S. controlled a 10-mile

Maritime Museum stock price for railroad and mail steam- swatch of territory across the Isthmus, i.e. the Canal er shares boomed. The year 1869 was a Zone. Military considerations in? uenced the design pivotal year, events elsewhere loomed of the original canal. The Panama Canal Author- large. In North America, the trans-Continental Rail- ity’s history of the pre-construction phase notes: road was completed that year, which drastically cut “At the request of the U.S. Navy, locks chambers into cross-Panama rail traf? c (prompting a collapse were enlarged from 95 to 110 feet to accommodate of the railroad’s stock price). Nearly half a world vessels then on the drawing board.” away, the Suez Canal, linking the Mediterranean Concerns about Canal security, and redundancy www.marinelink.com 27