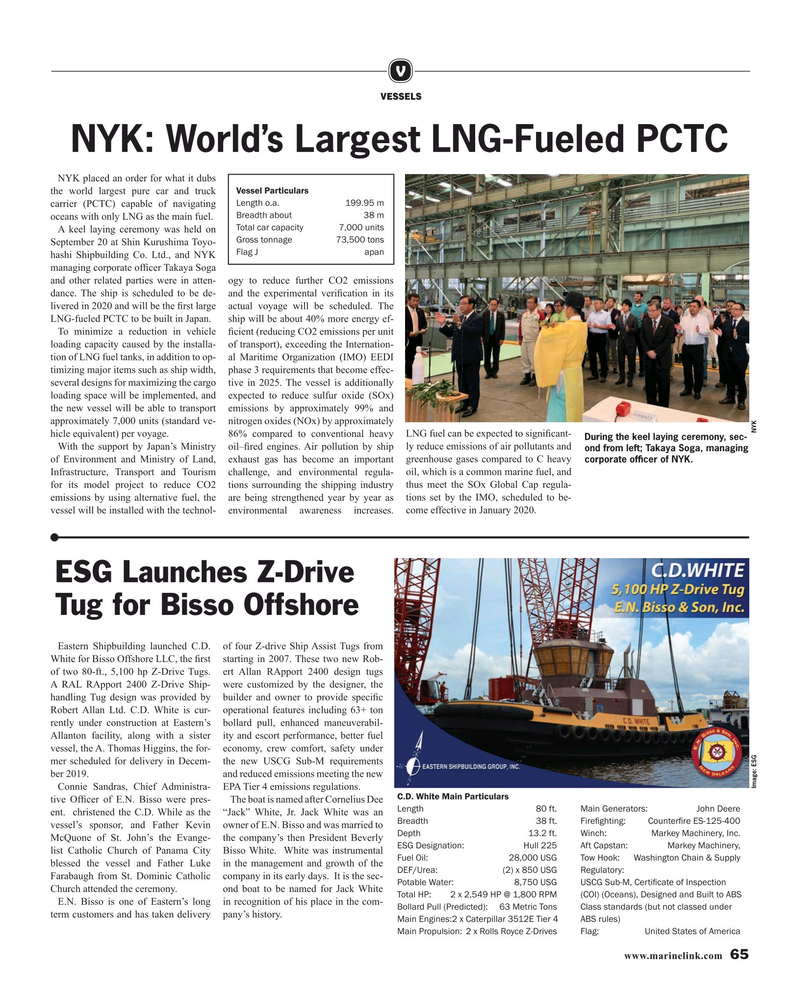 NYK placed an order for what it dubs

Breadth about 38 m oceans with only LNG as the main fuel.

A keel laying ceremony was held on

Flag J apan hashi Shipbuilding Co. Ltd., and NYK managing corporate of? cer Takaya Soga and other related parties were in atten- ogy to reduce further CO2 emissions dance. The ship is scheduled to be de- and the experimental veri?cation in its livered in 2020 and will be the ? rst large actual voyage will be scheduled. The

LNG-fueled PCTC to be built in Japan. ship will be about 40% more energy ef-

To minimize a reduction in vehicle ? cient (reducing CO2 emissions per unit loading capacity caused by the installa- of transport), exceeding the Internation- tion of LNG fuel tanks, in addition to op- al Maritime Organization (IMO) EEDI timizing major items such as ship width, phase 3 requirements that become effec- several designs for maximizing the cargo tive in 2025. The vessel is additionally loading space will be implemented, and expected to reduce sulfur oxide (SOx) the new vessel will be able to transport emissions by approximately 99% and approximately 7,000 units (standard ve- nitrogen oxides (NOx) by approximately hicle equivalent) per voyage. 86% compared to conventional heavy LNG fuel can be expected to signi? cant-

During the keel laying ceremony, sec-

With the support by Japan’s Ministry oil–? red engines. Air pollution by ship ly reduce emissions of air pollutants and ond from left; Takaya Soga, managing of Environment and Ministry of Land, exhaust gas has become an important greenhouse gases compared to C heavy corporate of? cer of NYK.

Infrastructure, Transport and Tourism challenge, and environmental regula- oil, which is a common marine fuel, and for its model project to reduce CO2 tions surrounding the shipping industry thus meet the SOx Global Cap regula- emissions by using alternative fuel, the are being strengthened year by year as tions set by the IMO, scheduled to be- vessel will be installed with the technol- environmental awareness increases. come effective in January 2020.

A RAL RApport 2400 Z-Drive Ship- were customized by the designer, the handling Tug design was provided by builder and owner to provide speci? c

Allanton facility, along with a sister ity and escort performance, better fuel vessel, the A. Thomas Higgins, the for- economy, crew comfort, safety under mer scheduled for delivery in Decem- the new USCG Sub-M requirements ber 2019. and reduced emissions meeting the new

C.D. White Main Particulars tive Of? cer of E.N. Bisso were pres- The boat is named after Cornelius Dee

Length 80 ft. Main Generators: John Deere ent. christened the C.D. While as the “Jack” White, Jr. Jack White was an

McQuone of St. John’s the Evange- the company’s then President Beverly

Fuel Oil: 28,000 USG Tow Hook: Washington Chain & Supply blessed the vessel and Father Luke in the management and growth of the

Farabaugh from St. Dominic Catholic company in its early days. It is the sec-

Church attended the ceremony. ond boat to be named for Jack White

E.N. Bisso is one of Eastern’s long in recognition of his place in the com-