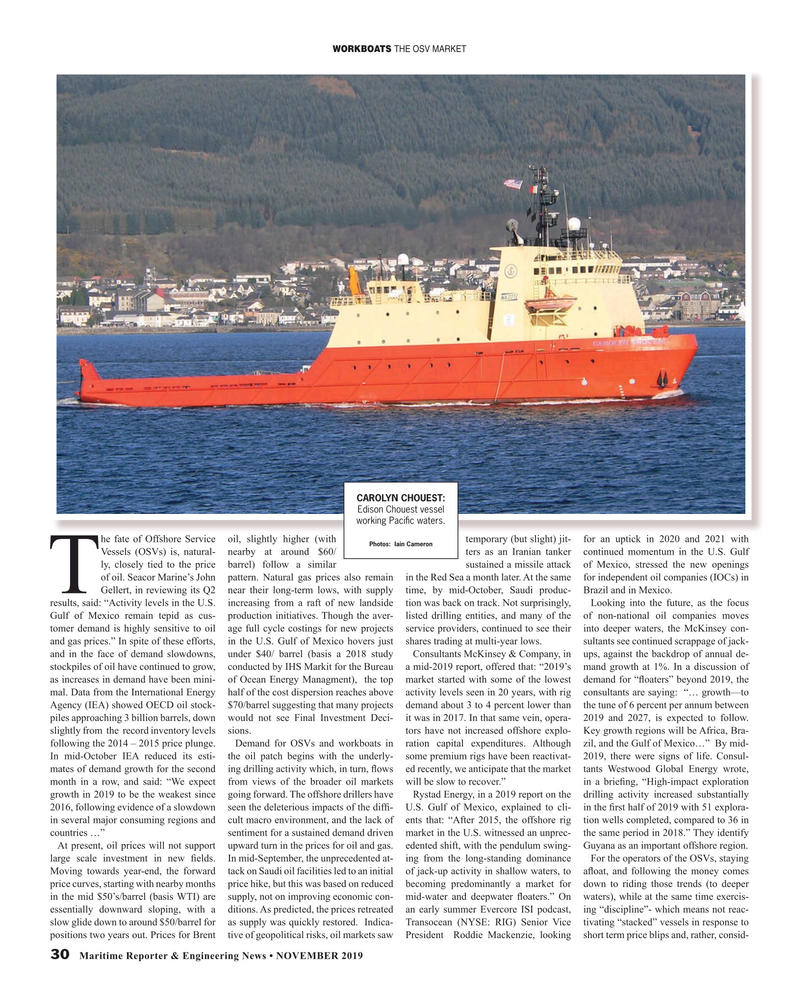 Edison Chouest vessel working Paci? c waters. he fate of Offshore Service oil, slightly higher (with temporary (but slight) jit- for an uptick in 2020 and 2021 with

Vessels (OSVs) is, natural- nearby at around $60/ ters as an Iranian tanker continued momentum in the U.S. Gulf ly, closely tied to the price barrel) follow a similar sustained a missile attack of Mexico, stressed the new openings of oil. Seacor Marine’s John pattern. Natural gas prices also remain in the Red Sea a month later. At the same for independent oil companies (IOCs) in

Gellert, in reviewing its Q2 near their long-term lows, with supply time, by mid-October, Saudi produc- Brazil and in Mexico. results, said: “Activity levels in the U.S. increasing from a raft of new landside tion was back on track. Not surprisingly, Looking into the future, as the focus

Gulf of Mexico remain tepid as cus- production initiatives. Though the aver- listed drilling entities, and many of the of non-national oil companies moves tomer demand is highly sensitive to oil age full cycle costings for new projects service providers, continued to see their into deeper waters, the McKinsey con- and gas prices.” In spite of these efforts, in the U.S. Gulf of Mexico hovers just shares trading at multi-year lows. sultants see continued scrappage of jack- and in the face of demand slowdowns, under $40/ barrel (basis a 2018 study Consultants McKinsey & Company, in ups, against the backdrop of annual de- stockpiles of oil have continued to grow, conducted by IHS Markit for the Bureau a mid-2019 report, offered that: “2019’s mand growth at 1%. In a discussion of as increases in demand have been mini- of Ocean Energy Managment), the top market started with some of the lowest demand for “? oaters” beyond 2019, the mal. Data from the International Energy half of the cost dispersion reaches above activity levels seen in 20 years, with rig consultants are saying: “… growth—to

Agency (IEA) showed OECD oil stock- $70/barrel suggesting that many projects demand about 3 to 4 percent lower than the tune of 6 percent per annum between piles approaching 3 billion barrels, down would not see Final Investment Deci- it was in 2017. In that same vein, opera- 2019 and 2027, is expected to follow. slightly from the record inventory levels sions. tors have not increased offshore explo- Key growth regions will be Africa, Bra- following the 2014 – 2015 price plunge. Demand for OSVs and workboats in ration capital expenditures. Although zil, and the Gulf of Mexico…” By mid-

In mid-October IEA reduced its esti- the oil patch begins with the underly- some premium rigs have been reactivat- 2019, there were signs of life. Consul- mates of demand growth for the second ing drilling activity which, in turn, ? ows ed recently, we anticipate that the market tants Westwood Global Energy wrote, month in a row, and said: “We expect from views of the broader oil markets will be slow to recover.” in a brie? ng, “High-impact exploration growth in 2019 to be the weakest since going forward. The offshore drillers have Rystad Energy, in a 2019 report on the drilling activity increased substantially 2016, following evidence of a slowdown seen the deleterious impacts of the dif? - U.S. Gulf of Mexico, explained to cli- in the ? rst half of 2019 with 51 explora- in several major consuming regions and cult macro environment, and the lack of ents that: “After 2015, the offshore rig tion wells completed, compared to 36 in countries …” sentiment for a sustained demand driven market in the U.S. witnessed an unprec- the same period in 2018.” They identify

At present, oil prices will not support upward turn in the prices for oil and gas. edented shift, with the pendulum swing- Guyana as an important offshore region.

large scale investment in new ? elds. In mid-September, the unprecedented at- ing from the long-standing dominance For the operators of the OSVs, staying

Moving towards year-end, the forward tack on Saudi oil facilities led to an initial of jack-up activity in shallow waters, to a? oat, and following the money comes price curves, starting with nearby months price hike, but this was based on reduced becoming predominantly a market for down to riding those trends (to deeper in the mid $50’s/barrel (basis WTI) are supply, not on improving economic con- mid-water and deepwater ? oaters.” On waters), while at the same time exercis- essentially downward sloping, with a ditions. As predicted, the prices retreated an early summer Evercore ISI podcast, ing “discipline”- which means not reac- slow glide down to around $50/barrel for as supply was quickly restored. Indica- Transocean (NYSE: RIG) Senior Vice tivating “stacked” vessels in response to positions two years out. Prices for Brent tive of geopolitical risks, oil markets saw President Roddie Mackenzie, looking short term price blips and, rather, consid- 30 Maritime Reporter & Engineering News • NOVEMBER 2019