Reinauer Group Ramps Up for the Business of Offshore Wind

The promise of a vibrant U.S. offshore wind business has been long in the making. While questions remain on timing and pace, there is renewed confidence in the offshore wind sector, particularly in the northeast United States (global pandemic notwithstanding). Investment in the sector had escalated to start 2020, embodied best by Reinauer Group and its WindServe Marine unit, which when combined with its Senesco Marine boatbuilding and logistics hub give its an ‘ A-to-Z, soup-to-nuts’ enviable position to build, own, operate boats, as well as stage logistics, for offshore wind operators.

“We want to be known as local experts in the local offshore region,” is how Josh Diedrich, Business Development, WindServe, neatly summarizes his companies value proposition. “We’ve specialized in the Northeast (U.S.) for a number of years, we know the local ports, the local infrastructure and the local waterways. We are taking that local knowledge and coupling it with this emerging offshore wind market.”

That local knowledge could be particularly important, as the New York/New Jersey area, by early estimates, look to be the clear leaders in terms of total power produced. While Massachusetts should be first out of the gate with a large scale project – Vineyard Wind, pending final permitting – states all the way through Virginia are poised to contribute. “New York and New Jersey will be the biggest markets for sure,” said Diedrich, noting that they have the most solicitations out. “For example New York wants 9,000+ MW, whereas Massachusetts is looking at 1,500 to 2,000 MW.” 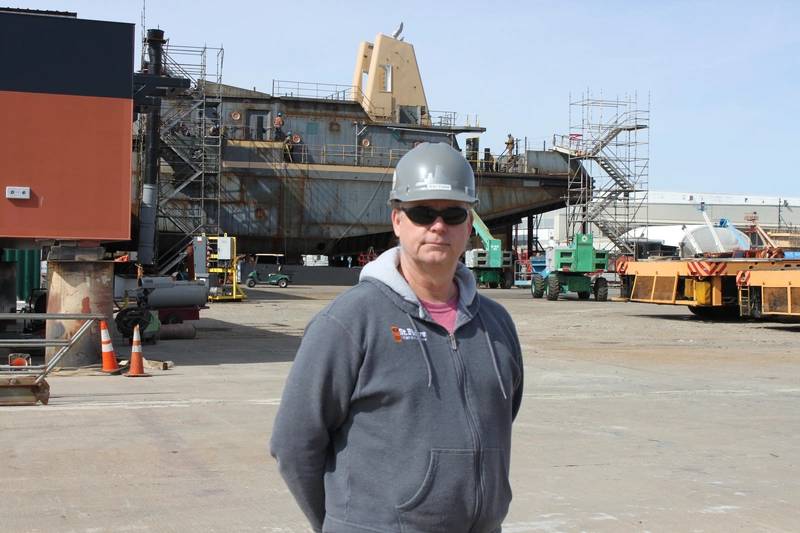 “What I see is complete difference in the types of things we build, from tugs and barges to offshore wind support vessels and structures. The market has changed, and we have a great opportunity to go after this new market.”
Mike Foster, Vice President and General Manager at Senesco MarineSomething Old, Something New
While a depression in oil pricing has sent a number of vessels serving the traditional offshore market into lay-up, there does not appear to be a tremendous demand for converting oil patch tonnage into vessels capable of working in offshore wind, as offshore wind, premised on more than a generation of experience operating in European markets, has many particulars in terms of safety and performance.

“This is a newbuild market,” said Diedrich. “Most of the developers want newbuild vessels, they don’t want to pay the price for it, but they want it purpose-built for a specific windfarm. You can retrofit something, but you won’t be able to operate in the same sea conditions or operate as efficiently as if you had a purpose-built vessel.”

For example, the preferred Crew Transfer Vessel design is a catamaran with crew transfer at the bow. “It’s bow-in at the ladder, with a flat bow so they can have a flat bow fender pushing on the tower with full thrust,” said Diedrich. “The captain can look down to see what’s going on. It has been one of the safest modes of operating in Europe for the past 10-15 years, and the statistics tell the story. It’s going to be catamarans, SOVs and helicopters for crew transfer.”

Looking at the SOV, which as Diedrich described as an “OSV on steroids”, in a newbuild versus retrofit scenario, the central area of focus is on the vessels stability as it relates to lift capacity and crew transfer gangways. A new purpose-built vessel (Diedrich estimates there will be two ordered in U.S. shipyards this year to be ready for work in 2023) allows for ideal placement of these critical elements – particularly the gangway – while a refit would likely require compromise. Once the technicians are on the tower, it’s all about ergonomics: getting them in position to do their job safely and efficiently. “They want to make sure that the technicians don’t have to carry any heavy loads, they want to make sure that everything can be rolled easily to get their tools and parts where they need them, when they need them.”

The Time is (Almost) Now
With the arrival of offshore wind in significant scale in the U.S. comes the promise of a revitalized marine industry, much as was the case for the evolution of vessels serving the traditional offshore energy markets. The big question: When will it start in earnest?

“We see 2022 will be the begin stages of heavy construction, that’s when you’ll see the first phase of vessels being needed for the northeast,” said Diedrich. (*Note: this interview took place simultaneously with the COVID-19 outbreak in the U.S.; significant information is not yet available to determine its impact on the offshore wind industry.) “Projects will start to go off, with four or five years with multiple projects.”

“The assets needed to do the job will be limited and very valuable,” he said, noting that scheduling the high-value installation vessels would be “particularly tricky” as projects start to overlap, and in tandem with the simultaneous offshore wind expansion in Europe.

“If we don’t have purpose built heavy lift vessels that are Jones Act (compliant), we’ll have to use European vessels, and there’s only a handful that can install a 12MW turbine, which is what we’re looking at here in America,” said Diedrich. Overall, he sees a 10-year period through 2033 where there will be a lot of heavy construction. “What we see on the radar now could be only a fraction of what’s to come, as other states see the development of clean energy, the employment numbers, and they’ll want to jump onboard.”

To serve the offshore wind vessel market, Senesco acquired the capability to build with aluminum. (Photo courtesy Senesco)Senesco Marine Prepares for Offshore Wind Push
While COVID-19 continues to dominate the business conversation globally, when the virus clears all eyes will be on the burgeoning offshore wind market on the east coast of the U.S. Mike Foster, Vice President and General Manager at Senesco Marine, was eager to showcase his yard’s new aluminum building capabilities and check in on the new crew transfer vessel (CTV) being built for WindServe.

Since 1999 Senesco Marine has been building steel vessels to regulatory standards, occupying 26 acres of Narragansett Bay waterfront property in Rhode Island. It is a small but efficient shipyard which literally sits in the shadow of one of the world’s preeminent navy shipyards, General Dynamics Electric Boat, the builder of nuclear submarines for the U.S. Navy.

Senesco has traditionally built tugs and barges for the energy transportation industry, including its parent company Reinauer, but Foster sees this changing.

“What I see is complete difference in the types of things we build, from tugs and barges to offshore wind support vessels and structures. The market has changed, and we have a great opportunity to go after this new market,” said Foster.

The aluminum high-speed catamaran will be powered by four Scania DI16 082M 800 hp (588kW) @ 2,100 rpm – for a total installed power of 3,200 hp – driving four Hamilton waterjets. HamiltonJet – an 80+ year old family owned company with 400 employees and a long history supplying the offshore wind sector, supplied the four HM461 waterjets integrated with its AVX controls and the JETanchor positioning system onboard. AVX is HamiltonJet’s next generation of vessel controls, its platform for an increasingly connected future in the maritime sector. The AVX JETanchor provides a range of new capabilities with three automatic operational modes: ‘station keeping’, ‘virtual anchor’ and ‘precision maneuvering’ modes. At press time the Senesco was working at full capacity, and the CTV is projected for delivery this spring. 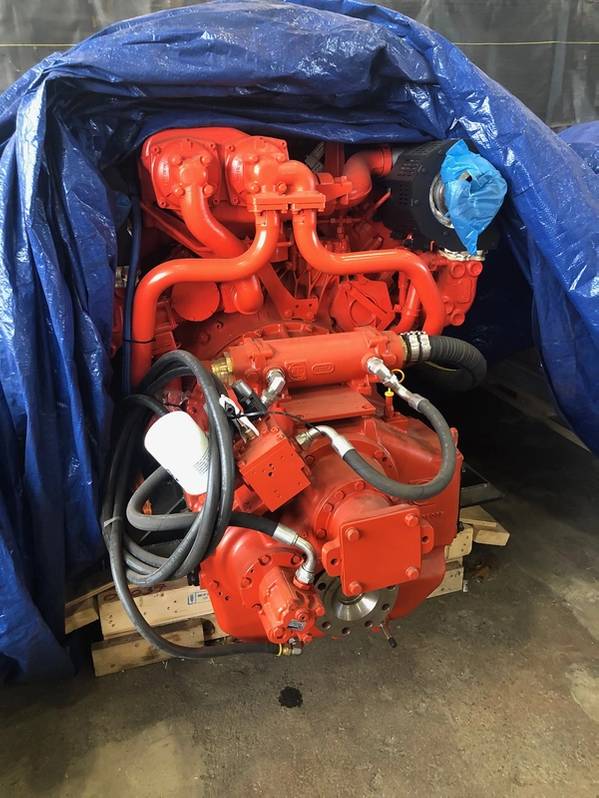 Traditional Shipbuilding Business
While aluminum vessels and offshore wind are the future for Senesco, it still maintains its traditional steel newbuild and repair work for the workboat industry, and a big driver has been, and will be, the fitting of Ballast Water Management Systems for the Reinauer fleet. According to Foster, Senesco recently completed its fourth BWMS installation, with the fifth in the works aiming for a May 2020 completion.

“Repair work has been strong of late,” said Foster, “with a big log book looking forward, particularly with the Reinauer BWMS work.”

While the yard has completed a significant number of BWMS jobs, Foster said each posed a unique challenge as none of the boats were exactly the same, with the different ATB connection systems in particular posing interesting challenges. But with the latest completion, Foster said that a corner has been turned and the jobs are no longer unique engineering jobs. “We’ve gotten to a place where we can repeat the process, same class and series. We have the engineering knowledge and the installs are becoming easier … we have the experience, knowledge and the drawings.”

In addition to the CTV newbuild and the repair work, the shipyard is in the midst of building a 4,000 hp ATB tug (Hull 218) for Reinauer Transportation, currently setting the engines, equipment and the house with an estimated delivery of September 2020. In addition it is just starting a contract for an unnamed client to build a 450-ft. bulk barge, with comes with an option.

Senesco Marine: ISO 9001 Certified
Perhaps most significantly, Senesco earned its ISO 9001:2015 Certificate in late February 2020, a development that directly driven by the growing interest in offshore wind vessel work. While Foster admits that the yard already had about “99% of the processes” in place, he said the quality stamp and certificate was necessary because when then yard meets with any of the European companies regarding building for the offshore wind market, invariably the first question they as is “are you ISO 9001 certified?”. While many of the processes were already in place, Foster sees true value in the exercise to acquire and keep the certificate. “It’s helpful to us as a company, and managers on how we manage the various processes under ISO9001 and to maintain it. It’s a roadmap to follow.” 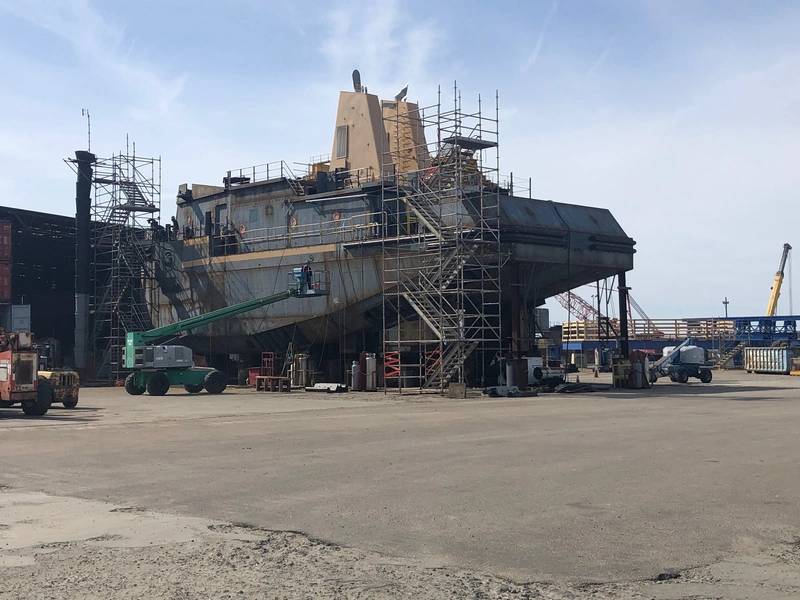 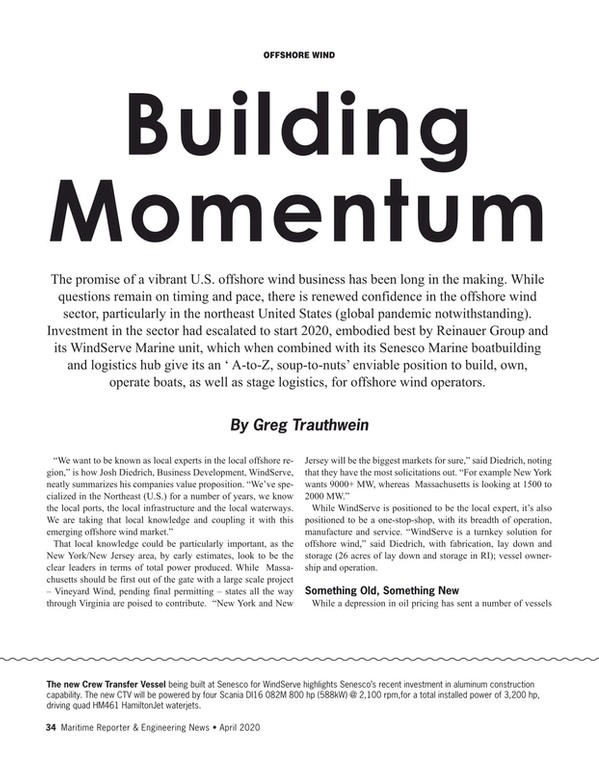 Read Reinauer Group Ramps Up for the Business of Offshore Wind in Pdf, Flash or Html5 edition of April 2020 Maritime Reporter

Other stories from April 2020 issue